COVID While Catholic: How Social Distancing Affects Spiritual Closeness In A Faith Founded Upon Participation

COVID While Catholic: How Social Distancing Affects Spiritual Closeness In A Faith Founded Upon Participation

The Catholic Church is having a moment in which laypeople and clergymen alike must maintain both the health of the body of Christ and the physical body. 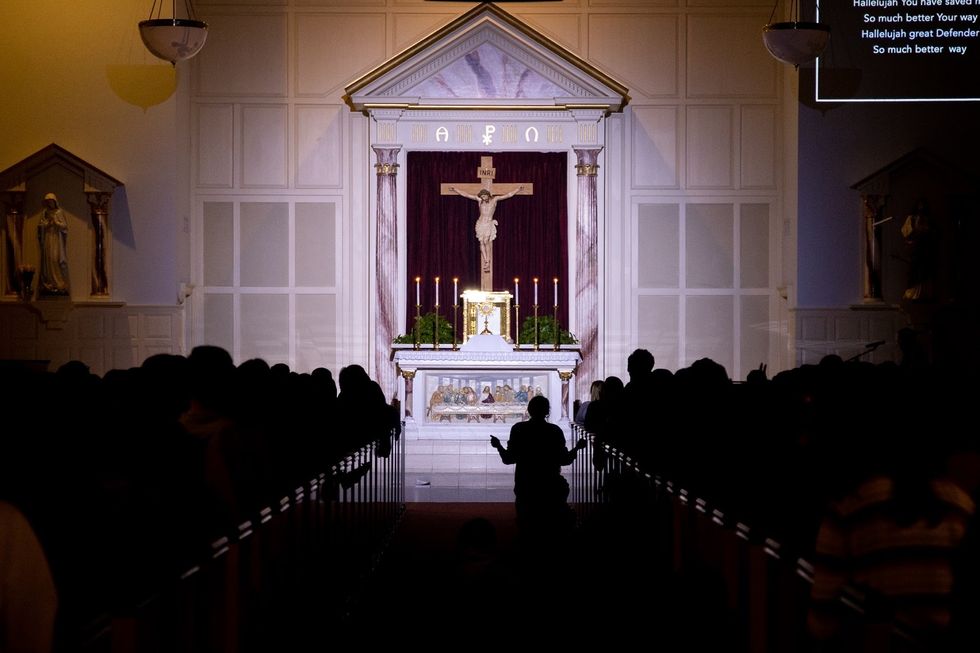 In several strains of Catholicism, salvation depends on believers' participation within the Church - so how do Catholics cope if the Church closes its doors? I set out to interview local religious experts in order to answer the distinctly Catholic dilemma during a year like 2020.

With strict guidelines on safety, Catholics in the Bryan-College Station area explain the methods in which they will continue traditional celebrations while protecting the community.

During the celebration of the Assumption of Mary holiday on Aug. 15, Catholic believers typically attend mass and processions to honor the life of the Virgin Mary. This year is anything but typical, however, the day continued to serve as an apt opportunity for learning the adaptations made by Catholic Aggies.

"The Assumption of Mary is a beautiful solemnity for Catholic Christians that honors the Blessed Virgin Mary being assumed into heaven at the end of her earthly life," Piega said. "The relevance of this celebration for our lives gives us great hope of the joys of a life to come."

Given the significance of religion and tradition within the cultural zeitgeist of Bryan-College Station, Piega said Catholicism took hold and continues to thrive here.

"Just how we Aggies love tradition, the Catholic faith continues to pass on her traditions from Jesus Christ and the Apostles to Christians in the modern-day," Piega said. "This comes from the idea that there are two sources of revelation that are given as gifts by God: Scripture and sacred Tradition. In that way, the traditions at A&M and in the Church are very similar."

St. Mary's Director of Campus Ministry Mark Knox said since Mary is a revered symbol in the Catholic dogma, the church has established a holiday specifically for her.

"Mary lived a sinless life, so when her time ended, she was in such a state of grace that she was taken up by God, or assumed, into Heaven; she didn't ascend on her own and she didn't die," Knox said. "So, that is why the assumption of Mary is something that we celebrate every year."

With COVID-19 precautions in place, Knox said there is an unprecedented nature to this year's celebration in contrast to the Church's usual protocol. On Saturday, August 15, the Church celebrated the Assumption of Mary. Typically this feast day is a Holy Day of Obligation, however, because it fell on a Saturday, it was not this year. The only masses that were celebrated were the 5:30 PM and 7:15 PM Saturday Vigil Masses.

"Normally, the day falls during the week and we have what's called a Holy Day of Obligation, which is a special feast day that we celebrate by going to Mass in big groups," Knox said. "This year is definitely looking different."

Supply chain management senior and Catholic Miranda Walker said her ability to practice the faith has been affected by the pandemic. Walker said she adapted to this reality with the accommodating innovations her religious community has made.

"Something special about the Catholic Church is the sacraments we participate in," Walker said. "Not being able to regularly participate in the sacraments in-person has had unique challenges, like not being able to physically receive the host at communion. But, right now, churches are allowing for 'spiritual communion' for those who are unable to receive it in-person."

Like many people from all different religions, Walker said she has prioritized her faith in a time that pushes people past their comfort zones.

"I've had to attend Mass virtually, which was a bit of a challenge at the beginning," Walker said. "By now, I've been able to adapt to this change, and honestly I've been able to grow in a different way during this time. Some days can definitely be rockier than others, and it's because of this that I think it's so important to come back to my faith and recognize the things that truly matter in my life."