My 13-Year-Old Sister Is Actually Cooler Than Me, And I'm Okay With It

My Little Sister Is Cooler Than Me, But I'm Learning To Accept It

I was supposed to teach her, but now she's teaching me. 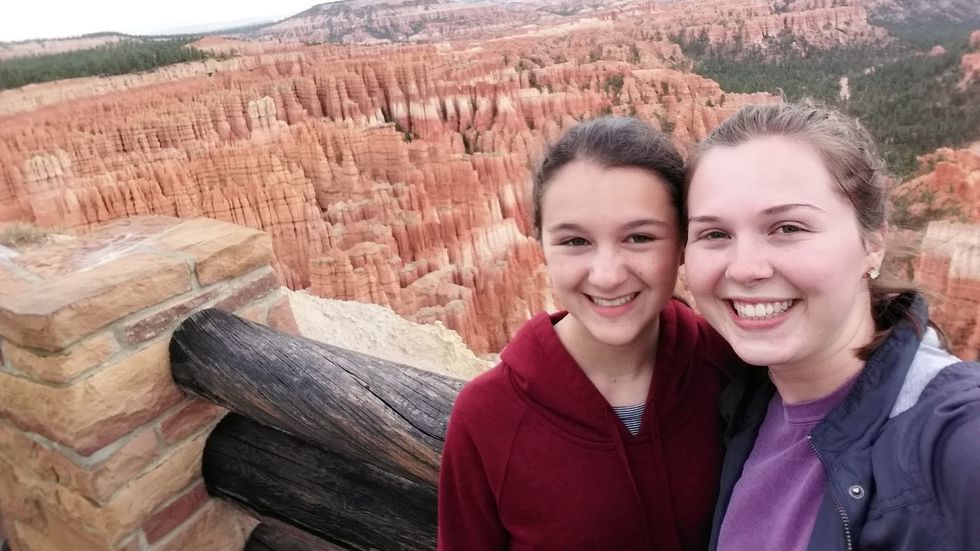 I was eighteen years old when I learned what the phrase "spilling tea" meant. It was taught to me by none other than my twelve-year-old sister. And since that day, these sisters have spilled more tea than you could imagine.

It all began when I was about to begin kindergarten. Suddenly, there was another person in the house, a baby I would try to mold into an exact replica of me. She would listen to the Jonas Brothers with me, share my love of hippos, and read all my "Magic Treehouse" books.

Naturally, none of this happened. My younger sister prefers Shawn Mendes, laughs at my absurd hippo collection, and would rather watch some YouTuber I have never heard of than crack open one of my favorite books. Before I knew it, my sister was not just her own person, but she was - dare I say it - cooler than me.

No, she did not pay me to write that last line.

I first came to this realization in my senior year of high school when a group of my friends added my sister on Snapchat. They could not believe how she had practically skipped the awkward middle school phase all of us had endured just years before (you know, the one with glittery eye shadow and cheesy shirts from Justice.) She had the humor of a high school student and the attire of one too.

I had already known my sister acted older than her age; I even took credit for it. This, however, was an eye-opener.

Could my little sister really know more about what was cooler than I did?

The answer is "yes." How did this happen? I have no idea, but it is my reality.

My little sister used the phrase "gucci" before I even knew it was a thing. She dresses more like a college student than I do, and she has a better selfie angle than most of the girls I know.

Granted, my sister still has her "middle school moments," like that one summer vacation when she kept doing this routine where she would turn her baseball cap around, announce "Middle-School Alison is back!" and proceed to dab for a solid forty-three seconds. It was annoying at times and scared a tourist or two in front of the Golden Gate Bridge, but it remains my most re-watched video from the entire trip.

As I have adapted to life on my own in college, she continues to grace me with these fantastic moments. My phone is never without a meme or two to greet me in the notifications bar, or a spiced-up story of what goes down in the halls of a 2019 middle school.

I don't understand half the things she does. I mean, why does she call everyone "boo," and when did everyone become a "sister" or a "boi?" Also, does anyone else refer to naps as "sleepy boi sessions?" I didn't think so. It is all my sister, and I love her for it.

So let her tell me which outfits make me a "stylish sister" and which songs people actually consider a "bop." I'll be there to tell her how to apply eyeshadow and talk to boys (or at least how not to.) I'll tell her what college is like in the 21st century and the reasons she should never get bangs (even if they look super cute on your Pinterest board.) I'll embarrass her in front of her friends and write articles with embarrassing pictures of her (oops, already did.)

She may be getting taller than me, and a little sassier too, but she will forever be my little sister.

Let Yourself Be Unapologetically in love