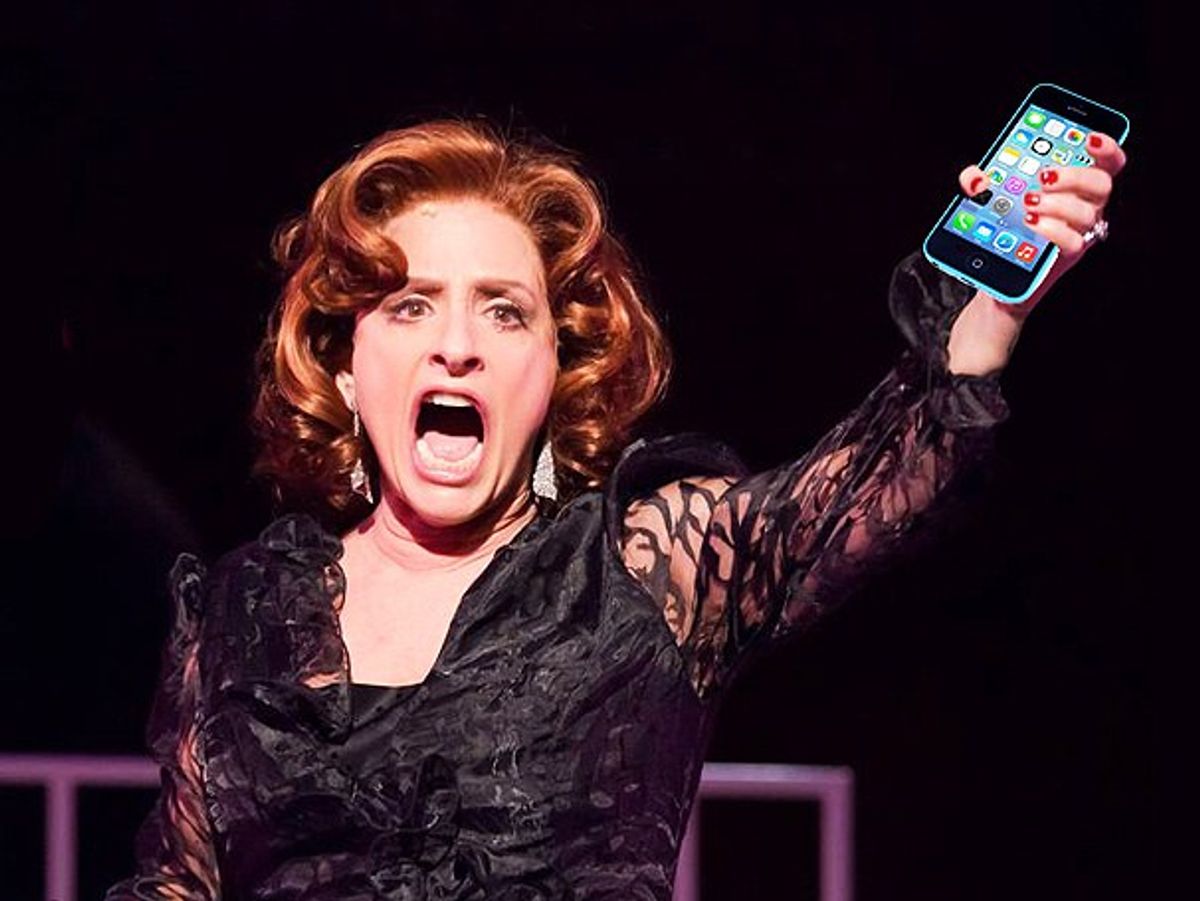 Admit it: at some time or another, you have watched an unofficial clip from a Broadway show on YouTube recorded by someone in the audience. We’ve all been there; binge-watching different Elphabas tackling Defying Gravity, watching selections from final or first performances; maybe you’ve even watched a whole show some kind soul managed to record and upload. We know it’s wrong, but if there is no other way to see a certain show or a certain cast, this may be the closest you will ever come to that experience. Are bootlegs then a necessary evil or are they harmful to the theatre experience for audience and performers alike?

Technology and the theater have a complicated relationship. On one hand, tech is an essential component of theatre in its ability to ensure the action on stage is seen and heard and that the audience is immersed in it. In the hands of the audience, however, technology can be distracting and can take away from the experience. Cell phones, as Patti Lupone would agree, are the bane of theatre’s existence. Many people cannot get them out of their hands long enough to sit down and enjoy a show. Using a cell phone during a show ruins it for everyone. This is true of recording a show, too. In capturing any moment, you are not actually in it, but rather focusing on framing it to share with others. Behind a camera—or in this day and age, a cellphone—the connection between you as an audience member and the performers on stage is severed. Not to mention recording a show is illegal, and you are reminded of this every time you are in a theater, so ignorance is no excuse.

Watching a video of a show, while tempting, also harms the people involved in a production. It breaks the contract that you as an audience member hold with them in that you are not present in that moment and you certainly did not pay for a ticket, but you still get to enjoy their hard work. You give nothing but still get to see the show—capitalists everywhere are judging you. Anyone who has seen a show live and in person knows that seeing a video of it does not do it justice. There is an energy in the room that does not translate through a screen. The experience of sitting alone watching a low-quality video is an entirely different species from sitting in a room surrounded by fellow audience members watching performers in that room at that moment.

That said, I still have trouble condemning bootlegs entirely. The reason is the inaccessibility of Broadway shows. Broadway tickets are a luxury that many people cannot afford, especially when third parties get in the mix and jack up ticket prices to absurd degrees. Add to that for those of us who do not live in or around New York City transportation and lodging, and going to see a Broadway show costs a small fortune. Lotteries help with this—$10 for a front row ticket is amazing—but much like The Hunger Games, the odds are never in our favor, and it is only really a viable option for people who can come into the city every day. We could then call bootleggers the Robin Hoods of our day, stealing from the rich and giving to the needy. Is it moral? Who can really say for certain? Broadway shows bring in so much money. They also cost a lot of money, but when a show is a smash hit, it easily makes this money back, and then goes on to make a profit off of ticket sales. Where does this money go? Back to producers and investors who were rich enough to contribute to the show in the first place, and to major stars who are already established and don’t need the show so much as the show needs them. While these stars can make up to $100,000 a week, the minimum salary for an Equity actor is $1,653. Comparatively, very little of the money you spend on tickets goes to anyone who really needs it.

If we fail to see theatre as anything more than a form of entertainment—as something superfluous—then we can justify limiting access to those who can afford it. But theatre is so much more than that. Theatre starts conversations and inspires social change. These conversations cannot just be among the upper classes; marginalized voices need to be heard, both on and off the stage.

Maybe bootlegs are not the problem so much as they are the symptom of a larger and more complex problem. The solutions, therefore, are more complex than just don’t record them and don’t watch them. The initiative to get underprivileged high school students in to see Hamilton is fantastic, and I’d love to see more initiatives like this in the future. Regional theaters are great in bringing professional theatre to people who may not be able to get to New York on a regular basis. The live televised musical trend also helps with this, but what would make them better is to have a live audience in an actual theater. I remember when South Pacific had its revival, PBS broadcasted a live concert version from Carnegie Hall that I really enjoyed. Of course, we get to see occasional numbers from Broadway shows, whether on late night TV, the Macy’s Thanksgiving Day Parade and, naturally, the Tonys.

Theatre is at its best when it is made accessible to everyone where they are. Bootlegs, for all their faults, accomplish this in a rudimentary and illegitimate way. If we want to lessen the number of bootlegs out there, we need to find other ways to bring professional theatre into the lives of people who cannot go to see Broadway shows on a regular basis.