'Coming 2 America' is a nostalgia trip

'Coming 2 America' is a nostalgia trip

Thirty years later, Eddie Murphy and Arsenio Hall welcome you back to Zamunda (and Queens) as multiple characters, once again 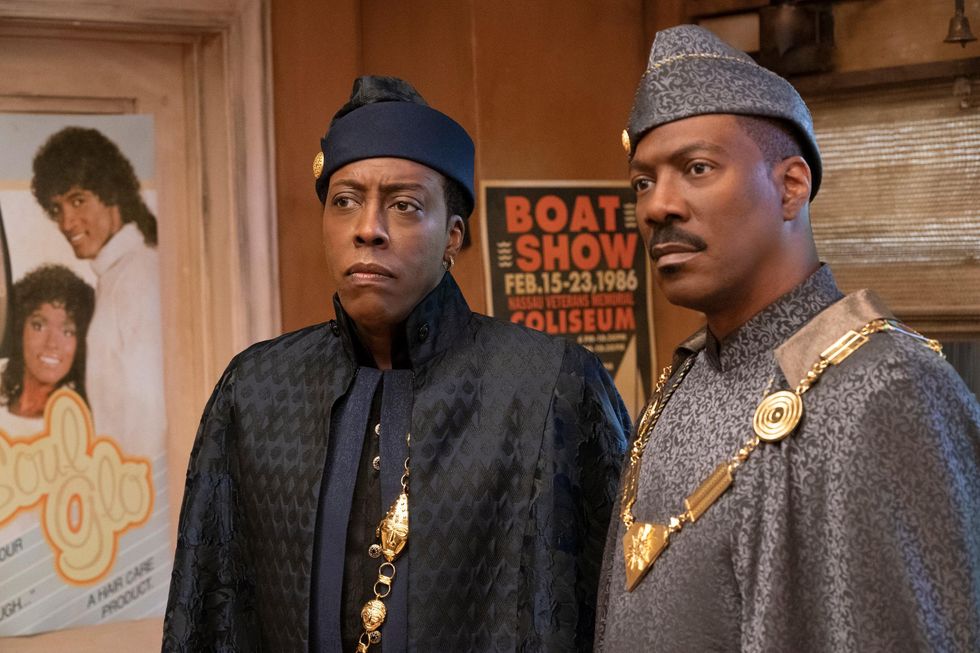 The royal family of Zamunda is back in "Coming 2 America," the sequel that seemingly no one asked for.

For fans of the 1988 predecessor, viewers can find plenty of call backs to the original "Coming To America" within this Prime Video exclusive. However, there are times when the movie makes it painfully obvious that it's not about presenting a new adventure but rather riding on a nostalgic cash grab.

In this new adventure, Prince Akeem (Eddie Murphy) is happily married to Lisa (Shari Headley), and the couple has three daughters. The oldest daughter, Meeka (KiKi Layne), loyally trains the same way her father did in hopes of becoming the next heiress to the throne. But there is a catch: as decreed by tradition and law, only a male can inherit the Zamunda throne. As the reign of King Jaffe Joffer (James Earl Jones) comes to a close, Akeem finds out he has a son (Jermaine Fowler) back in Queens from a one-night stand that the first film conveniently never showed. With a threat looming from neighboring ruler General Izzi (Wesley Snipes), Akeem and his trusty servant Semmi (Arsenio Hall) travel back to New York to meet the heir.

Thankfully, plenty of actors from "Coming To America," including John Amos, Vanessa Bell Calloway and Paul Bates, play their same respective roles in this sequel. Throw in Leslie Jones and Tracy Morgan with the "America" veterans, and viewers have a fantastic ensemble cast. However, it's a shame that their talents are wasted on over-the-top moments.

Sure the original is over-the-top as well, but the overblown personalities tastefully show how spoiled and rich these characters are. In the sequel, the characters feel outrageous just for the laughs with little narrative use. General Izzi and his army of shake weight-loving troops are the perfect examples of how excessive the movie feels.

As fun as the sequel's aesthetics look with beautiful costumes and vibrant production designs, there is one frustrating creative element: the plot. Akeem's character has completely turned around from the rebellious prince in the first movie. Do the creators of this film truly expect viewers to believe that Akeem slept with a woman after showing a huge disinterest in group hook ups and arranged marriages?

It feels out of touch with the original, and it's a huge step back for Akeem. In ways, he acts as ridiculous as his original bride-to-be who barks like a dog and hops on one leg.