Unfortunately, there's a lot more to worry about than bears, beets, and Battlestar Gallactica. 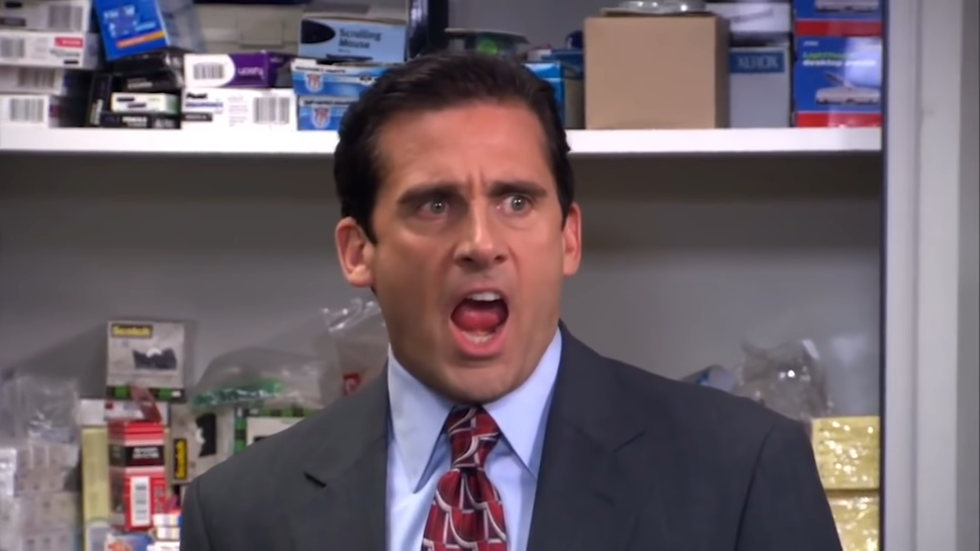 It's easy to throw NBC's hit comedy on your laptop instead of studying or even starting a new show to procrastinate with. We all know and love the characters of "The Office," and the show's success comes from the hilarity and tenderness found in small moments of everyday life. Similarly, the whole idea of college sets us up for an experience not unlike "The Office:" you find a group of people that become your family, watch those around you deal with stress in really weird ways, and find happiness in little interactions you probably don't think twice about. In more ways than one (ten, in fact), "The Office" describes the college experience pretty well.

It's going to be different this time! You're going to start waking up early, maybe even hit the gym before class, and make sure you attend all available office hours. You're definitely never going to hit snooze until 1 PM ever again.

2. Trying to maintain a social life AND good grades

There's nothing like scrolling through Snapchat stories of people screaming along to Mo Bamba while you're trying to figure out derivatives at the library. Learning to balance school and friends is probably one of the hardest parts of adjusting to college.

3. Trying to make connections and being very awkward about it

The race for internships, research, and plain survival can get really overwhelming really fast. Does your interest in your TA's fungal research seem genuine? Did you make it to the front of the swarm of nerds to get two words out to your lecturer before class? Do you have what it takes to sit in the front row and nod enthusiastically for an hour and twenty minutes? Probably not, but you're going to keep trying anyway.

4. Lying awake at night thinking about that online quiz you missed

It's happened to everyone, and the good news is that it only takes that one horrible, easily preventable zero to keep you from ever sleeping through your alarm ever again. But will you ever get over it? No. Will your grade ever get over it, despite doing well on every other one? Also, no.

5. Contemplating dropping out after exam scores are released

The aftermath of a disappointing exam grade is like the stages of grief: you begin with denial, settle into anger, and then get really sad before accepting that you messed up and that your future, as a result, is compromised. Maybe you start looking into other majors, or even calmly explain to your roommate that you're going to drop out to pursue a career as a Soundcloud rapper.

What if you don't score high enough on the MCAT or LSAT? What if you skipped the event you were supposed to meet your soulmate at? What if you finally graduate and can't find a job? So many huge things rely on every little thing going right for four years. But chances are whenever you're having a mental breakdown about this, half the other people on your floor are having one, too.

7. Convincing yourself to step outside your comfort zone

Should you run for leadership in a club, rush a sorority or fraternity, or introduce yourself to the guy next to you in lecture? College is full of opportunities, and all you need is the confidence to pursue them. Even if that means giving yourself a YOLO pep talk in the mirror for 20 minutes beforehand.

8. Putting your phone down to study, and having it suddenly wind up in your hand again

You know there's going to be nothing new when you refresh Instagram. You know you haven't gotten any Snapchats. In fact, you don't even WANT to look at your phone. But what do you do five minutes into studying? You pick it up again, not even realizing that this isn't your chemistry textbook until you're scrolling through your cousin's teammate's dad's wedding pictures from 2015.

9. Being told you're smart in high school and then realizing the opposite in college

Oh, you took AP classes in high school? Well, the kid down the hall came in as a sophomore because he earned 46 college credits before stepping foot on campus. Oh, you graduated high school with honors? Well, now you have to study triple the time to get half the grades you did then. You've entered a more fun but way more challenging new world, and chances are you won't be at the top anymore.

10. Trying not to procrastinate on schoolwork

Your brain knows it would be so much easier if you just started that paper a week before the due date. But for some reason, your body is curled up under a fluffy blanket and your eyes are glued to Netflix. Then, when you run out of time and get really stressed out about completing the assignment well, you promise yourself you'll never procrastinate again. But we all know how that's going to turn out.