My first college football game experience and how it compares to high school. 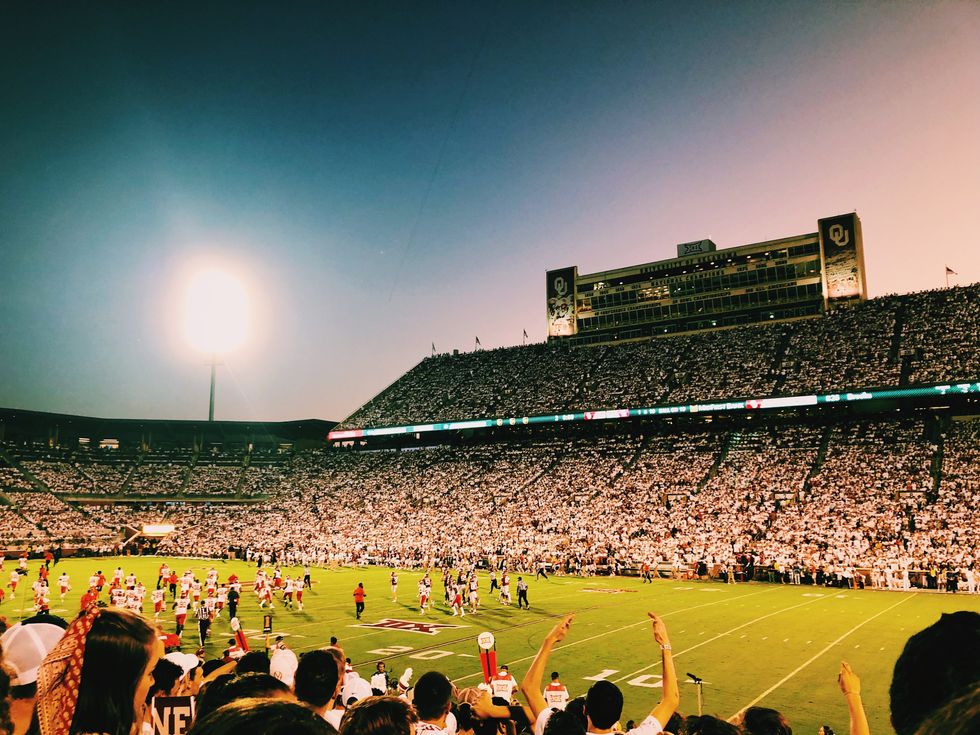 I'm from Dallas, Texas. As you know, everything is bigger in Texas, including high school football. Videos of Texas student sections go viral on Twitter all the time because it's insane! Or at least, I thought it was. I had never experienced college football, and it was a whole new level.

In high school, you don't really prepare for a football game, unless there is a theme for the student section, then you might put an outfit together. Whereas in college, DAYS before the game, the streets are already lined with banners and decorations with a stage being set up in the middle of the road. Then the day before the game there is apparently a giant town celebration with concerts, confetti, etc. Little did I know, it was just the beginning.

The idea of a tailgate doesn't really exist in high school. Games are usually on Fridays so there's not really enough time between your final class and kickoff. Also, some high schoolers don't own "proper" tailgating equipment such as a tent and lawn chairs. But college? People wake up at the crack of dawn just to line the streets and share food with strangers, it's one of the great things about America. Part of it is that it's not just the students, it's the faculty, residents of the town, and alumni from all across the country who come out just to be apart of the college football experience.

Don't get me wrong, Texas student sections are awesome, the kids go all out with signs, chants, and school spirit. College is just a whole other level. In high school, we could get a few hundred students or so, but there are THOUSANDS in college. This past weekend, the number of students was nearly too overwhelming for me. Plus, with that many people, the chants are so much better. When hearing one half of the stadium yell "BOOMER!" and the other half yell "SOONER!" you can't help but get goosebumps.

College football games are televised, therefore they are much MUCH longer. You're standing for hours on end watching, but I mean, it's worth it so I'm not complaining. Also, these guys are on their way to the NFL, so you just know that you're getting a better game.

Once the game is over, everyone has their own traditions. In Texas, everyone always goes to Whataburger and then goes home, it's just what you do. But here in Oklahoma, it's as if the party never ends. The streets and restaurants remained packed all night long. Wherever you go, there's a party.

College football is one of the best parts of being at a big university. If you didn't like football games in high school, go to one in college, it might change your mind. If you're sitting around looking for that life-changing experience or just want to feel connected to something that feels bigger than life, then go to a college football game. I promise you that you won't regret it.