Brock Turner: Why Athletes Get Away With Rape
Odyssey

Brock Turner: Why Athletes Get Away With Rape 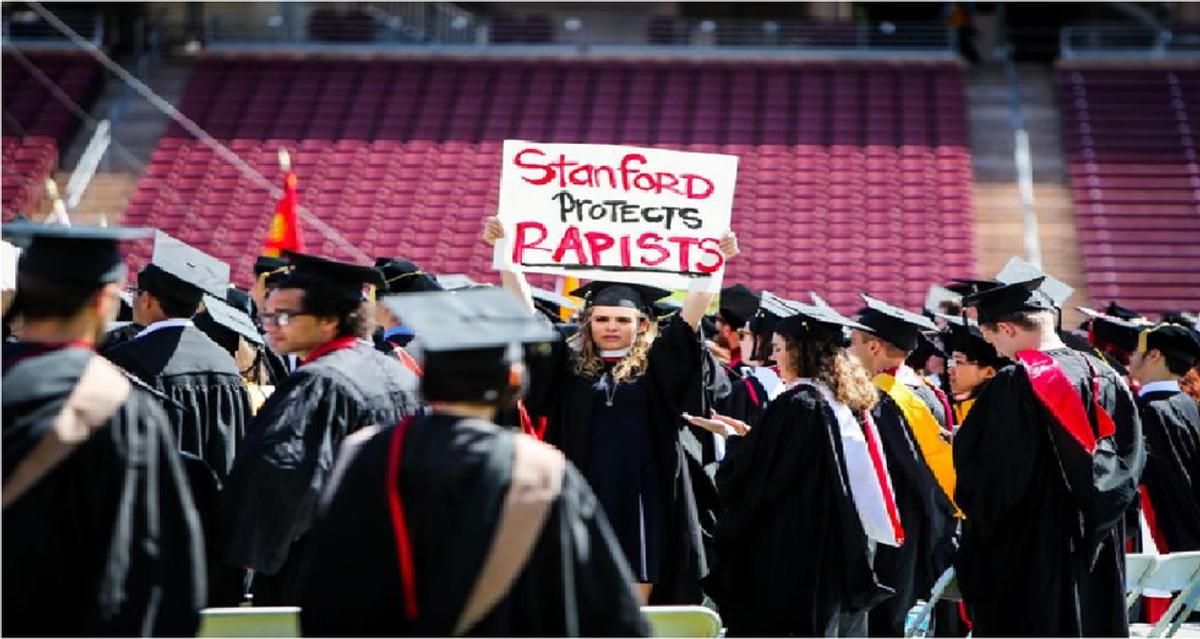 The trial of Stanford student Brock Turner is bidding for the title of most outrageous civil trial of our generation. Facing a sentence of 14 years, the prosecution pursued a sentence of six years. The presiding judge, Aaron Persky, sentenced him to six months, fearing a longer conviction will "have a negative effect" on Turner. In the end, Turner served a three-month sentence. Since his release, the outraged public has demanded an explanation.

It seems that it is actually not uncommon for college athletes to face little or no jail time. CNN reported a Sociology of Sport Journal in 1997, which had found that even though athletes are more likely to be arrested for sexual assault than normal people, they are less likely to be prosecuted to the full extent of the law, which "based on the analysis of 217 criminal complaints, the study found that 54% of arrests in the general population for sexual assault result in conviction, compared to 31% of athletes arrested for sexual assault." This heightened status of athletes helps in cases of "he said, she said" cases. In turn, the overturned cases then perpetuate victim blaming in the population. Of course the prestigious student-athlete, a role model in the community, only made a mistake while the victim was asking for it by the way they dressed or acted.

Most of the cases that make it to trial happen to hinge on the issue of consent. Charges are more likely to not be pressed or plea deals are bargained. Schools have a tendency to protect star players and at many documented times, do not report the incident (CNN). There are two factors that mostly play into this: the victim's own doubts on justice and the revenue the athlete brings in.

Most victims report knowing their assailant. In the case of college athletes, most victims were friends, former lovers or occasional flings. The setting was generally in a party or other social setting, with many confounding factors, such as alcohol. With rape cases among the general population facing a lower than desirable conviction rate at 54% it is reasonable for the victim to take a plea deal. With athletes being held in higher esteem than the average person, the jury is likely to be inclined to believe the "popular jock" over a victim. Prosecutors look to the corroboration of the victim's claim and the credibility of the victim to convince a jury. Many prosecutors do not even take cases unless there is video or eyewitness evidence. The only reason Turner was even arrested and put to trial was because there were two eyewitnesses who were present and stopped the assault. Even with indisputable evidence, Turner went from facing 14 years to serving three months.

In addition to his/her own status, the universities themselves cover for athletes because of the insane amount of revenue brought in by sports. For example, football programs at the University of Texas, Austin gained $92 million last year, according to Forbes magazine in 2015. Third on the rankings is Louisiana State University with expected superstar Leonard Fournette which gained $58 million. Each athlete provides a large amount of funding that universities turn into high-end education facilities or better wages for teachers. So while getting an audition for a possible future in pro sports, these athletes provide monetary support to an increasingly unstable student loan bubble. Players like Fournette, Stanford's Christian McCaffrey, and UCLA's Josh Rosen are just as important to the school as some of their top professors. Therefore, the services they provide lead to a much more lenient attitude towards them, with the local population lauding their success and the universities focused on continuing a steady stream of cash. In 2014, Baylor superstar and current Browns quarterback Robert Griffin III had brought in $14 million by simply giving Baylor more national attention in his Heisman campaign. To put this into perspective, Fournette and McCaffrey were in the race last year with McCaffrey being the runner-up. The more popular an athlete is, the more ways a school can get money or exposure. New recruits and prospective students look to the athlete's success and help to shape the future of some universities. Therefore, to turn in an athlete on a sexual assault charge would mean a dip in steady profit, therefore keeping justice from happening.

The solution to this epidemic is just as hard as prosecuting the student-athlete. On the legal side, California recently approved a bill to mandate prison time for sexual assault perpetrators. The ideal solution, and most popular, is to instate a mandatory minimum on a federal level. Mandatory minimums will require a certain prison sentence and will make sure another Aaron Persky situation does not happen. No "assumed good behavior" will be able to let the perpetrator out early, like in the case of Brock Turner. However, this can only go into effect if the rapists are brought to court in the first place. The government must have the participation of the schools to overlook profit and to focus on justice and morals. Possible solutions must also focus on only punishing the people responsible. Cutting funding to a school or sports team only then harms those participating, such as the students trying to live a normal life. A possible fix for reporting can be providing extra incentives to programs who report sexual offenders, incentives greater than the athlete's worth to the university.

There is no perfect world, yet there is no reason not to strive for perfection. In a huge step to end victim blaming, it is important for the Brock Turner issue to be addressed. Judge Persky said a lengthy sentence could "jeopardize" his future and Turner's father blamed the victim for making his son make a mistake. In this case, abuse was hidden for greed and the victim is blamed for "hurting" her attacker. It is finally time to learn the lesson presented to us. Women should be allowed to wear, dress, and act however they want, without the fear of getting sexually abused. We are all equals as humans and should be treated as such.