Why #BoycottTheBefore Is So Important This NEDA Week
Odyssey
CurrentlySwoonLifestyleHealth & WellnessStudent LifeContent InspirationEntertainmentPolitics and ActivismSportsAdulting
About usAdvertiseTermsPrivacyDMCAContact us
® 2023 ODYSSEY
Welcome back
Sign in to comment to your favorite stories, participate in your community and interact with your friends
or
LOG IN WITH FACEBOOK
No account? Create one
Start writing a post
Health and Wellness

Why #BoycottTheBefore Is So Important This NEDA Week

"Now that I see how comments, beliefs, and transformation photos can have negative effects, I have this fire within that wants to speak up for myself and others who feel the same.” 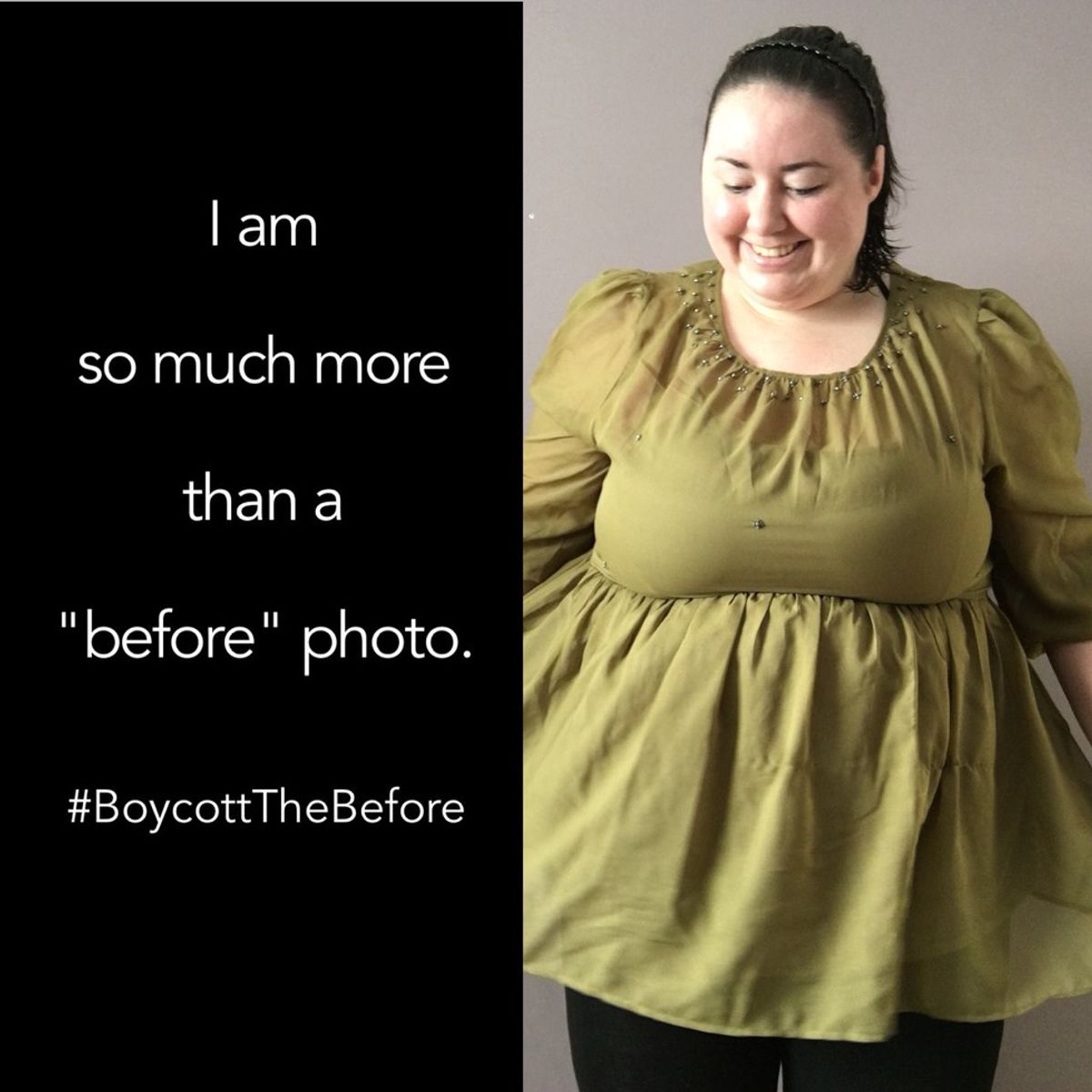 On February 16th, 21-year-old Lexie Louise, creator of @soworthsaving, started an amazing Instagram campaign called #BoycottTheBefore, which is an effort in the ED (eating disorder) recovery community to boycott posting “before” photos because these photos tend to reinforce the idea that eating disorders can all be seen visibly and diminish the true mental struggles that these disorders entail.

Lexie says that she was inspired to start #BoycottTheBefore because she “felt as if something was off in the ED recovery community.” She also said that she felt like the “before” photos (which she also has posted in the past and recently decided to delete because of learning new perspectives) didn’t “accurately portray the real emotional and mental anguish we face when we are struggling” and that it felt like what was being shared was one-dimensional, misleading, and potentially triggering. Lexie continued to say, “I also feel like there is a huge misrepresentation of the word “struggling” in and outside of the recovery community. Outsiders - those whom we are trying to educate through sharing these photos - do not see the whole picture. They commonly mistake weight-restored, or even someone’s consistent weight, as “recovered” and deem them to not be “struggling”. From my perspective, that is incredibly dangerous.”

I asked a few members of the Instagram community who participated in #BoycottTheBefore some questions to get more perspectives on the importance of this campaign:

What inspired you to participate in #BoycottTheBefore?

Kar (@namastenourishedd) said, “I can see both sides of the spectrum...I feel like this is a better standard, it doesn’t matter what you looked like then, this is what you look like now and that’s really cool.”

Michelle (@bodyposipower) said, “When Lexie made her first post regarding the hashtag, I immediately felt moved by it. This past year was one of the first years I’ve been comfortable with discussing the way I eat, the struggles I’ve had with binging, and the relationship I have with food. I find something so magical when a group of folks who are all experiencing similar struggles can get together and actually talk about it. I think it holds a bit of therapeutic and healing attributes.

Mads (@mindovermads_) said, “I have posted transformation pictures before because I like to think about how far I’ve come from the place I was in before. But, they are harmful to how people perceive me, the way they perceive others who don’t have the standard “before picture”, and they definitely don’t show the whole story. They only show two days, two mindsets out of the whole journey.”

What’s the biggest thing you want people to know about eating disorders?

Kar (@namastenourishedd) said, “I want people to know that EDs come in all shapes and sizes, and they don’t discriminate. It affects everyone.”

Michelle (@bodyposipower) said, “Your ED is VALID. You are VALID. As someone who has always been considered “overweight”, sometimes EDs are dismissed or not recognized because of our physical appearance.”

Mads (@mindovermads_) said, “Everyone is different, and your mental health is not dependent on your appearance. Eating disorders come in all shapes and sizes! You cannot tell how sick someone is from the outside. Eating disorders look different on everyone no matter whether they are currently struggling or if they are in recovery.”

Sam (@sams.freedom) said, “People who suffer aren’t always underweight and may not look ill. More often than not they are actually a healthy weight. Because eating disorders do not have one look - they are not a number on the scale or the size of your jeans. The severity of mental distress and pain have no weight requirements. Pain is pain, and struggle is struggle. And it is not dependent on your physical health or specific eating disorder diagnosis. What I went through was real and horrible, and I don’t need to prove that to anyone.”

Lexie (creator of the campaign, @soworthsaving) said, “The most important thing I want others to know about EDs is that they are real, valid, mental illnesses that can happen to manifest in physical ways through weight loss or weight gain. The key point here is that we cannot see who has an eating disorder. The idea that we can see who is struggling is subjective and very well could be fueled by misconceptions, like how so many of us share our transformation recovery photos.”

My Take on the Campaign

I personally was very inspired by this campaign, and I also decided to participate. I have struggled with disordered eating for a number of years, and oftentimes seeing “transformation” photos was very invalidating and triggering for me because I had never become clinically underweight, even though I was truly struggling for a long time. Seeing such a wide array of experiences and stories through this campaign has helped drive home the idea that disordered eating is not a “one-size-fits-all” struggle, and it was very empowering to see so many types of people sharing their stories. My body positive/self love Instagram can be found at instagram.com/leenahlovesherself.

Lexie says, “Overall, the message I’d like to convey with this campaign is that you do not need to “look the part” to struggle. If I saw the #BoycottTheBefore campaign while I was in treatment for my ED, I believe it would be impactful on me. And that’s so important to me because I can picture my 15-year-old self in residential treatment seeing the campaign for the first time and feeling understood. I am 21 now, but at 15 I was certain I would never be taken seriously enough to be considered for treatment. The moment I started speaking up for myself was the moment serious repair and healing could begin for me in recovery. Now that I see how comments, beliefs, and transformation photos can have negative effects, I have this fire within that wants to speak up for myself and others who feel the same.”

If you or someone you love is struggling with an eating disorder, visit NEDA at www.nationaleatingdisorders.org, call NEDA’s toll-free Helpline at 1-800-931-2237, or text NEDA to 741741.