This Is Why I'm Boycotting Starbucks
Odyssey

This Is Why I'm Boycotting Starbucks

Coffee is for waking your brain up, not brainwashing you. 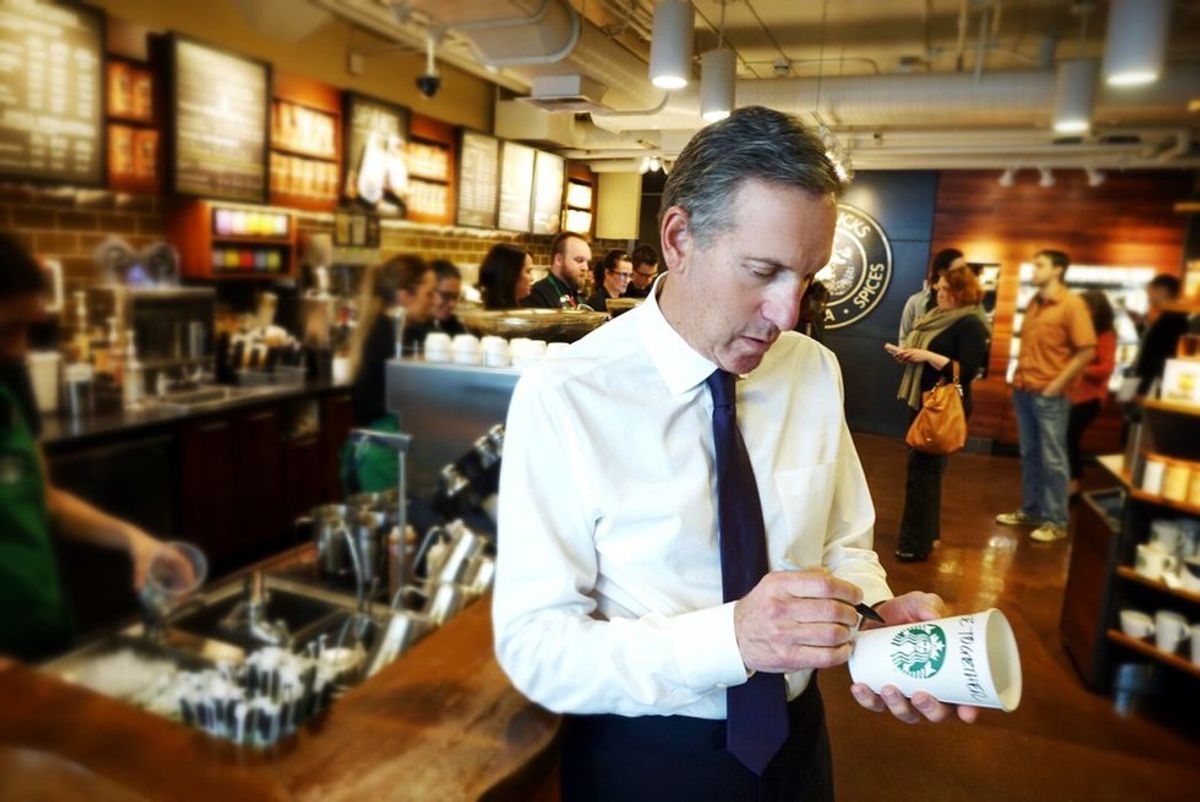 Last year was bad enough with Starbucks' war on Christmas. If you're unaware of that whole scandal, Starbucks basically replaced their usual holiday cups with these atrocities in 2015:

I mean come on, plain red holiday cups without a single decorative, Christian icon on it?! The audacity is numbing. Not including Christmas images is a direct stab to the entire holiday spirit. Christmas is the only real holiday of the whole season, after all. Replacing the traditional images of Christmas trees and ornaments that have typically been on Starbucks holiday cups with this plain red war field is clearly an attack on Christmas, and therefore Christianity, and therefore American history, American values, and the very fabric of America itself.

Joshua Feuerstein, hero to all true Americans and savior to anyone who has an inkling of respect for family values, articulated it best when he said that “Starbucks REMOVED CHRISTMAS from their cups because they hate Jesus."

He's completely right; Starbucks has clearly partnered with the Devil in defying Jesus. Without a pretty ornament on their cups, how are we supposed to know where their loyalties truly lie? For all we know, they could even be—*gasp*—Muslim!

Before you get too caught up on that possibility of national treason, though, don't forget that there is more to the story. All of that is only last year's drama.

This year, Starbucks has moved past blatant propaganda against Jesus Christ and onto straight-up political brainwashing.

This year, on November 1st, Starbucks introduced this travesty:

The heinous principle they are promoting?

This crime of a container is called the "Unity Cup" and features a wide variety of people all strung together by a singular line, embracing. It was designed by artist Shogo Ota who said he hoped it would demonstrate "stitching people together as a united community." From baristas to friends to farmers to Ota's own mother, all of the figures are connected.

The art itself is mediocre, honestly. The entire design is quite literally just one line—how hard can that be? If Starbucks is going to brainwash their customers with a coffee cup they should at least use some decent drawings.

Forget the silly lines—excuse me, line—for a moment, though. What's more important here is the message that Starbucks is sending: a message of left-wing extremism, radical enough to support the idea of unity between people. Howard Schultz, Chairman and CEO of Starbucks, commented on the purpose of the cup, saying that "during a divisive time in our country, Starbucks wanted to create a symbol of unity as a reminder of our shared values, and the need to be good to each other."

The need to be good to each other? At best, this is some hippie wish-wash about world peace that they're trying to plague us with. At worst, this is an act of war against capitalism, human nature, and the very essence of life as we know it.

Next thing you know, they'll be telling us to pool all of our incomes together to be distributed equally amongst the populous, or suggesting that the whites are not actually a superior race. This idea of unity is as radical as feminism, the Black Lives Matter movement, or liking puppies and ice cream.

Frankly, I just don't understand how a company previously so successful could be dumb enough to make such an alienating business decision, by getting involved in the current election with a stance as partisan and polarizing as unity and kindness.

Luckily, there are still a few human beings left in this sad, sad world who have a little bit of common sense. Those heroes took to Twitter after the release of this new Starbucks cup, and will hopefully start a successful uprising against these corporate (and now political), bourgeoisie tyrants:

Sickening it is, Patrick. Now, it's worth noting that these cups are reported to be temporary, and not this year's actual holiday cups, but the point still stands it simply crosses the line. If anything, producing the cups temporarily at this moment just makes the crime even worse, by directly tying this disgustingly partisan propaganda to the election. My new fave Twitter user thought the same thing:

They also don't expect to have radical views pushed upon them as forcefully as through the cups they drink out of.

Shoving this kind of communist-esque rhetoric about unity down our throats—literally—via innocent coffee is unacceptable, and I've consequently decided to boycott Starbucks entirely.

I refuse to let some corporate giant tell me that I should make connections with fellow members of my species, or try to form a sense of unity, or be good to other people. If we let them tell us that, these left-wing radicals will soon be controlling the entirety of our lives, with Starbucks as the divine power and with King George The Third replaced by King Howard The First. You, too, should consider dropping Starbucks "like a hot rock," because let's face it, we need to #MakeAmericaGreatAgain.

Give me disunity, or give me death.