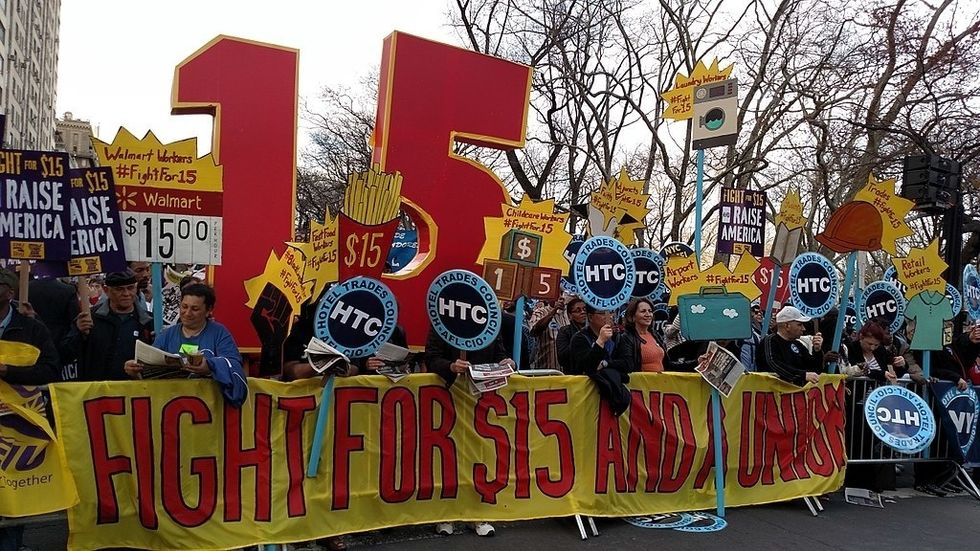 This article combines Brant's points of price floors and unemployment with the introduction of institutional racism. This article has three points. First, that minimum wage laws were first conceived as a eugenist tool to hamper black progress. Second, because contemporary black youth are disproportionately impacted by minimum wage increases, the effects make it a mild form of institutional racism. Lastly, I critique the social justice 'vision' that ignores the consequences of minimum wage and allows these economic fallacies to flourish.

I have covered the racist origins of the minimum wage in a separate blog post here, however, I will summarize it for your convenience.

Starting in the 1890s and ending around WW2, a movement known as Progressivism took root in the United States. Progressivism was based on the belief that the government should regularly intervene in the economy or society in general to achieve certain "social goals." At the same time the eugenics ideology, which is focused on improving the population through selective breeding, became the dominant intellectual doctrine of the time.

Historian Thomas C. Leonard best summarized how the combination of these two ideologies led to the use of minimum wage as a tool of artificial selection when he wrote:

Minimum wage laws are price floors. Price floors produce a surplus. A surplus of labor is called unemployment. As economist Thomas Sowell notes "Surplus resulting from minimum wage laws makes it cheaper to discriminate against minorities than it would in a free market (pg. 158)."

In fact in 1949, a recession year, the black unemployment rate was lower than at any time in the 1960s. A time characterized as an economic boom.

Vernellia R. Randall, Professor Emeritus of Law at The University of Dayton, defines institutional racism as:

polices, practices, and procedures of institutions that have a disproportionately negative effect on racial minorities' access to and quality of goods, services, and opportunities.

On June 1st, 2016, 14 states, cities, and counties raised their minimum wage. Coincidently the unemployment rate for black male teens (aged 16-19 years) increased by 12%. This is the highest monthly increase, other than the 12.2% increase following the Great Recession since the BLS started collecting this data.

One study found that for every 10% increase in the minimum wage, black youth (16-24-year-old without a high school diploma) employment fell by 6.5%. This is compared to only a 2.5% decrease for their white counterparts.

When focusing on the 21 states fully affected by the federal minimum wage increases in 2007, 2008, and 2009, the study found that the hikes decreased black youth employment by over 32%. This was 40% higher than the estimated effects on unemployment caused by the Great Recession.

About a third of black youth (aged 16 to 24 without a high school diploma) work in the restaurant and food services industry (page 5). Another study looking at the effects of minimum wage on restaurants found that a "$1 increase in the minimum wage leads to approximately a 4 to 10 percent increase in the likelihood of exit [from the market]."

It's amazing our minimum wage supporters refuse to face the fact that black men are harmed by minimum wage increases. However, this a feature of the typical social justice worldview- ignoring cost and consequences.

Visions are how we perceive and judge the world. Built on visions, are theories. In order to turn a vision into a theory, one must apply logic to test theories with facts.

The vision of social justice activist is beautiful, who wouldn't want people to be paid a living wage? As wonderful as this is, the minimum wage is not a good solution. So why do minimum wage supporters outnumber opponents?

For starters Americans as a whole, hold systematically biased beliefs surrounding economics. Going back to visions and theories, what social justice activist and minimum wage supporters have is a vision, a theory, and facts, but they've forgotten one thing- logic.

It makes sense to force businesses to pay higher wages. What is missing from this theory is logic.

Logically one would ask "where do these wages come from," or "at what cost?" However, for many minimum wage supporters logic has no place in theorizing and challenging their vision.

Which brings me to my critique of the dominant social justice vision- there is no recognization of the consequences of the minimum wage. There is no critical assessment of the cost or even alternatives.

When supporters ignore the consequences of minimum wage increases, they harm a group they claim to want to help.

The minimum wage was conceived out of racism and continues to have a disparate impact on American workers. Because black men are impacted greatest by it, the minimum wage is another example of institutional racism.

Sadly, even when presented with the consequences, social justice activist stand by the minimum wage.

Californian Governor Jerry Brown, when signing into law a minimum wage, confirmed this sad fact when he said:

"Economically, minimum wages may not make sense. But morally, socially, and politically they make every sense because it binds the community together"

I wonder if it makes sense to the hundreds of thousands of unemployed black youth.

Madison Franz
The Narrative
1117384
Photo by Brooke Cagle on Unsplash

Madison Franz
The Narrative
654302
Photo by Manny Moreno on Unsplash