How Beyonce Ruled the VMA's (And the World)

How Beyonce Ruled the VMA's (And the World)

For those who still doubt her artistry. 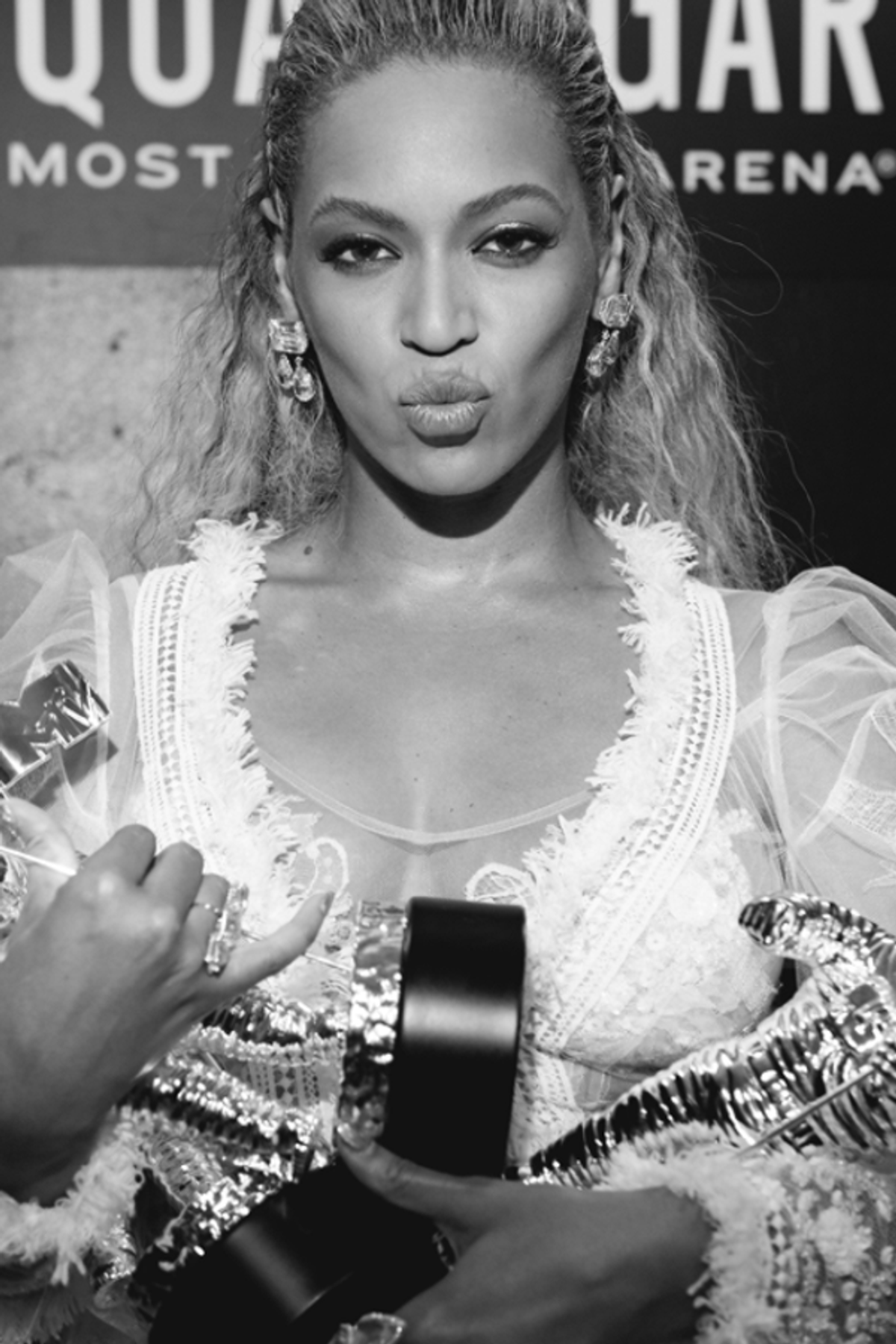 Like many, I watched the VMA’s this past Sunday. Let’s admit it, the past few years’ shows have been anything but superb. From that Robin/Miley wannabe twerk-a-thon (which, by the way, ruined foam fingers for me) to Kanye stealing Taylor’s limelight to proclaim Beyonce’s “Single Ladies” video was the best of all time (*cough* which it was), the VMA’s have always been a stage where artists could let loose a little. Beyonce debuted her baby bump and Lady Gaga wore a meat dress! Anything can happen. My personal favorite though will always be Fiona Apple telling the truth. Back to today, this year’s VMA’s was like all the others; highs and lows, cute and ugly, good, bad and the absolute worse.

One part of the VMA’s that made the show was Beyonce. In true Beyonce fashion, she was the headliner and everyone else was just the opener. (Except for Rihanna, who was given the Michael Jackson Video Vanguard Award aka a lifetime achievement award. As she performed 4 times, each electrifying in their own way, she would be the co-headliner.) In her 15 minute performance, she truly defined and owned the word legend. When I hear people complain about her being too overrated, I truly don’t understand. That isn’t just Lauren the fan saying that, it’s me the music and pop culture lover who wants be blown away by an artist’s performance.

Let’s go over last night: Britney is great, don’t get me wrong; she’s survived the lowest lows and came back when no one believed in her. While we saw her with great choreography, she wasn’t singing live (something she’s become known for.) Ariana Grande and Nicki Minaj did a damn good Soul Cycle routine, but it seemed a little too flat. Future did Future. Nick Jonas did something with a diner and bacon. Chance the Rapper didn’t perform sadly. Kanye premiered his “Fade” video, which made everyone’s jaw drop with the ever so fit, beautiful and talented Teyana Taylor. Anyways, you get the point. So let’s go ahead and explore Beyonce’s stunning night.

Let’s back it up all the way to the red carpet:

Not only did she bring all the beautiful women who starred in her Lemonade film, but the mothers of Trayvon Martin, Eric Garner, Michael Brown and Oscar Grant III. They were also in Lemonade as she brought awareness to the Black Lives Matter Movement. The women looked majestic as the graced the white carpet. Only Beyonce can pull off something like that. Blue Ivy, who, understandably so, wasn’t having any of the photographer’s mess, made an appearance too!

As for the performance, she sang a medley of Pray You Catch Me, Hold Up, Sorry, Don’t Hurt Yourself and Formation. Not only did the stunning visuals steal the show, but the poetry from the original film was also added before each song, which made it that much better. The woman behind it, Warsan Shire, is a treasure if you didn’t know.

She took the stage with “Pray You Catch Me,” a ballad confirming her fear of her man cheating. When Beyonce has that look in her eye, you know something is about to go off. Her vocals, for those who still don’t believe she can sing, were better than ever. And live!

From “Pray,” “Hold Up” began. I know I, like many, have been in that situation of looking jealous and crazy when confronting a partner, demanding to know where he stands. And you belong together, they don’t love you like I love you. The bat used in the video, labeled hot sauce, also made an appearance as she broke a camera. Whoops!

Next up, my personal favorite: “Sorry” It’s that defiant, I don’t give a damn song we’ve needed. (No joke, I listen to this whenever I get upset over a boy.) She gives the middle finger and calls out Becky with the good hair. Sorry not sorry.

Then she came and blew us away with the angry “Don’t Hurt Yourself” With Jack White in the chorus, it’s the peak of Beyonce’s anger. It’s the last straw before this man’s ass is gone. When you play me, you play yourself.

Lastly, “Formation” Personally, I would’ve loved “Freedom” to end it, but her and Kendrick Lamar already took it to the next level. Formation is all about Black girl magic. This song isn’t for me, but I will always dance to it. This was also the song some considered to be anti-police because of the powerful video. It caused controversy as she performed it at the Super Bowl, but it doesn’t matter because Beyonce slays.

At the end, as the camera went to a full stadium shot, you see the dancers have lined up to create the symbol for female. Just like her previous VMA performance where Feminist appeared on the large screen behind her, she always makes you notice.

I can’t truly put into words Beyonce’s work ethic and how much she values production. She consistently put in so much effort to create these performance, stunning visual, short films, albums. I dare you to find an artist today that puts this much work in for her art. It's not just a performance when it comes to her, it's an experience. Above all, she does it humbly and gracefully. You don’t have to agree with what she says or like her music, but undermining her work is ridiculous. She’s Queen Bey for a reason and she’ll go down in history books.