What are banned books and how should we feel about them as readers? 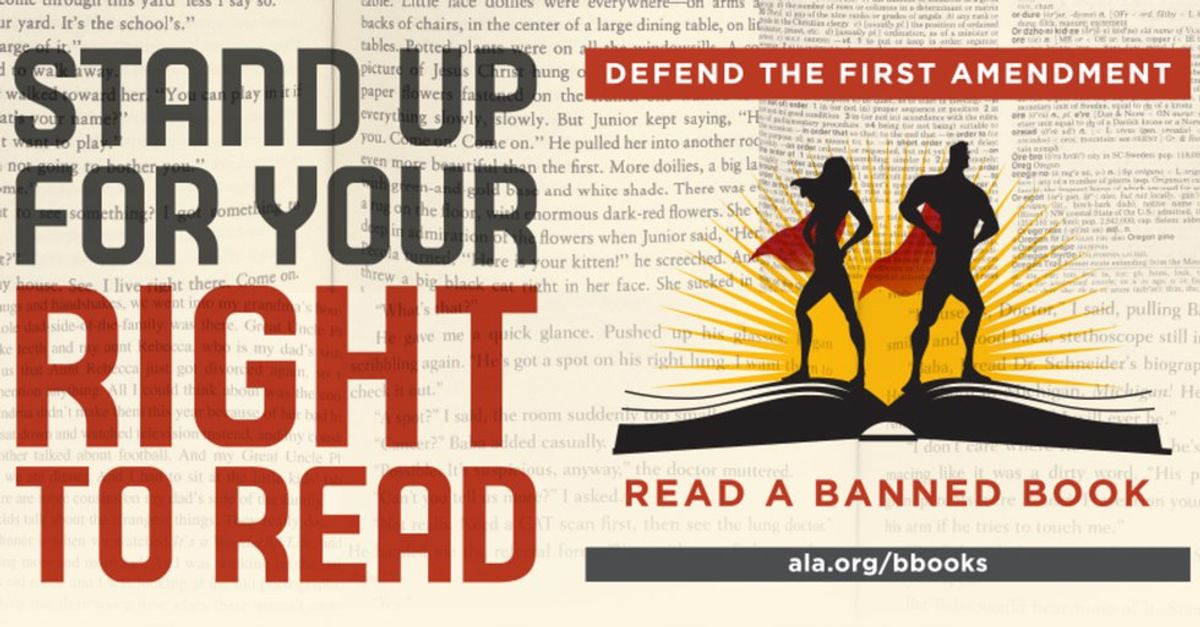 When I learned as a young teenager that some parts of society takes banning books seriously, it was baffling. In my own household, there was never much censorship. When I found something interesting to read, I read it. End of story. There was no debate on taking away what should be read because my parents taught me that it was my right to learn and explore the world.

The end of September and beginning of October were bridged by the annual celebration of Banned Book Week. This may seem like an odd concept. Celebrate banned books? The idea of a banned book may seem like something that should be avoided. Surely in a country with freedom of speech, a book must be awfully horrible to be considered for banning.

In reality, banned books encompass some of the most popular American literature. More times than not, these pieces of literature are placed on these “bad” lists because of what they talk about. Sometimes they talk about “touchy” subjects for a younger audience that some parents believe could not handle it. Other times, these are books that might spark a social change.

Since 1982, 11,300 books have been challenged due to a variety of reasons. According to the Office of Intellectual Freedom, the top three reasons for books to be challenged are as follows: sexually explicit material, offensive language, and unsuitable for “any” age.

Between the years of 2000 and 2009, 5,099 challenges were made to the Office of Intellectual Freedom. These are the reasonings in order of most common; sexually explicit, offensive language, unsuitable for a given age group, violence, homosexual references, occult or Satanic themes, religious viewpoints, and lastly “anti-family.”

According to the American Library Association, the following contains reasons why books were banned in 2014.

As mentioned before, Banned Book Week was celebrated the last week of September and into October. When celebrated, one of the focal points was the ten most challenged books from 2015. I have read a total of three and will give a little snippet after the list.

1. Looking for Alaska by John Green

3. I am Jazz by Jessica Hethel and Jazz Jennings

4. Beyond Magenta: Transgender Teens Speak Out by Susan Kuklin

5. The Curious Incident of the Dog in the Night-Time by Mark Haddon

I have not read all of these books, but the ones that I have I did enjoy reading. Looking for Alaska was one of those books that I had to read all in one sitting. It is an addicting story that pulls you in. However, it does deal with some very serious topics: alcohol and suicide being two of them. Why should that affect if you read it or not? It should not. The book is written in a way where the reader is able to discover a lot about themselves, the characters, and the impact of suicide. If you have ever struggled with the issue of self harm or suicidal thoughts, I would definitely tell you to read this eye-opening book.

One of my favorite books of all time also appears on this list. The Curious Incident of the Dog in the Night-Time might be a mouthful to say but it is not as much of a mouthful to read. It is a fairly short piece written from the perspective of a boy with Autism.This points a spin on his perception of life. He does not quite see things the way that everyone else does; however, he comes to conclusions on a basis that is made understandable to the reader. Although this book has some strong language and sexual points, I did read it in school my senior year of high school. I loved every page of it and now recommend it to everyone I know who enjoys reading.

Aside from that, I have not read the whole Holy Bible but I have read enough of it to find that there really is not much of a reason to ban this in America. I thought that we had a freedom of speech and a freedom of religion. There are a variety of topics covered in the Bible, because it is meant to talk about all aspects of life. It is meant to help you see what God (if you believe in him) wants you to live like. Apparently, it is being challenged for "religious viewpoint." I wonder why it has a religious viewpoint?

Although this list is very important to where we stand today on literary viewpoints, banned books are bigger than these ten books. Banned/challenged books span decades and impact thousands of titles that are read inside and outside the classroom.

For example, according to the American Library Association, the Harry Potter Series by J.K. Rowling is the most challenged book of the 21st century. Although this book series is not taught in the classroom, it is one of the most read among my generation. However, as a regular attendee of a Christian church I was well aware of the controversy surrounding the books. It was magic. Both the books and the popularity of the books.

But some statistics do impact the classroom. For example, the most challenged classic book of all time (American Library Association) is F. Scott Fitzgerald’s The Great Gatsby. I would be hard pressed to find an American high school that did not teach this book.

What does this mean for a reader? In my opinion (as an avid reader) you should look into books that are being challenged. Clearly, there is a reason that people are getting so worked up.

Reading books should be a freedom of choice. There should not be a coalition of parents who come together and say that a book is inappropriate. That should be a personal choice. The decisions made inside a home should not impact the literature that is allowed in school libraries, public libraries, or the classroom.

If you are ever worried about what you are reading for a class, then talk about it. Make an educated statement about how the topics are impacting you. Is the sexuality bothering you? Why? Is the language bothering you? Do you think it is about of context? These points are valid to make in context. As a reader you have a right to make decisions on your own about what the words you are reading mean to you. However, it is also important to understand how others in the literary community feel.

All books were written for a purpose. There is something to learn from every book a writer writes. It is important to look past fear and consider the knowledge available everywhere in the world.