'The Bachelorette' Week 8 & 9 Recap: Baring It All For Love

'The Bachelorette' Week 8 & 9 Recap: Baring It All For Love 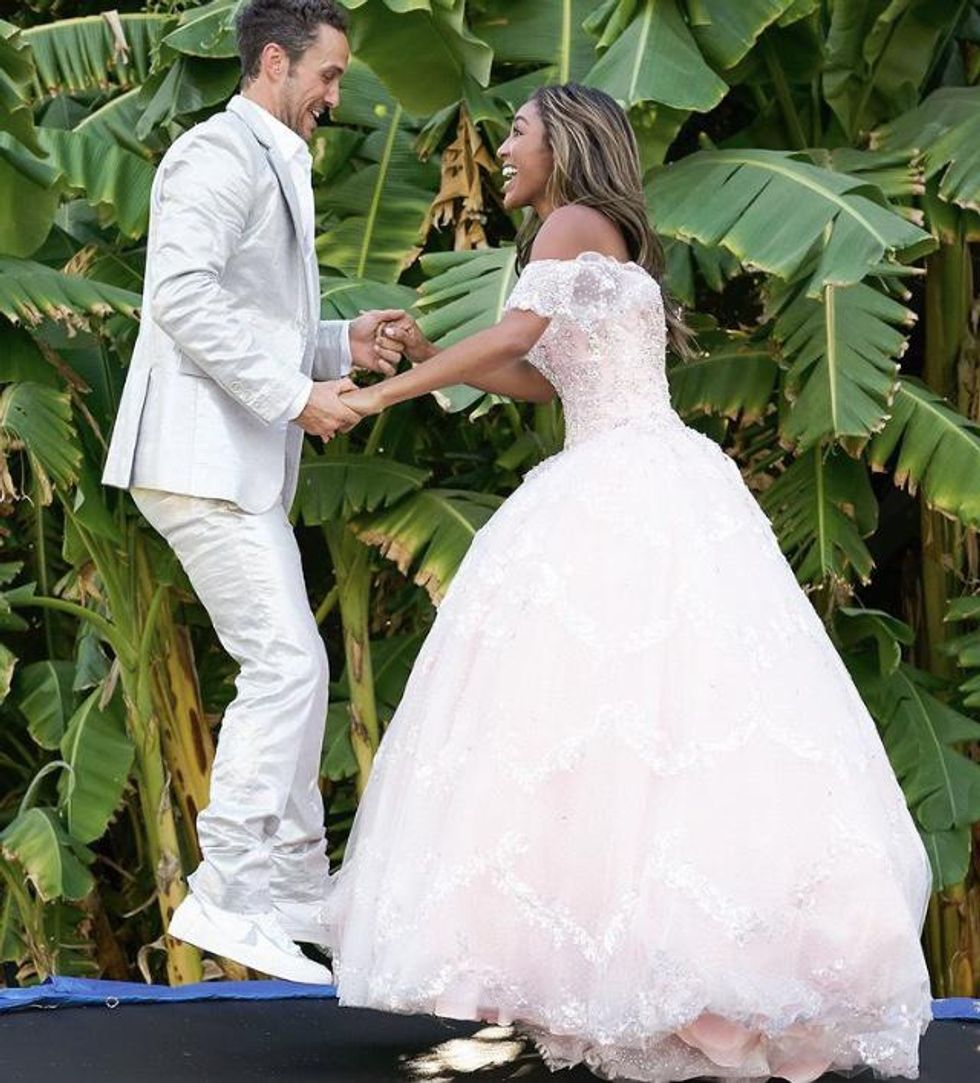 Hey everyone! Wow, it's been a while!

As I'm writing this, this season of 'The Bachelorette' is actually over! But, like the slacker I am, I haven't written my Odyssey articles for the December deadline until now, so if you've been following along and haven't been reading into the spoilers to wait JUST for me, first of all, thank you, and second of all, let's get started!

Jojo Fletcher is here! She's acting as Chris Harrison as he moves his son into college and quarantines the appropriate amount of time because he left the Bachelor bubble (that's what they're calling the La Quinta resort that only contains Tayshia, her contestants, and the crew.) Jojo was my first Bachelorette and first-ever Bachelor franchise season I watched, so she holds a special place in my heart. She won't be here all that long, but it's making me happy to see her around.

Zac gets the first one on one this week! I like him, he seems really sweet. For their date, they dressed up in different kinds of wedding attire and had a photoshoot. I would love this date, it looked so cute and playful, but they were both stressing so hard! It's because Tayshia and Zac both are crushing HARD. After they got more comfortable it went back to being adorable, so that's good. Look forward to more Zac content in these next few articles.

The group date has more art and more nakedness, so much this season! Guess there's not a whole lot you can do in a bubble except bring in more art people. Another pointless manly man argument between Noah and Bennett, I'm getting pretty sick of it honestly. Blake Moynes made a penis out of clay, super interesting (not.) The concept was to reveal yourself through art, and my Ben got COMPLETELY NAKED! He then opened up about his struggles with eating disorders and why that was so hard for him and he got the rose.

Eazy and Tayshia's date was SO funny: it was a haunted tour of the resort! It was hilarious and they laughed very easily together, but it was more of a friendly vibe between them than I date, and I was not surprised when she sent him home.

At the end of the art data, Tayshia called Noah and Bennett on their BS and brought them to a two on one before the rose ceremony. Now we're TALKING, get this unnecessary drama out of here, girl! Bennett brought Noah an insulting present including a book on emotional intelligence! Ouch. Tayshia was not thrilled. But, we didn't get to see how the date ended until Week 9, but lucky for you, I'm about to recap it now!

She sent home Bennett! I think this was the right choice. He kept denying there was any drama when he was clearly the instigator most of the time. She didn't give Noah the rose right away, but he did get one at the rose ceremony, so he lived another week. And this week is important because the next rose ceremony decides who's going to HOMETOWNS!

And who gets the first one on one this week? BEN! I was thrilled. They did a cute little scavenger hunt around the resort. Tayshia was looking for Ben to open up to her, even though he bared his soul last week, and he did; he told Tayshia about his suicide attempts and how his family saved his life. She gives him the rose, and my baby's moving forward. Also, Tayshia said she LOVED Ben in one of her confessionals, which is HUGE.

The group date was a polygraph test. Tayshia was super giggly and playful during her polygraph. It said she was telling the truth when she said her husband is in that room with them. I agree with her, this is the best season of the Bachelor or the Bachelorette that I've EVER seen. It really turned around with the older men and after Clare left. Matt James' season has a literal 21-year-old socialite, so needless to say it's about to go way downhill after this. I'm going to enjoy my recapping while it lasts.

After this group date, she told Zac she was falling in love with him TOO! So big. He's definitely emerging as a clear frontrunner. This was after he admitted to cheating on his polygraph test, but it was on his sixth-grade girlfriend, so no real drama here.

At the end of the episode, BENNETT comes back to Tayshia's room after being sent home and tells her he LOVES her. Not cool, dude, and no one really wants you back anyway, plus this rose ceremony decides who's going to hometowns. Not good stuff.

But you're going to have to wait until the next article to see what happens next (unless you look it up). Head on over there now if it's already up, and if it's not, just you wait, because it only gets better from here. We're in the final stretch!