From Sunset to Sunrise- A Journey to Graduation
Odyssey

From Sunset To Sunrise On The Way To Graduation- Part 1 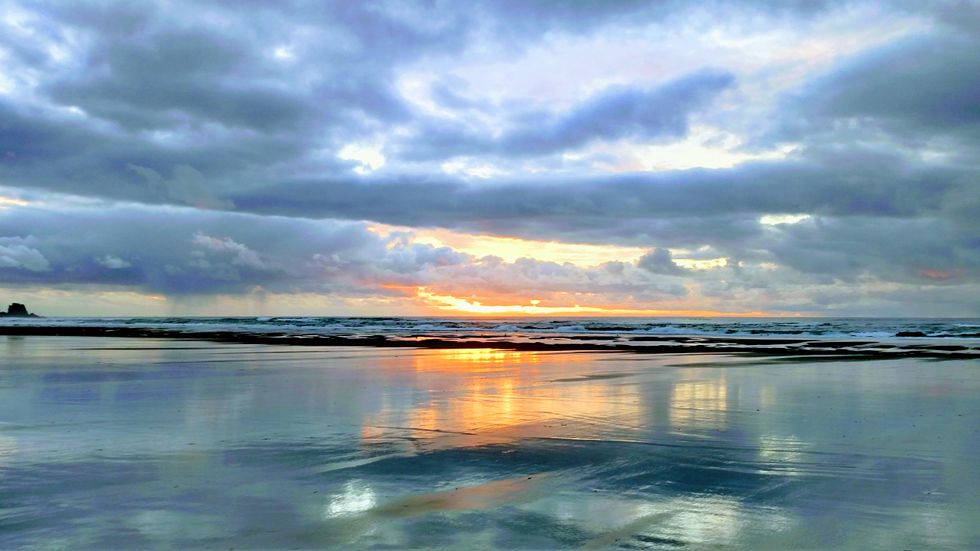 In early 2017, I was processing my second divorce and working out frustrations through my accelerator while traveling first from Olympia, Washington to St. John's Arizona then to Key West, Florida in search of escape and further writing opportunities.

During the time it took me to travel down to Arizona for the divorce hearing and then to Florida to wrap up my employment with a national medical magazine, we visited an abundance of beaches. Torn between searching for that perfect photographic shot and allowing the dogs who spent far too much time in the car to run, the combination of sun and water was irresistible more often than not.

I knew I had to be in Manchester, New Hampshire by mid-May to attend the graduation of my daughter, the first in our family from college. I would also be finally walking for my own Bachelor degree that same weekend...if I could make it to New Hampshire from Washington State. I took the long way.

Leaving the snow behind

When we left Olympia, Washington, on January 11, 2017, it was snowing. Portland was becoming a frozen snowglobe; one that we had no desire to travel through. Instead, we headed out to the coast. It would be a slower route, but it would afford many opportunities for photos on the way down the Oregon Coast.

We watched our first sunset at Oregon's Famous Rockaway Beach

The clouds were magnificent on the coast

It seemed like the perfect beach...I could have stayed forever

We started the next day early, but took time to observe the Pacific Ocean from Driftwood Beach, Oregon

Taken from my friend's porch, it was the perfect place to watch the sunset while the dogs played

We stopped in Brookings, Oregon to visit a friend of mine I hadn't seen since my first wedding. In fact, she had been a bridesmaid! It was great to catch up on the almost three decades we had missed.

Sunrise over the mountains of southern California

As we headed into the mountains, the sun welcomed us towards Arizona. We had no idea it was snowing in the Grand Canyon. Once we heard the report on the radio, we headed towards the park for a minor detour. After all, we were three days early for the divorce hearing.

The Snow Followed us to The Grand Canyon

That big white area above should be filled with the layers of rock that adorn the Grand Canyon. However, on this particular day it was a complete white-out. Not a hole big or little to be seen. Watch out!

A Storm on the Horizon After the Divorce Hearing

The storm was headed right towards us

The radio and internet warned of an impending storm in the White Mountains of Arizona. If we didn't leave within the hour after the divorce hearing, I could get caught in the one-horse-town where my ex and his new live-in resided. That couldn't happen, I put the peddle down and headed for Texas through New Mexico.

I understand the stuffed turkey and deer heads...but who stuffs a coyote?

Throughout our travels, Walmart stores were not only a great place to use the restroom and stock up on important items, but they also provided some incredible entertainment opportunities...like this one in Texas that allowed a local Taxidermist to advertise in the camping and hunting area!

The morning sun made the Mississippi mud glow orange

I love New Orleans, Louisiana. I have often toyed with heading there for a writing sabbatical. The spirits that reside there entrance and toy with me. Every time I am close, I just have to stop and walk along the riverside.

Making it to the Atlantic Ocean

On January 28th, we got to Florida around 3 am. St. Augustine's beach was full of shells in the daybreak. The dogs ran and I gathered scattered souvenirs.

Heading for the Keys

The Overseas Highway through Marathon, Florida was full of sights

After stopping for a quick visit with the widower of one of my dearest friends in Central Florida, I headed for the Keys to cry into the sun.

Key West captures the mysteries of many minds

I had made it to the furthest point from my home, while remaining in the USA. It was the second time I had driven to Key West. I pondered how long to stay. I didn't have to be in New Hampshire until May, and it was only early February.

At the Key West AIDS Memorial

...and I chased the sun around the tiny island....

I'll take a time out here in Key West... and wait for next week to see how long it takes me to leave! See you next week for part 2!