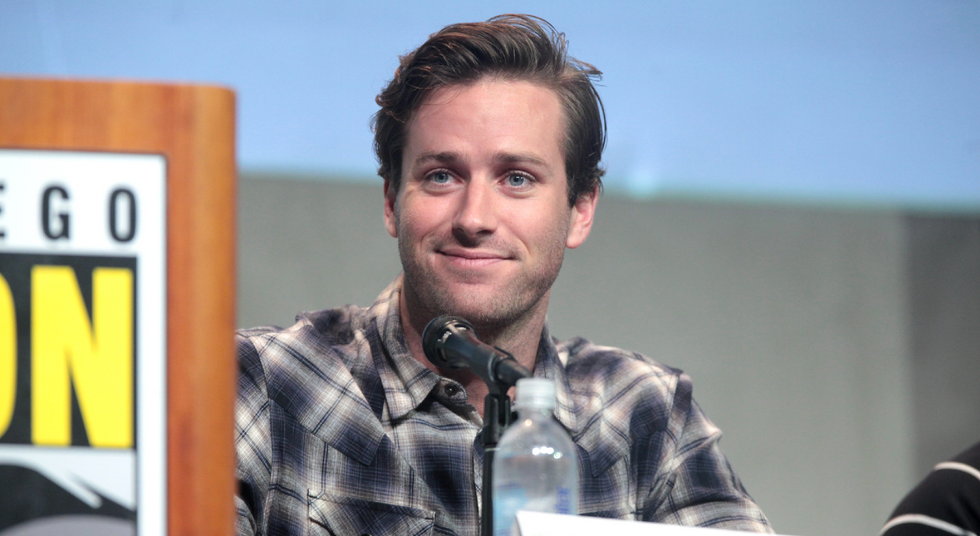 Armie Hammer's name has been floating around the internet recently. Several screenshots of alleged direct messages were leaked by an anonymous user on Instagram. According to the user, these were screenshots of explicit sexual conversations with Hammer. They detailed various fantasies that were very extreme. The portions of the messages everyone is focusing on is when Hammer allegedly described rape and cannibalism fantasies.

Hammer has denied these screenshots are real. He has since dropped out of an upcoming romantic comedy with Jennifer Lopez, stating this isn't the right time for him to film a movie. More alleged screenshots were posted, where it appears the Instagram user admits they were fake. However, the user has since denied this and said their admission wasn't real.

Hammer's ex-girlfriend, Courtney Vucekovich, has spoken out since the alleged screenshots were posted. She claimed not to know if the messages were real, but said Hammer's sexual interests were in line with the messages. Vucekovich also claimed that Hammer was emotionally abusive and pained him as manipulative. She said the breakup was difficult to recover from and that she suffered PTSD from the relationship.

It's unclear as to whether Vucekovich is telling the truth or just capitalizing on a big story. What is clear, however, is that she is not accusing him of committing any crimes. The abuse she describes sounds like nothing more than a bad, toxic relationship. That doesn't mean these experiences didn't seriously affect her if true. But it doesn't make Armie Hammer a rapist or a criminal.

It's also worth noting that the alleged messages don't show any nonconsensual behavior either. Hammer hasn't been accused of sending these messages unsolicited. It sounds like nothing more than two consenting adults "sexting" or talking dirty. It sounds like things you say in the heat of the moment. In fact, there's even leaked audio of what sounds like Armie Hammer confirming just that. If this is just fantasy and nothing more, the collective outrage amounts to no more than kink-shaming.

People have sexual fantasies for very specific reasons. If you go to a sex therapist, you will find there is a root to your sexual thoughts, behaviors, and attractions. It doesn't matter how vanilla or kinky you are. A person's fantasy life is also very different from their reality. Just because someone has a particular fantasy, it doesn't mean they will act out said fantasy in real life.

Maybe someone went through a traumatic event in their past and their sexual fantasies are their only outlet. They shouldn't be judged for such fantasies, because that is invading their only way of working through their issues. Therefore, they might feel whatever permission and safety they had in their sexual realm is now taken away from them. Such unwelcome comments might make their situation worse.

When you read about the Armie Hammer story or listen to the way it's being talked about, it sounds like the public is treating this as another #MeToo story. Vucekovich's story has been picked up by several outlets, almost all of which use her quote about Hammer wanting to "barbeque and eat" her in the headline. In classic clickbait fashion, these sites make Hammer look like an actual cannibal. They completely ignore the context of dirty talk and sexual fantasy.

Even Hammer's own ex, Jessica Ciencin Henriquez, said in a tweet, "If you are still questioning whether or not those Armie Hammer DMs are real (and they are) maybe you should start questioning why we live in a culture willing to give abusers the benefit of the doubt instead of victims."

This doesn't seem like a fair way to approach this story. There is no "victim" or "abuser" in those direct messages. Equating consensual roleplay with sexual assault is so dangerous. It's disrespectful to actual victims of such crimes. This is how the general public starts laughing off actual allegations. This is what leads to victims not wanting to come forward, fearing they won't be taken seriously. In order for rape to be taken seriously, we must be clear on what it is and what it isn't.

Based on what we currently know, it looks like Hammer is a target due to being a heterosexual man in Hollywood. There are no doubt, actual men, in Hollywood grossly abusing their power. However, the outrage culture has given birth to a zone where anybody can capitalize on it to push a story. Look at what happened to Aziz Ansari. A woman who went on nothing more than a bad date with the actor told a detailed account of the evening, unfairly painting him as some perverted predator.

We need to think for ourselves and not blindly fall for an angle being pushed on us. It's so easy to fall into that trap with social media, but it's wrong. We also need to rid our society of its prudish nature. It's unhealthy, not only to adults who aren't hurting anybody but to actual victims of sex crimes. If we want to have a culture where victims can feel comfortable coming forward, conflating their experiences with consensual acts isn't helping.