Anxiety As Told By Someone With Anxiety
Odyssey

It's time to get weird with it... wait, does that sound dumb? 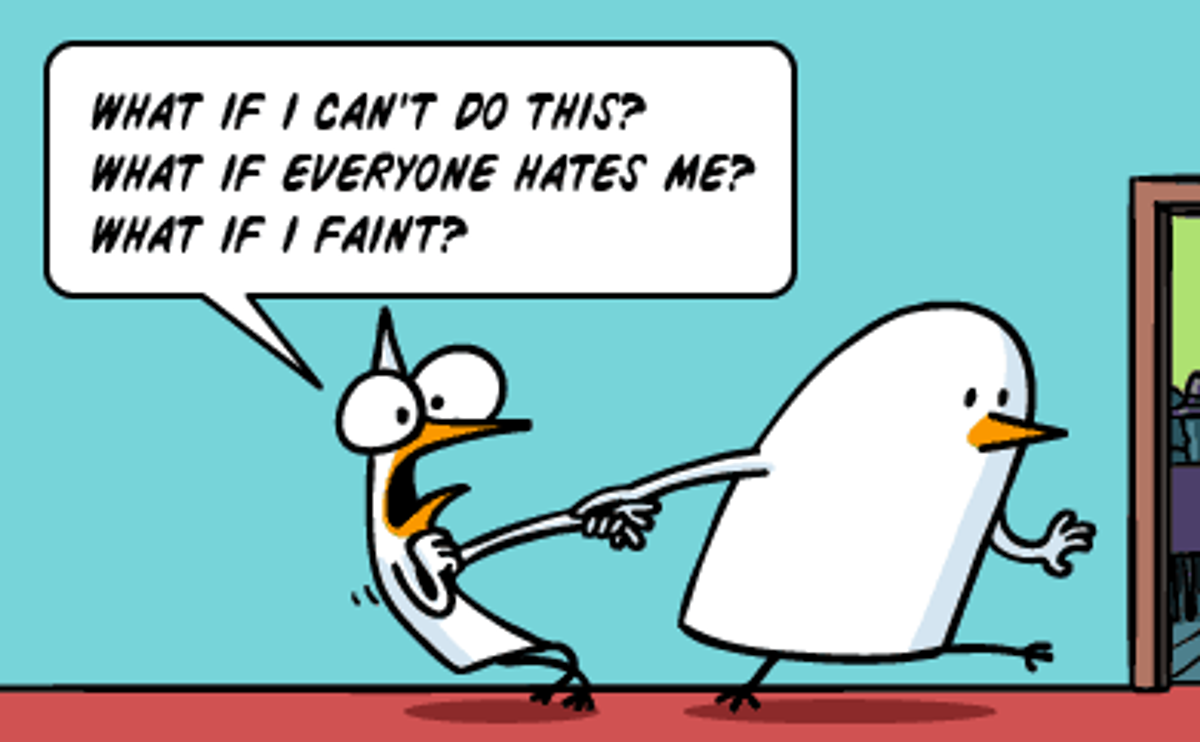 Anxiety sucks. Really, there’s no other way of putting it. I often hear about people getting anxious about having to make an important phone call, or send an email, or do a little public speaking. But there’s more to it – for me, there are a lot of other, very specific, very mundane things that cause my heart to race. Honestly, even I know these things are totally insignificant, but that doesn’t make me feel any better about them… although it is kind of funny, in a convoluted sort of way.

First of all: Throwing trash out. Putting something in a trashcan in my room is no big thing, but it’s when I have time to think about what I’m doing that throws my mind into turmoil. My way to the trash bin outside, black garbage bag in hand, leaves my mind littered with questions: What if I accidentally threw out something important? Or I change my mind about something I did throw out? I’m never going to see any of this stuff again… it’s going straight to a landfill, and oh god, how much am I destroying the planet? Is it worth it? And I know I’m just throwing the trash out, and it should be a simple process, but… am I doing it right?

“Am I doing it right?” is a question that invades my head way more than it should be allowed to, and it’s even worse for the simple things because it comes with the added guilt of “I should know if I’m doing this right.”

Take laundry, for example. Put your clothes in the washer, dump some detergent on top, set the machine to the only setting I’ve ever used (regular warm/cold), and, I mean, that’s it. I’ve done it a thousand times before, but I have to leave the room immediately after starting the cycle, lest I think about my clothes getting wet and oh god what if I messed it up somehow and my clothes are never going to dry for some reason and I’m never going to wear my favorite shirt again or for that matter any of my clothes and there’s no way I can afford an entirely new wardrobe and maybe I should just not do laundry ever—

On the subject of indoor plumbing – well, don’t even get me started on flushing toilets. This one actually has a tragic backstory: when I was five years old (or something) I accidentally flushed my favorite pink gel pen down the toilet, and it’s left me paranoid ever since. Listen… apparently this is weird, but I habitually look in the bowl before “dismissing the oval office,” so to speak. And immediately after flushing, I check my body for my valuables (phone and keys) in the rare case that they teleported out of my zipped up pockets and into the toilet. I mean, it’s not very likely, but it could happen, you know?

Oh, names. I avoid saying people’s names for as long as possible for fear of mispronouncing it or having the wrong one altogether. This even goes for names like Sue and John. If you have a name, there’s a good chance I won’t say it, at least not on my own accord. What if I annunciate the wrong syllable or just botch it completely? I overthought this so much that once when trying to say the name “Martin” I panicked and said it with a “d” – “Mardin.” Mardin? Really?

Something I give myself a pass on is my absolute fear of driving. Even though I white-knuckled my way through the test, I somehow ended up passing and getting my license, but I haven’t been behind the wheel since. Look: I know you only get good at driving from practice, but I’m not really interested in “practice” when it involves being in control of a two ton hunk of metal surrounded by other two ton hunks of metal that I definitely am not in control of. I know driving makes some people feel powerful, but it makes me feel like a god in the sense that I am suddenly in control of who lives and who dies and if I’m being real that is something I am super not interested in being responsible for, do you feel me?

So I avoid being a driver of a car like the plague, but cars still affect my pedestrian life. I flip-flop between being overly cautious about crosswalks to bolting across them, even when cars would clearly not be able to hit me if they tried. And when cars honk their horns around me, oh boy, you can bet I break out in a cold sweat trying to list off every law I’m breaking, because if a car honks around me it must be about me, right?

There’s more, of course, like how I used to exclusively get salad and pizza in the dining hall because those were the only obvious self serve areas, or how when I leave the house I have to look and feel my pants six times to be sure I am, in fact, wearing pants, or how I’ve never ordered delivery for myself because what do I do when the person is at the door it’s not that simple.

I’ll level with you. It’s pretty funny (even I think it’s funny sometimes), but it’s not fun. I wish I could just chill out about doing laundry and crossing the street and flushing the dang toilet. I cannot do so many things people say are “easy” because I find them mentally and physically taxing, and on top of all that it’s just so tiring. It’s the constant feeling that everyone is in on a joke except for you, even when there’s no one else around.

But there are positives. It’s not a requirement for me to be comfortable before doing something, because I’m rarely comfortable, and sometimes things just need to get done. I know how to take care of myself when I’m stressed, or I’m at least getting better at it. And honestly, I think because of this I value self care more than a lot of other people. I know when to take breaks and when to just keep going.