An Interview With The Figure Of A New "Aera"
Odyssey

An Interview With The Figure Of A New "Aera"

The Viiison behind Aera Brand. 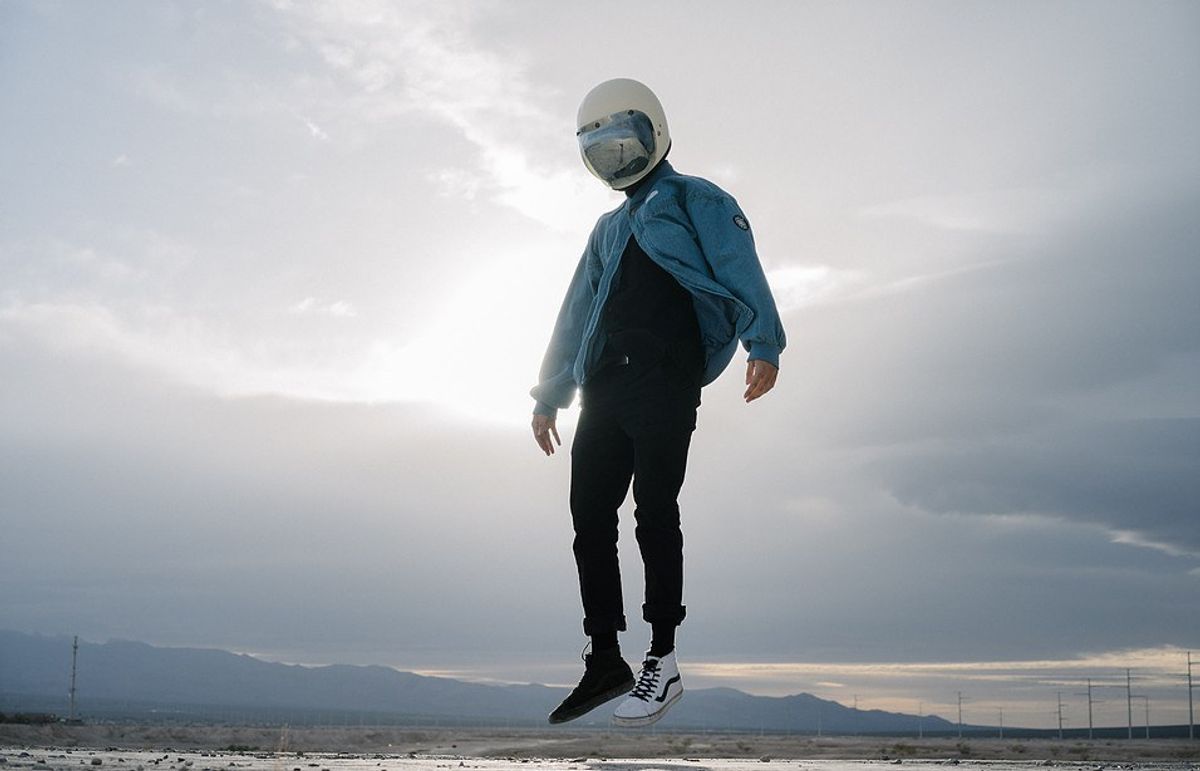 V, Viii, or Viiision is a man of mystery - and he prefers it that way. A man that says he is 13.82 billion years old, captures only faceless self-portraits, and appears to simultaneously remain everywhere and nowhere. He’s the face, or rather lack of, the Aera brand revolution which celebrated its one-year anniversary on March 8th, a day Viii believes should be recognized as a national holiday. With an ambiguous motto advertising “CLAIM YOURS,” Aera is a clothing brand like no other as it is more of movement with a following on the verge of creating a culture.

I first met Viii briefly at the First Friday event downtown last November where he was selling his handmade, exclusive designs from a Rubbermaid tub. Since then I’ve witnessed firsthand his revolution grow into our revolution. With the rise in spread of Aera brand propaganda including graffiti, photos, and short videos, worldwide, people are appreciating Aera. Viii and Aera have fans throughout Germany, England, Switzerland, and Japan. “I haven’t been to any of these countries myself, but I am eternally grateful that a piece of Aera is out there. It's almost as if I'm traveling the world from the comfort of my freezing cold garage,” Viii laughs. I can confidently contest to the fact that never have I met anyone as dedicated to their dream and their big picture idea as Viiision. His entire character is so completely consumed by his dedication to detail, he himself is Aera.

“Anybody can make t-shirts, but building a brand, an identity, that takes time; lots of mental breakdowns in parking lots and overdraft fees.” Simply put, the process to starting a brand, starting anything, is by doing! There are already an excess of ideas out there, it’s those who can follow through that find success. Aera is something Viii very visibly believes in, that kind of devotion is enticing. Something about the anonymous proves intimately inviting while remaining publically personal. The website, creative direction, advertisements, the clothes Viii singlehandedly designs every aspect of Aera, with some sewing help from mom; he even ships the clothes and runs all the social media, including his Twitter that is riddled with simple intransitive messages linked specifically to the movement; all accomplished from a spare bedroom and the garage.

Inspiration for his distinctive style comes from mostly songs, movies, historical happenings and their time periods; most recently medieval and renaissance paintings serve as a muse. While he has great respect for many other designers, he doesn’t necessarily draw ideas from theirs, rather crafts pieces exclusive to Aera alone, “I want to create things that people have never seen before.” Viii expresses.

Incredible thought has gone into each piece of clothing, each film, photo, art piece, and even the name. Viii explained his uniquely detailed thought process of forming a name he had intentions for being creatively common, “a household name, we hear the word "era" all the time.” The spelling was changed to make the word symmetrical, an A at the beginning to match the A at the end. Capitalized, the two As look similar to arrows pointing upwards. Lowercased, the "a" and the "e" connects into one character, "æ," which in old English is called an “ash.” Decoded, the meaning behind “Aera” is to rise from the ashes. This notion of ascending, rising above is one of Aera’s core ideals.

Aera has two distinct logos; Viii created the first, titled the "Coup de Grace," French translation meaning “Blow of Mercy,” during what he recalled “a very dark time” in his life. It shows a balloon tied to the weight restraining it from drifting away. Viii refers to this as, “the final blow you give someone to end their suffering - a mercy killing.” This image also serves as symbolism for freedom and duality. If the string is cut, the balloon would elevate, it would be set completely free, but until then it must carry the weight heavier than itself. The two components of the image represent coexistence as well; the weight can’t weigh anything down without the balloon and the balloon can’t tug if there’s nothing to pull from. An idea so central to Viii, he has this symbol tattooed on his left forearm. More recently, he developed a new logo for Aera that depicts two hands joined together in prayer entangled in chains. He calls it “The Martyr” which by definition is someone who voluntarily suffers death as penalty for refusing to renounce faith or cause. Viii announced plans of tattooing this on his right forearm.

So what does this mystery man do when he’s not fulfilling his roles as the sole administration of an enterprise? He satisfies his day job as a film director and writer. “I do gigs here and there,” he says. His work has taken him across the country and provided collaborations with distinguished names, including Skrillex. At the moment most his attention is focused on music videos and creative directions, his latest collaboration with friend Trickster Guru can be seen on VEVO. The project also features sounds by AWAY, with his debut EP releasing later this year, an artist Viii says to stay on the lookout for. Viii shares he’s very selective with who he works with, “I'm working with musicians who I truly believe in and they believe in me. Everything must be cohesive. I like to think of the films I do as little galaxies that all live within the same universe.”

While he takes his share of criticism, Viii does it all and continues to do it to inspire. He’s said before, “it’s all so much pressure sometimes,” and knowing not everybody will understand, Viii continues to dedicate everything to Aera - our Aera. A business card with nothing but “Viiision” printed on it and the scent of dead roses is Viii. A picture strategically hiding nothing but the face is Viii; Viii - the self-described “American refugee.” His message in not just his work but his devotion to it proves to be nothing short of inspiring. “Eras come and go. Aera will be the only era that lasts forever. CLAIM Y[OURS].”