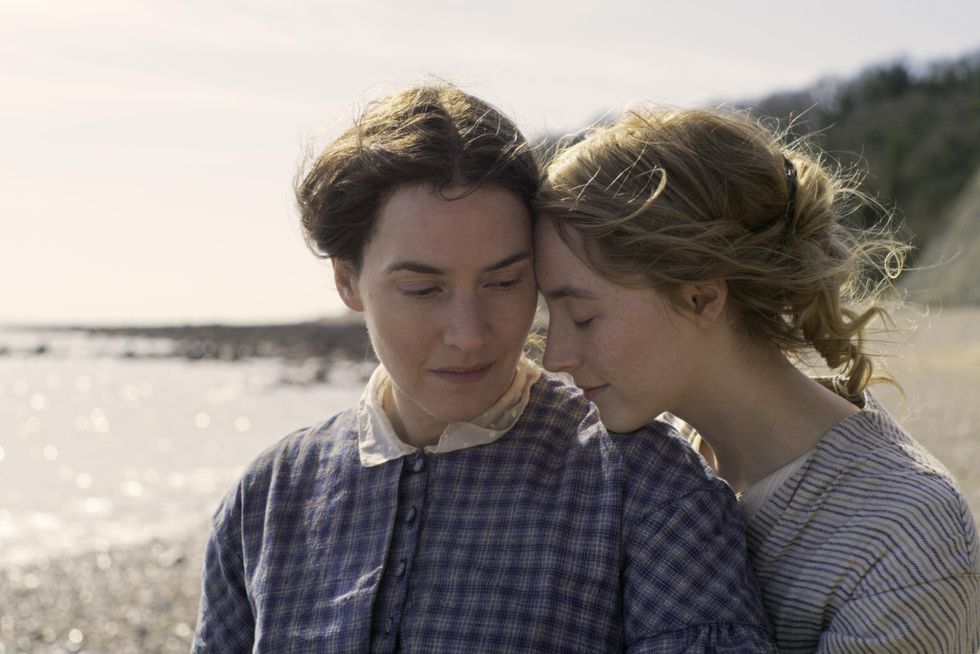 Saoirse Ronan continues to experience early success in her acting career that's similar to Kate Winslet's experience at her age.

So it's no wonder that cinephiles and fans of the actors are looking forward to both women starring as the romantic leads in director Francis Lee's "Ammonite."

The film follows a partially true story about Mary Anning, an English fossil collector, dealer, and paleontologist who made early discoveries in Jurassic marine fossils found along the shores of Lyme Regis in Southwest England.

Though the film could benefit from focusing more on Anning's career, it's a beautiful interpretation of the relationship between Anning and her historical friend Charlotte Murchison thanks to Winslet and Ronan.

In the film during the 1840s, acclaimed but overlooked paleontologist Mary Anning (Winslet) is reduced to selling small marine fossils to tourists with her biggest discoveries behind her. It's tedious work digging muddy fossils and cleaning them to their true shapes and patterns, but she needs the money to support her and her ailing mother (Gemma Jones). One day a geologist named Roderick Murchison (James McArdle) asks to leave his wife Charlotte (Ronan) with Anning as an apprentice, thinking that the sea salt air might combat Charlotte's depression. Mary enjoys working alone, but she can't afford to turn down the large payment Roderick offers in exchange for leaving Charlotte in her care.

Charlotte doesn't seem interested in the fossils, and she and Mary don't get along at first. But they develop an intense romantic relationship that changes their lives.

Despite the dreary backdrop of a cloudy English shore, this film shines from Kate Winslet and Saoirse Ronan's quiet acting.

There isn't a lot of dialogue in the movie, leaving the actors to physically express the characters' love, pain and joy through longing gazes and small moments. Both women are experts with portraying powerful female characters, but it's nice to see Ronan in a more reserved role compared to her fiery Jo March in "Little Women" or Lady Bird McPherson in "Lady Bird."

Though the acting was extremely good, it would've been nice to see more on Mary's career. The first scene of "Ammonite" wonderfully misleads viewers into thinking the film is about how Mary's discoveries are overlooked by men. But nothing much is said on her overlooked career other than in passing comments or fleeting scenes. Instead, the film deeply focuses on a fictional romantic relationship.

The score composed by Volker Bertelmann and Dustin O'Halloran is mesmerizing with the violins, and it captures the intense mood in this love affair. Plus, the cinematography manages to capture a bleak location with beauty.

When the Oscars announce their nominees for 2021, it wouldn't be a surprise if "Ammonite" received recognition for Winslet, Ronan and the film's score.