A quick short story to embody the warmth of Autumn. 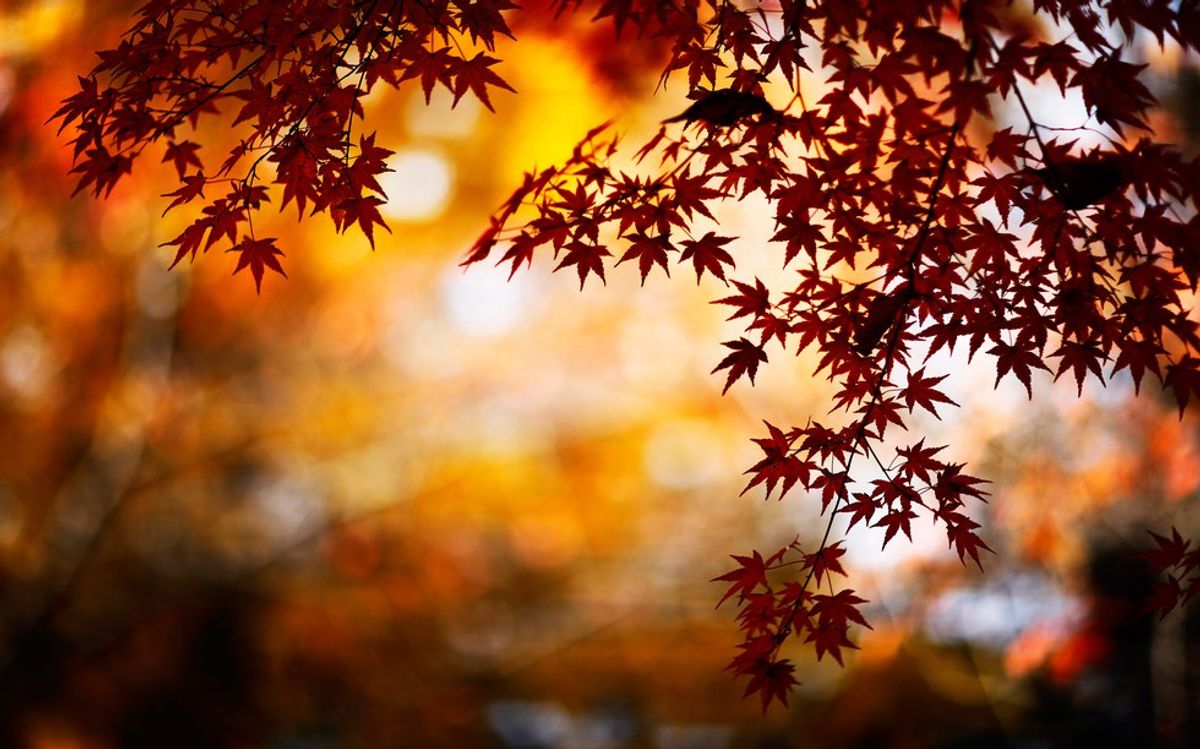 There's an unspoken pleasure in walking upon shriveled leaves, a sweet sense of warmth when you hear them crackle beneath your weight. Kids do it publicly, letting the world know that it's their tiny feet stomping on the withered brown clusters along sidewalks. Age makes us hesitant, though, and eventually one reaches a point where they try to quietly reach out to the crumpled chips and crush them without breaking one's stride.

When I was contemplating this, I was stepping on each leaf as if the pavement might burn me. My street was old and desolate, it's rims littered with bricked mahogany bungalows and rotted lawns. What was once crisp black road was now washed and deformed, sliced down the middle like it was bent in half.

I was alone. The air was crisp, biting at my nose and turning my ivory skin to pink, yet the rest of my body was safely covered in deep blue jeans and an over-sized chocolate sweater. The maroon scarf wrapped around my neck was hand-made by my grandmother, and it still smelled of the cinnamon that breathes from the depths of her kitchen.

My estrangement didn't last very long. From one of the small homes emerged two young boys, bolting out the side door and breaking the tender silence with the moan of metal hinges and their fresh orange laughter.

"Amber!" said the eldest, waving his hand fervidly in the air.

Chuckling, I returned the greeting by moving only my fingers, smiling. "Hi, Jamison."

Mikey, Jamison's younger brother, quickly gave a similar greeting, and I did the same and passed him a soft smile.

"How was school?" I asked, as they both wandered up closer. Jamison was starting his first year of middle school this year, and Mikey was only in third grade, so the both of them were small and excitable. Jamison was rowdy, his crazy curls stuck up in random places and dark eyes lit with a youthful flame. Mikey, however, focused his excitability on distractions--once he and Jamison walked over to me, Mikey suddenly wandered off and started jumping on fallen leaves.

"It was alright." said Jamison. "There's this girl in my class who keeps bragging about how she's going to Europe during Thanksgiving break."

"What are you gonna do?"

"Same. I might end up visiting my Aunt Tracy upstate for a few days, but that's it."

Grinning, I took my hand and shook up Jamison's wild brown locks, their rough texture stirring life in my frozen hands. "Sure she is."

And just like that, the two boys sprinted towards their home, and the earth fell silent once again. I saw their mother step out, smiling and waving her hand as the boys ducked into the furnaced indoors. I remembered when I first met the Fernandez family, when Mikey hadn't been born and Jamison was only about two years old. That was around the time my family moved here from San Fransisco. I was almost six then, and my older sister was eleven. After the divorce, she ended up staying with our mother in California, while I went with my father to the Big Apple.

I couldn't say I missed California that much. Things were different over there: the grass was always emerald green, the sun always brilliant gold, and the beaches a crisp and clear blue. Nothing was subtle there, at least not like it was in my new neighborhood.

One thing I could say, though, was that I missed my sister. She was always a friend to me, even though I would tug on her pig tails and bite her fingers. We still met up every so often, but recently she had moved in with her boyfriend in L.A, and we hadn't spoken much since then.

I breathed in the cold air and let it sting my lungs, like I was swallowing freshly frozen ice cubes down a sore throat. The colder weather had a strange way of making me feel warmer than I did in California. Comforted. This was why I often lingered when making my way home from school, why I would make turns and loiter down empty streets to extend my time in the brisk air so that, once I was finally inside, I could peel off layers and snuggle up with tea or hot chocolate.

When my own home rose into view, I sighed. Much like the bungalows that lined either side of the road, our house was made of weathered and worn brick, it's once luscious red now dulled and coated with soot. Unlike the other homes, the leaves on our lawn had not been raked, and simply veiled the bronze grass with broken slivers of the great oak tree that stood between the road and the sidewalk. Much like the rest of the neighborhood, this tree was big and old, slumped over to curtain our tiny brick structure with jagged and crooked branches.

Suddenly, a glimmer of sunlight poured through the gray clouds, hazed by the oncoming puff of black smoke that rose from our chimney. It's light was tranquil, just hot enough to melt away the numbness in my nose and cast a yellow glaze over my strawberry blond hair. After giving myself a moment or so to bake away the last chill, I bounced onto the sidewalk and smashed clusters of leaves beneath my feet, heading straight for the familiar red door behind which the comfort of a crackling fire awaited me.