There was a lot of good last year. 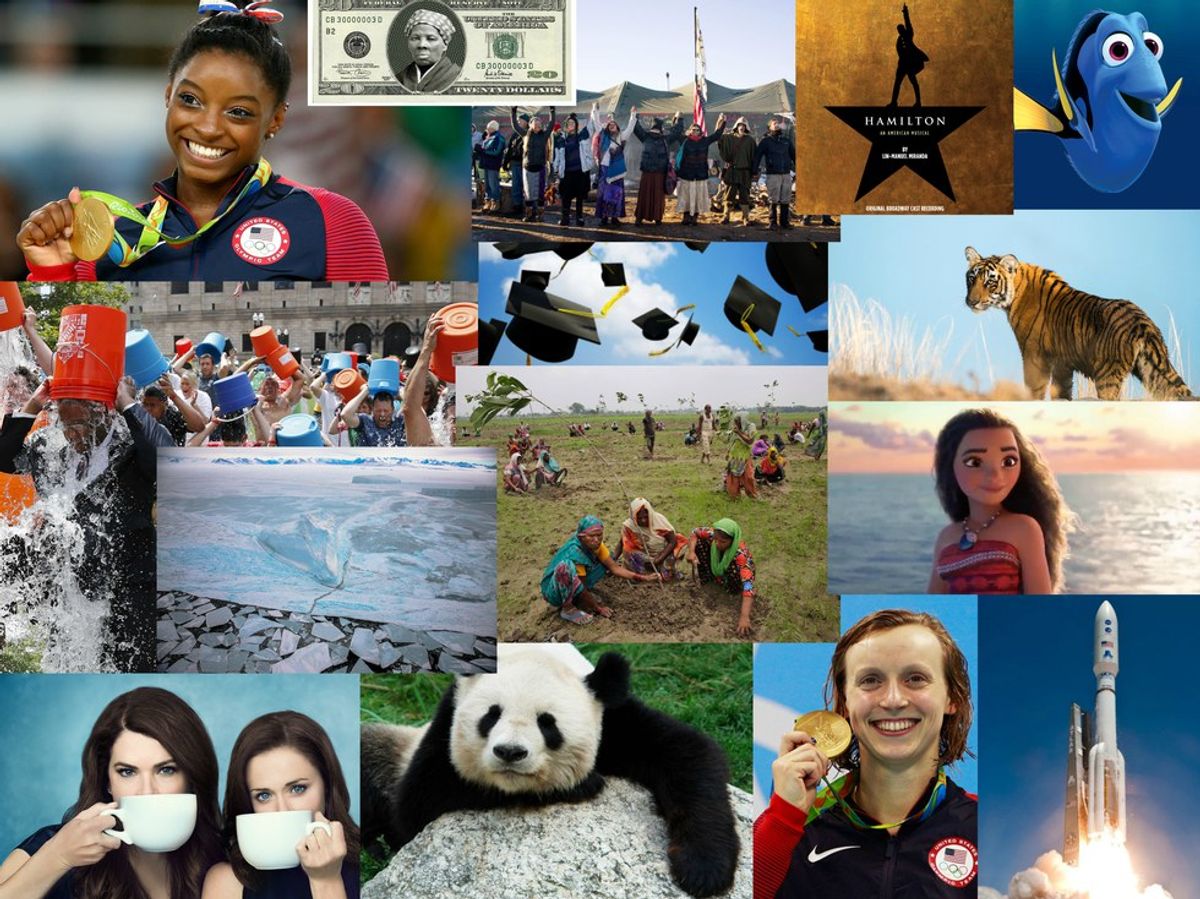 2016 was not perfect, and for some, it was devastating. With that being said, let’s not forget about all of the amazing things that happened over the course of one crazy year, be them feats in the entertainment industry, triumphs of humans protecting nature, athletic achievements, scientific discoveries, and more. These things should be celebrated, not dismissed as we excitedly enter 2017.

The Department of the Army announced that the oil pipeline would not be built under Lake Oahe on the Missouri River. The close proximity of the proposed pipeline to the Standing Rock Sioux Tribe’s reservation threatened to pollute their drinking water. Point one for humanity!

2. Harriet Tubman will appear on the $20 bill

Harriet Tubman was a determined hero and abolitionist, aiding the escape of hundreds of slaves via the Underground Railroad. Now she will be recognized for her bravery by replacing Andrew Jackson as the new face of the $20 bill. This will make her the first African American, and the first woman in over a century, to be on a bill.

This marks the highest percentage of students earning their diplomas ever and shows a drastic increase since 1999, when only 71% earned their diplomas. I’d say that’s something to smile about!

4. The world tiger population is growing

For the first time in 100 years, the world tiger population is increasing. Currently, there are approximately 3,890 tigers in the wild! (Up from 3,200 only six years ago!)

The 2016 Olympics in Rio proved to be truly golden. Outstanding USA competitors won 46 gold medals overall! Two of the exceptional medalists being only 19 years old. Simone Biles was one of them, a gymnast who managed to take home three gold medals of her own, plus one bronze, and who led her team (the Final Five) to gold as well. Katie Ledecky was the other, winning four gold medals for swimming. Guys and gals alike seriously rocked the Olympics this year!

The population is divided into three categories: those who have seen Hamilton and are obsessed with it, those who have not seen Hamilton, but are still obsessed with it, and those who think they don’t want to see Hamilton, but really, on some deep level, are craving a taste of the Broadway sensation. Deservedly so, Hamilton was awarded 11 Tony Awards, and the mixtape came out this year, too! All I need in 2017 are tickets to Hamilton...that would be enough.

The World Health Organization proclaimed the elimination of the measles in the Americas in September. The organization also revealed that with vaccination, “3.2 million measles cases will have been prevented in the Region [Latin America and the Caribbean] and 16,000 deaths between 2000 and 2020.”

8. Giant pandas and manatees are no longer endangered

The International Union for Conservation of Nature has moved the giant panda from endangered to vulnerable, and the manatee from endangered to threatened. Though they are both still at risk of becoming endangered again, this shows progress for the two adorable animals.

9. The world’s largest marine reserve was established near Antarctica

The European Union, along with 24 countries (making up the Commission for the Conservation of Antarctic Marine Living Resources), agreed to set aside 600,000 square miles of the Ross Sea, bordering Antarctica. This will now be the world’s largest marine reserve!

10. The planting of 50 million trees in one day

In India, over 800,000 volunteers from Uttar Pradesh planted 50 million trees in solely one day. This massive feat was accomplished in order to honor the agreement India made at the Paris Climate Conference in 2015: to spend $6 billion to reforest 12% of their land.

11. ‘Moana’ redefining what it means to be a Disney princess

Moana is a new kind of Disney princess, more accurately described as a heroine who has no love interest guiding her quest. She is independent and saves her island by means of her own strength and intelligence. She is also the first Polynesian princess, hopefully showing young, darker-skinned girls, that don’t always see princesses on TV that look like them, that they can do anything they set their minds to.

If you grew up watching Finding Nemo, the prospect of a sequel focusing on the silly, forgetful, lovable Dory was exciting beyond belief. It’s for the kids of the 90s and those of today, a heartwarming movie that may cause the shedding of a few tears and can bring together the two generations.

Whether you enjoyed the revival or not, this was a huge deal in the world of entertainment! Gilmore Girls fanatics were ecstatic for their beloved show to return about a decade later. Amazingly enough, all of the main characters and basically all of the minor characters returned. How they managed to pull that off, I will never know. Perhaps more to come? Where they lead, we will follow.

After five years, NASA’s spacecraft, Juno, entered Jupiter’s orbit. This occurred on July 4th, adding a little extra special something to Independence Day! Juno will “investigate the existence of a solid planetary core, map Jupiter's intense magnetic field, measure the amount of water and ammonia in the deep atmosphere, and observe the planet's auroras.”

Research—funded by the money raised from the ALS Ice Bucket Challenge—has identified an ALS gene, NEK1, which can help in developing new therapy techniques. The study that discovered this gene involved more than 80 researchers from 11 different countries! Teamwork at its finest!

This thrilling, thought-provoking, oftentimes creepy Netflix series blew my mind. It is incredible in every possible way. Thank you, 2016, for blessing the world with this show.

See, 2016 had an abundance of good in it (plus more that wasn't listed here), and in 2017 we can increase the amount of good exponentially if we all spend every day adding positivity to the world. Happy New Year!

Madison Franz
The Narrative
1119695
Photo by Brooke Cagle on Unsplash

Madison Franz
The Narrative
655333
Photo by Manny Moreno on Unsplash