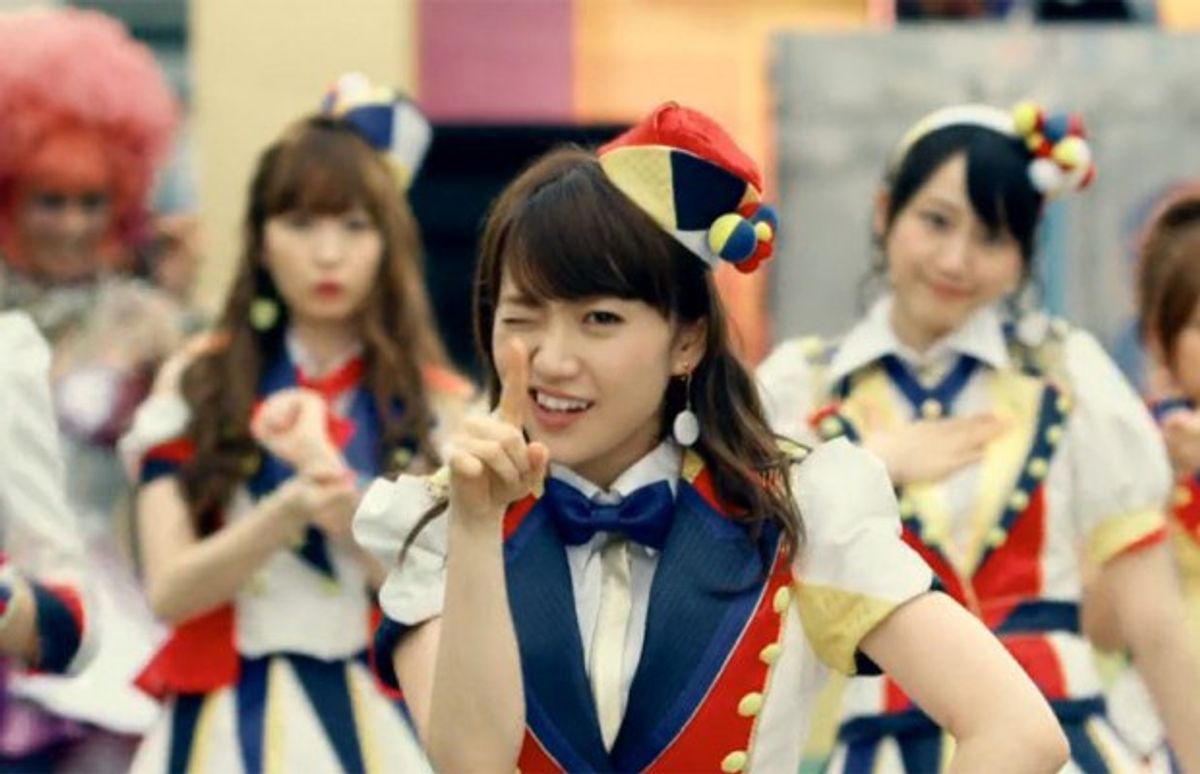 When Youtube RED, Google's new paid membership wing of the online video player, rolled out in the U.S. in October, regular viewers in the United States lost access to a host of Japanese produced music content, including official videos.

But after a closer look at this 120+ troupe of singing schoolgirls, you may find that losing AKB48 in the USA isn't such a big loss...

1. ABK48 girls are the ultimate sex symbol in Japan, but they look, and are, really really young.

AKB's most popular music video, Heavy Rotation, a pop anthem revolving around an underwear-clad pillow fight, featured girls as young as 14. Heavy Rotation's music video, which you can no longer watch on Youtube in the U.S, has topped 124 million views.

This is Yasuhiro Akimoto, AKB's lyricist and producer. To get a glimpse into this guy's head, watch this incredibly awkward CNN interview from 2012 when the reporter asks him about AKB48's target audience...

3. Because the secret behind AKB48's success is a hardcore fanbase of middle-aged Japanese men.

Seriously, this picture was actually taken at a AKB48 concert.

Vice took this on by actually going to the heart of Tokyo's young female idol district and unearthing the more sinister nature of these fans.

4. Which is made a lot worse when you find out that Japan has the worst track record of women's rights in the developed world.

Japan was ranked 101st in the world for gender equality last year, tying with Swaziland, that place where the King picks a new wife from a parade of topless virgins every year.

Women in Japan can still get fired from their jobs for becoming pregnant, and it took Japan 25 years longer than the United States to pass anything resembling a sexual harassment law.

5. Public molestation of women in Japan has become such a problem that Tokyo and Osaka now have women-only subway cars.

The women's-only cars were introduced after the Tokyo Metropolitan Police conducted a poll which revealed that two thirds of female commuters in Tokyo had been groped on the subway, the majority on a regular basis.

6. But, those same cities are also home to hundreds of high priced molestation bars...

8. The AKB48 girls don't have it much better, they're not even allowed to date.

This AKB48 member shaved her head in shame after paparazzis photographed her leaving her boyfriend's house.

9. But a brave few in the Japanese music industry have publicly recognized AKB48 for what it really is...

... until you realize that you can still watch the horde of spin-off groups that have followed in its footsteps...

If any of this really pisses you off, don't get too excited about the 2020 Tokyo Olympics. AKB's producer Yasuhiro Akimoto was named to the Olympic Committee last year, and one of his first proposals was to feature AKB48 in the opening ceremony.