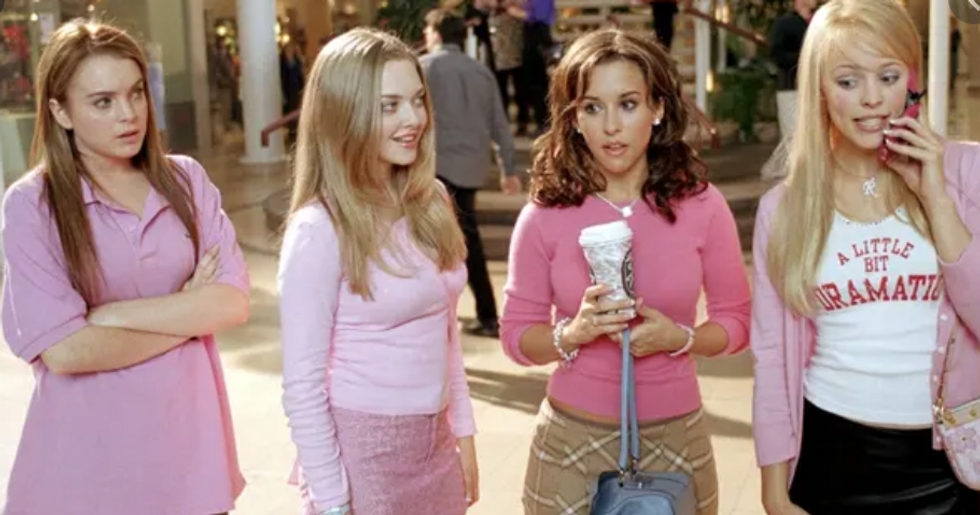 Personally, I had seen the beginning part of "Mean Girls," but never the whole movie. I was happy to finally get the opportunity to watch it!

Here are 78 thoughts I had while doing so. Some are completely random, but watching something for the first time means fresh thoughts, right? Right.

I didn’t expect Cady’s parents to be in the intro like that. Why did that happen?

Why did Cady walk like that while a bus was passing by?

Gee, how bold of that girl to say that she’d kick Cady’s arse if she talked to her again.

A teacher taking their clothes off in front of the class—isn’t that a violation of rules?

How interesting that actors in their 20s play teenagers in movies. I don’t know if they would blend in like typical high school students though.

Had to insert this iconic line in while at it.

The ignorance over Africa is comedic, but omg.

The way that other students are gagging over her… I’m chuckling inside.

Regina really giving Cady a seat at the table? Nice!

Oh how I wish that Regina would treat me like that. She might have, but she wouldn’t have invited me over to her table like that.

Karen being dumb about Africa and not knowing that there are white people in African countries like South Africa and Namibia.

I can relate to Cady in terms of fitting in and not feeling like I have anybody. I often feel like I don’t have any friends, even though I actually do. Still, that’s a longer story.

The Plastics are so superficial, especially about wearing jeans and not wanting to lose their status at the lunch table.

I wouldn’t have fit in with any of them, because I’m not about dating and getting a guy

Why on Earth are they fighting near a fountain?

LOL at Regina portraying herself as Susan.

I remember seeing that little girl trying to belly dance when I saw a small segment of "Mean Girls."

Not the dog biting on Regina's mom's nipples and she doesn’t even know it.

Cady being stuck in a dilemma, but especially with her circumstances, could you blame her?

Why does that young man look like he got an old man's beard?

How many things consist of a “social suicide”?

Imagine being like Regina and obsessing on superficial things. That would mess up my mental health.

The Plastics dressing up and posing for pictures on Halloween sums up how social media users are.

Cady is doing great disguising herself.

Regina is being a snake to Cady already.

Regina reminds me of a serial liar and Cady is already feeling the effects of snake behavior.

Janis warned her about Regina and was right all along.

Oooof at the hypothetical Regina attack.

Regina so fixated on boys and being cool it’s not even funny.

Although high school is not like this in real life, I would’ve never fit in with the kind of environment it is.

Look at Regina faking a compliment to a girl, and Cady stay having a different personality among her friends.

Too bad that Gretchen forgot about Regina.

Those guys really tried to rap.

Oh my, I finally see the original segment for what Ariana Grande used in her “thank u, next” music video. How great!

Is Gretchen alright? She looks like she’s reaching her breaking point.

That classic line of, “Stop trying to make fetch happen. It’s not going to happen.”

LOL, what a poor robber. That didn’t even make any sense.

Does Regina have body image issues?

Everyone around the school talks about Regina, but they don’t seem to care about her aside from superficial stuff.

Cady was left behind after falling into the trash can, and no one cared to help her.

Regina is crying like the spoiled brat that she is.

I never liked the prom king/queen elections due to them being based on shallow popularity than anything else.

Everyone in Africa knows Swedish? Is Cady really that smart then?

Yep. Cady trying to keep up with The Plastics is really ruining her grades.

Why is that young girl looking at inappropriate things on television?

The gossip looks like it’s too much to handle over the phone.

Regina is concerned about carbs while having carbs all over her tray. She’s no smarter than Karen.

Gretchen is the real hero by booting Regina from the table. We have no choice but to stan!

Things are starting to go downhill at the party. What’s the tea?

Now why would Cady try to get bad grades to receive help from a guy? What a shame!

“You act like everybody loves you, when in reality, everybody hates you!” Classic!

I thought Regina had missing teeth, but look at her being a whiny brat again.

Not Regina dragging herself. I thought she was dragging Cady with her burn book page.

That guy is such a poor sex-ed teacher. He can't even spell chlamydia right.

The principal is really pretending to care about Regina so much.

OMG at the brawl being started by pages.

What is the principal doing with a bat? As if he was going to hit somebody with it.

TMI alert for that girl talking about her intimate issues.

The pettiness of the cliques both inside and out.

Everyone has been victimized by Regina George. I’m hollering at that!

Cady just needs to say something to stop the madness already.

The fake and rehearsed apologies are laughable.

A couple more iconic lines, especially “She doesn’t even go here.” and that world peace-ish "bake a cake" line.

They really let Gretchen fall on top of Karen… LOL.

Cracking up at Regina being struck by a bus. I did not see that coming, but whew.

Cady back to having lunch in a bathroom stall...again.

Why is that teacher so mean? Does she have a problem or something?

Looks like Gretchen either has Invisalign or an Essix retainer. Probably the latter.

I could never answer those kinds of math problems, and math used to be my best subject.

Cady really helped the school take the W through a trigonometry problem. Queen!

Cady, GET TO THE TRUTH! SPILL THE TEA ON REGINA!

Not a crown being broken to be given to other students. I thought Cady was going to spill on Regina writing that Burn Book.

I’m so mad that the truth on the Burn Book wasn’t spilled. But hey, at least Regina got the karma she deserved.

Karen would not make a good reporter, much less a meteorologist.

New plastics in the school while Regina has fallen from the top of the caste.

I was enjoying the movie as a whole until the tea on the Burn Book wasn't spilled. That said, Regina did get some karma. Better than nothing, right? See when you do clownery, the clown comes back to bite.