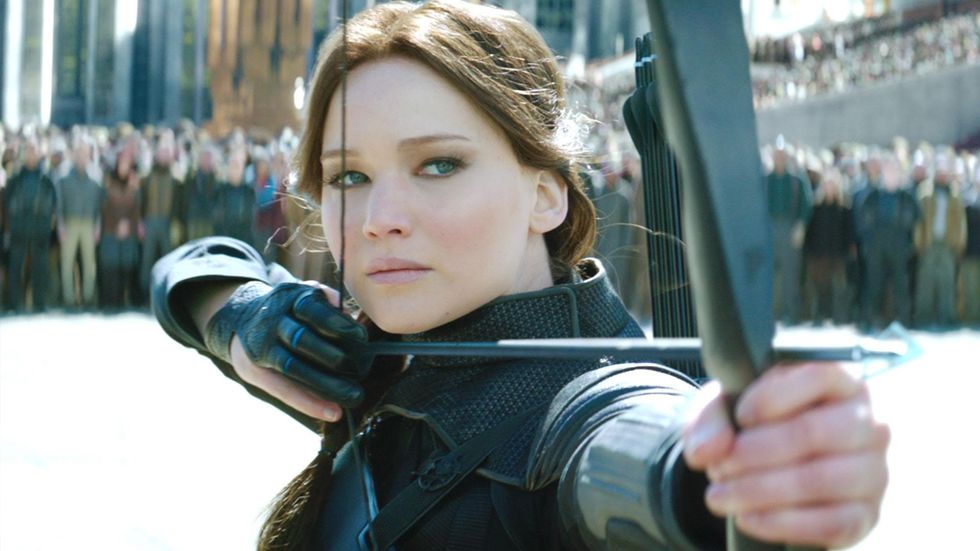 I think that a large part of destigmatizing mental illness and mental health care is to show the public that people with psychological disorders are often indistinguishable from anyone else and that people who struggle with these things aren't inherently violent.

We still have a long ways to go, especially in terms of how mental health professionals are portrayed in the media, but these series are a testament to the fact that we are becoming more inclusive and more accurate in our storytelling.

Katniss Everdeen was only 16 years old when she volunteered in her sister's place for the Hunger Games. Over the course of the 18 days she spends in the Games, she has to watch 22 other children be murdered while fending for her life and trying to protect her allies. To make it worse, she is brought back for the Games the next year and made to play again. Katniss suffers a lot because of her trauma, developing post-traumatic stress disorder (PTSD) that manifests in flashbacks to the games and violent night terrors.

Other victors, winners of previous games, similarly struggle with the consequences of taking part in such violence. Haymitch, Katniss' mentor, is a raging alcoholic; Johanna, an ally to Katniss' cause, is dependent on morphine and suffers from the same flashbacks and nightmares. The trauma of the Hunger Games is clear, but what makes this series special is how they dealt with it.

No character is ever told to "just get over it", no character is minimized or ostracized because of their illness. Katniss has to work hard at being able to trust people again and her problems aren't simply erased with time like so many other movies. The last scene of the final movie shows her planted in an idyllic life, married with children, finally at peace, and she still feels the effects of what she went through all those years ago.

Instead of saying that her problems just went away, they chose to show how people with these struggles will always remember what happened to them, but they are still able to go on and lead happy lives, not unscathed but certainly not broken.

Jessica Jones is a new heroine from the DC franchise with pretty amazing powers. The first season centers around her in the aftermath of escaping from another powered man named Kilgrave. Kilgrave has powers of mental manipulation, being able to make anyone do anything with nothing more than his voice, taking a liking to Jessica's dark side and her strength.

He holds her captive for months, making her do unspeakable things to meet his own ends. When she finally escapes, Jessica struggles with PTSD and flashbacks to her time in captivity, practicing naming the streets near where she grew up to center herself. She has to remind herself where she is, that she is safe, that he can't get to her anymore.

She builds up her walls to protect herself as well as turning to the bottle to numb her memories. Jessica rekindles her relationship with her sister as well, showing the heartwarming arch of her trying to reconnect without opening herself up to be hurt again.

She goes on to use her powers to help marginalized people not represented by the main sect of society, which I think was a beautiful spin on what she went through and how it made her realize all that was wrong in the world.

Although this show is laugh-out-loud funny and ostensibly innocent, it deals with issues of trauma and PTSD as well as the long road to recovery. Kimmy was kidnapped and held in a bunker for 15 years by a delusional Reverend, and when she finally gets out she has a lot of catching up to do.

As she learns about how the world has changed, she begins to have nightmares and flashbacks, as well as being triggered by Velcro and men with beards. Kimmy finally realizes she needs help when she has a dissociative fugue and ends up on a roller coaster in another state.

What is truly significant about the show and what makes it so unique, however, is how they portray therapy and recovery. It takes several sessions for Kimmy to have any kind of breakthrough and her therapist constantly reminds her that it is hard work but it will be worth it.

Kimmy is unfailingly kind, stubbornly optimistic, and refreshingly happy for a character with mental illness. I really liked how they chose to differentiate themselves from the stereotypical portrayal of PTSD and instead wrote a super funny show that dealt with mental illness masterfully.

"Fleabag" centers around the title character struggling to cope after the death of her friend. She jumps from partner to partner trying to feel validated and loved, constantly denies how much she is struggling and has flashbacks about the events leading up to her friend's death and whether or not it was her fault.

"Fleabag" was an unflinching look as grief and guilt, at times being too raw to watch. She struggles to open up about her feelings and grief, looking for anyone or anything to distract her. Whenever a loved one dies, it is always our first instinct to wonder what we could have done to prevent it, but this is magnified ten-fold by Fleabag and the guilt is a huge obstacle for her.

This show handled the incredibly sensitive period immediately following death with humor and grace, never dismissing the feelings of Fleabag or painting her as weak for being vulnerable.

Zendaya's Rue Bennett was probably the most accurate depiction of teen mental illness I've ever seen. She struggles with addiction, depression, anxiety, and bipolar. "Euphoria" shows how addiction is rarely caused by just one thing, and how mental illness will often push a person towards numbing or distracting themself.

On the first day of school, Rue meets Jules; Jules is vibrant, accepting, and optimistic. She and Rue quickly become inseparable, the yin to each other's yang, but the issue comes in when Rue begins to be co-dependent with Jules. Rue relies on her for security and happiness and worries constantly that Jules is withdrawing or thinks she is a burden.

After an extreme manic episode, Rue becomes catatonically depressed and lays in her bed unmoving for days. I remember crying when I watched this episode because of how familiar it felt to me, how I could recall times in my life I had felt the same way. It can be hard for people without mental illness to understand how and why things like this happen, but seeing another person my age on screen talking about their struggles with depression felt profoundly personal and like I wasn't alone.

One of the funniest moments of the whole season is when Rue herself Googles "Do bipolar people know they're bipolar?", quickly realizing they usually don't. This shows the confusion and lack of answers given to people with mental illness in an endearing, relatable way, highlighting the importance of professional help.