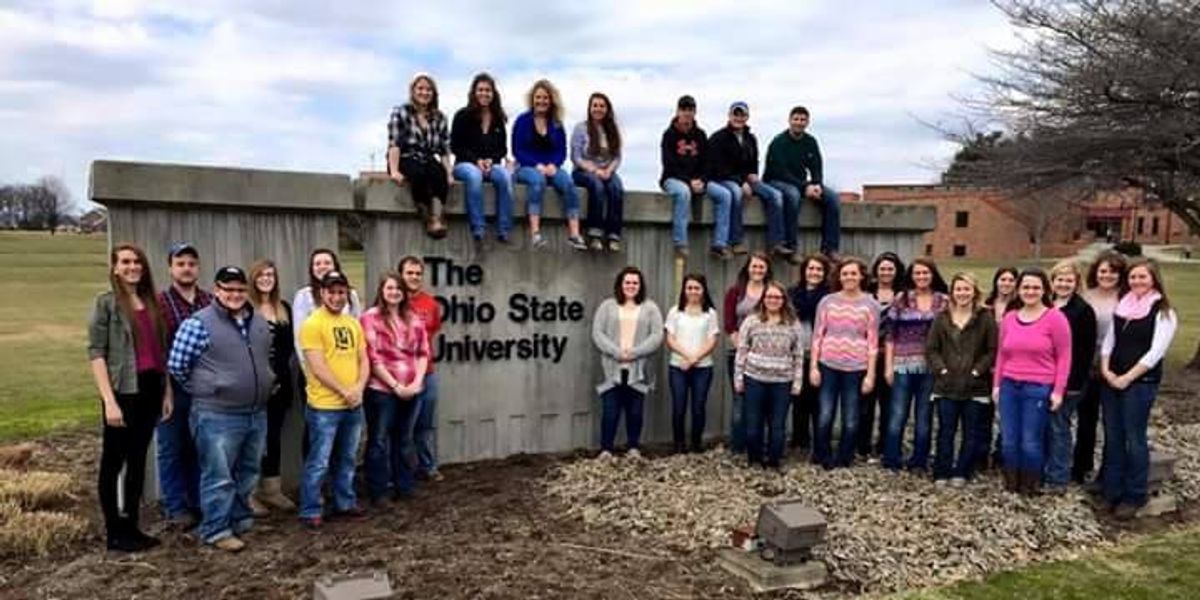 My senior year of high school was filled with the same questions everyone else in my graduating class was being asked: "So what are you doing after you graduate?" "Where are you going to college?" "What's your major?"

For me the answer was something I was proud of: I'd be going to Ohio State University, majoring in Agricultural Communications. The first time I told that to someone other than my parents or my FFA adviser I heard the joke, "Oh, so you're gonna learn to talk to cows and corn?" That was just one of the many crazy and offbeat things I heard once I told people what I was studying in college. Here's a list of some of the most common misconceptions I've heard about college agricultural majors.

1. We're all going to school to be farmers.

I don't think I could even count on both hands the number of times I told someone I was studying an agricultural major just to have them respond, "So you're gonna be a farmer, right?" While yes, farming is a huge part of agriculture, that's not all there is to the industry. Agriculture is also business, marketing, public relations, law, sciences, politics, policies, and so much more. With majors in the field ranging from Agricultural Education to Renewable Resources to Food Science to Greenhouse Management to Agribusiness to Environmental Sciences, the future career options for AG majors are truly endless.

This idea generally stems from the previous thought that AG majors are just going to college to get a degree in farming. Yes, there are plenty of students who study an agricultural major and then do return back home to the family farm or end up starting their own operation. No, they aren't wasting their time. Oftentimes, studying things such as Agronomy, Livestock Science, Crop Management, or Agricultural Systems, the lessons these students learn will only help them be more successful farmers or agriculturalists.

3. Everyone grew up on farm.

No one hears "Agriculture major" and thinks some kid from the suburbs. The fact is there are lots of students in the field who have never stepped foot on a farm before. My freshman year of college, I met my best friend Natalia, an AG major from outside of Cleveland who probably never would have seen the cab of a tractor had I not taken her home from school with me one weekend during hay season. These students might not be studying the traditional Agricultural majors everyone thinks about like Livestock Science, they could be studying Floral Designs or Landscaping. Or they could be Pre-Vet with a large livestock specialization—where a person's from really doesn't matter; what matters is their passion.

4. We're all a bunch of cornbread hillbillies.

If you asked most people to describe what they see when they think of someone who studies agriculture, it would probably look something like faded blue jeans, old boots, and some sort of button up flannel shirt. Oh, don't forget the lip packed with chewing tobacco and the beat up pickup truck. Bonus points for the people who think we all spend our free time yelling, "Yee-Yee!" and hitting on our cousin Betty Jo. These are probably the same people who think we all grew up on farms or are going to farm school.

5. We aren't smart enough to study anything else.

There's an unspoken stigma that people not involved in the industry often assume AG majors simply aren't smart and that our majors are easy. I'll never forget having a high school teacher of mine asking me, "Why don't you look into taking a real major?" just weeks before graduation. Like any other student, AG majors have to study and work to keep up with their classes and make good grades. I invite anyone who thinks Agricultural majors are easy to spend a week taking our classes and then see what they have to say.

People not involved in the industry may have some pretty off-the-wall misconceptions about what it's like to study agriculture in college. But those of us that live it and breath it know the truth. And most importantly, we know that our passion for the American agriculture industry will only grow as we continue our educations.