Joe Biden Gaffes That Will Make You Say 'OK, Boomer'

5 Joe Biden Moments That Will Make You Say 'OK, Boomer'

Obama might have been a great president, but that doesn't mean his VP will measure up. 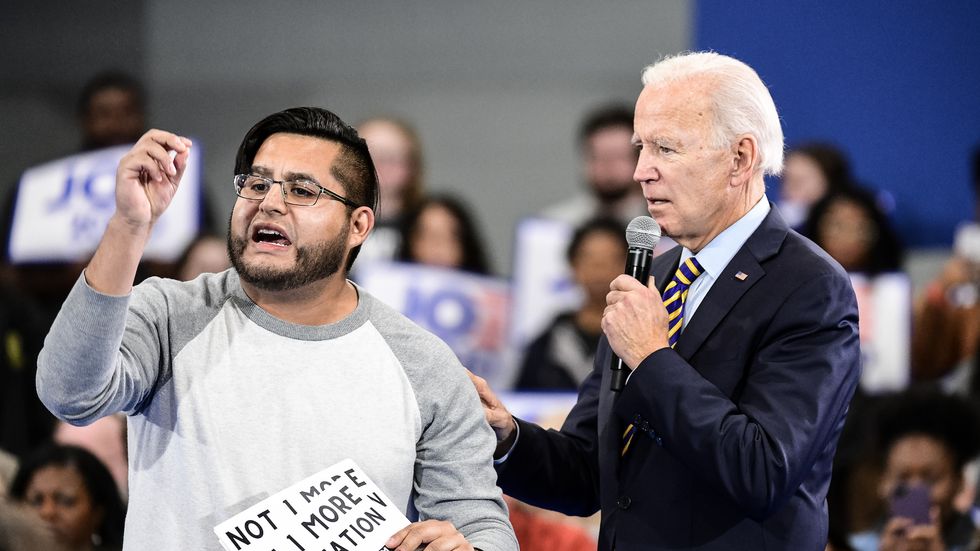 Joe Biden is the "safe bet" for baby boomer Democrats but many people in the younger generations just cannot understand why. Younger voters tend to opt to support more progressive candidates like Bernie Sanders, Elizabeth Warren, and even Andrew Yang. For example, Yang's young, loyal supporters call themselves the "Yang Gang," a term I've seen on buttons and hats all over campus. I'm not denying that Biden has done great things for this country. He has helped shape progressive policies from the Global Climate Protection Act to taking on the NRA. As Obama's vice president, he was a large advocate of the Affordable Care Act (Obamacare) and the Equality Act.

He was great as Obama's VP, but maybe it should stay that way. Here are 5 Joe Biden moments that will make you say "OK, boomer."

1. He still thinks marijuana is a "gateway drug"

At a recent town hall meeting in Las Vegas, Biden said,"The truth of the matter is, there's not nearly been enough evidence that has been acquired as to whether or not it is a gateway drug," sounds like someone is trying to appease the older generations.

His demographic of voters tends to be more conservative when it comes to legalization recreational marijuana. Regardless of the "gateway drug" excuse, (because that's what it is, an excuse) legalizing marijuana would make actually it less accessible to minors. Who do you trust to ask a customer for their ID, a legal store or a drug dealer? The truth is drug dealers don't care about your age, their bottom line is to get money. Dispensaries would be required to ask for identification, thus allowing adult users of marijuana to be the only purchasers.

In fact, I believe legalization would actually have the opposite effect of the old-school "gateway drug" excuse. If someone purchases marijuana from the street, the dealer may offer them more addictive (and dangerous) substances that a dispensary won't. Legalization would not force marijuana users to be involved with sketchy street dealings and users will be less likely to use other drugs, simply because they are not for sale at dispensaries.

The "gateway drug" excuse is a tactic that has been used to scare people away from legalization of recreational marijuana. His stance may also be influenced by lobbyist donor, John Bentivoglio, a partner at Skadden Arps and former top Biden staffer on the Senate Judiciary Committee, he is registered to lobby for Strongbridge Biopharma on drug pricing issues. In other words, he has PAC contributions from a pharmaceutical company, the main competitors of the marijuana industry.

"Go to Joe 30330." If you haven't seen this video from the democratic debate, it's a must-see, probably the most entertaining moment of the whole debate. Most of his competitors told their supporters to go to their website, but Biden had something else in mind. While he did mean to say "text," I can just imagine the confusion from the boomers trying to figure out how they can "go" to Joe30330. In addition, someone hilariously stole the website domain, "joe30330.com," where those looking to donate were encouraged to support Pete Buttigieg (genius).

3. Is he pro-choice, pro-life, or pro-whatever-gets-him-the-most-votes?

Biden is pretty uncertain on his stance on abortion, and it's becoming confusing to voters. It seems that Biden is in conflict with his Catholic upbringing and has difficulties with the separation of church and state, like many baby boomers in politics. Biden has supported the Hyde Amendment for decades but has recently denounced the amendment.

Although he no longer officially supports the amendment, the negative effect it had still stands. According to the New York Times, "[The Hyde Amendment] bans federal funding of abortion, with exceptions for rape, incest and the life of the mother, and it affects Medicaid funding of abortion, leading critics to argue that the measure puts a disproportionate burden on poor women and women of color." With the nation being threatened by anti-abortion laws in more some states, women's rights are being threatened.

The last thing we need in office is a man with old school values who switches his position so frequently.

Students react as they realize that Biden has no concern for the problems of the younger generation.

In the wake of the tragic mass shootings, Biden referenced the tragic events in Houston and Michigan. The shootings happened in El Paso, Texas and Dayton, Ohio. We get it, mistakes happen and everyone overlooks certain things, but this is not something a person should forget. The parents of these children are grieving and this event should not be forgotten. If you're going to speak in front of a huge group of donors, you should know the location of the tragedies.

Biden running for president was an unexpected result of the Trump presidency, and I respect his initiative to step up during this time. Biden is more of a moderate candidate compared to his Democrat competitors, which makes him more electable than the extremely progressive candidates, such as Sanders and Warren. If you are looking for a candidate with more moderate views, I would suggest paying attention to Pete Buttigieg. He is a younger candidate with fresh ideas and the ability to relate to millennials but also won't insist on "Medicare for all," but he believes in Medicare for all who want it.

Regardless of your political opinion, make sure you hit the ballot box in 2020! Voting is a civil right that baby boomers are taking advantage of, and so should you!