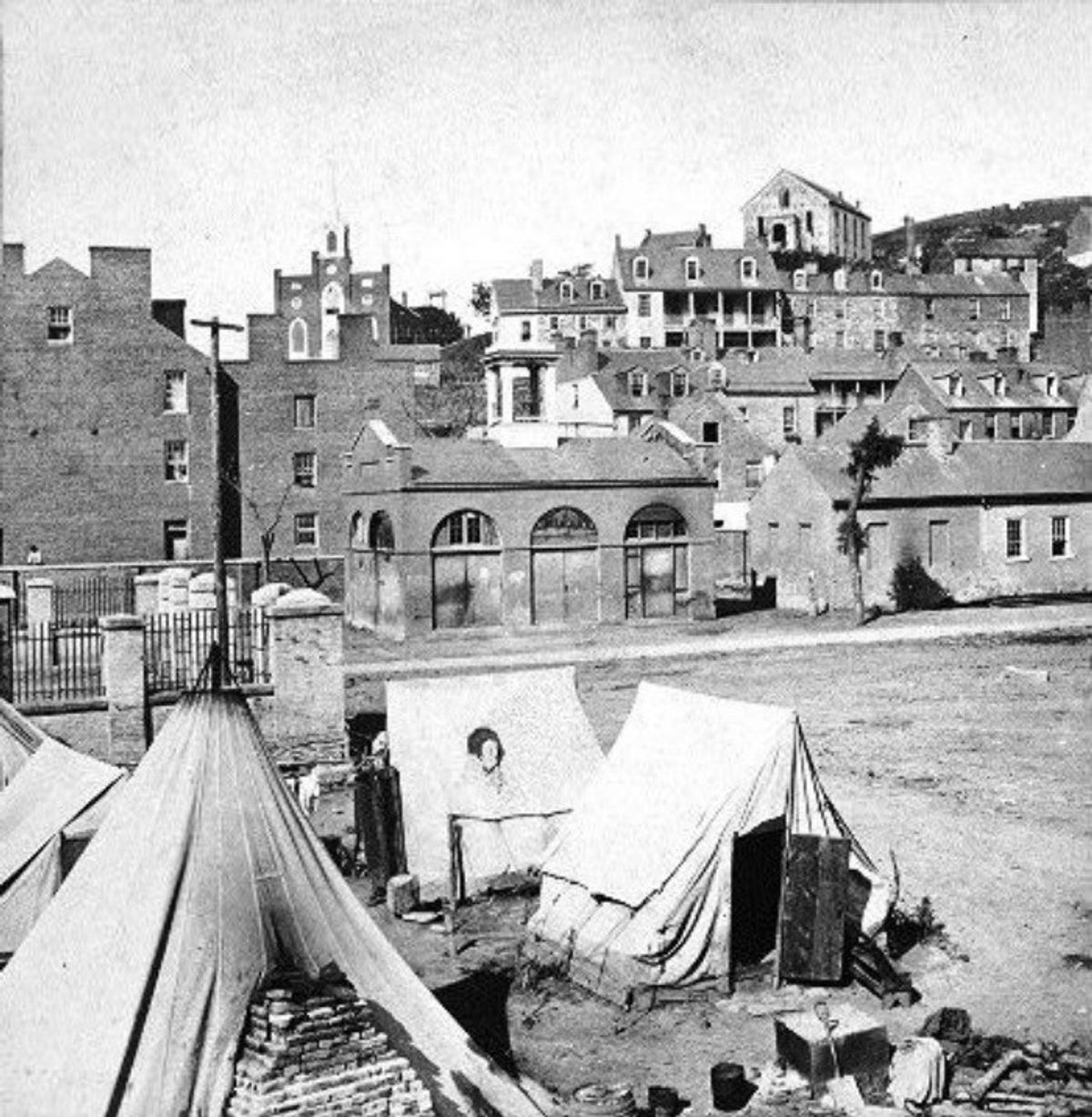 Even before the Emancipation Proclamation, slaves could escape slavery within the lines of the U.S. Army, but they were not exactly free, as was discovered by Charles Stewart, a slave in Harpers Ferry. Charles, along with a slave named John Sorrell, were the property of Captain Robert Baylor, a Confederate under Turner Ashby. In the early months of 1862, United States and Confederate troops were looking at each other across the Potomac, with U.S. troops on Maryland Heights and Confederates within Harpers Ferry. On February 7, 1862, Captain Baylor had John wave a white flag, at gunpoint, to grab the attention of U.S. soldiers across the river, while he posted snipers in the buildings along the Virginia shore. George Rohr and a man by the name of Rice saw John and began to row across the river, believing that he may be seeking his freedom. When Rohr and Rice were close enough the Confederate snipers opened fire killing Rohr and wounding Rice. John Geary, the commander of the U.S. troops across the river ordered the buildings that the snipers occupied, which were considered downtown Harpers Ferry, burned. Charles and John would be moved to Winchester with Captain Baylor. While in Winchester, Charles and John attempted to escape, John was shot and killed by Baylor while Charles escaped. Charles immediately ran to Harpers Ferry, knowing that U.S. troops meant freedom from slavery. When he reached Harpers Ferry and was about to cross the river into Maryland, Charles was stopped by U.S. troops. They ordered him to the contraband camp, which was ironically in the shadow of the Engine House, where John Brown was captured and the war to end slavery began.

The United States Army may have been a symbol for the end of slavery, but the runaway slaves rushing to their lines were not quite free. The Second Confiscation Act, issued on July 17, 1862, stated that all slaves owned by persons committing treason against the United States would be free, and they may be employed as deemed necessary to help suppress the rebellion. Former slaves like Charles could now be used as laborers for the U.S. Army. Charles would be payed for his services, but it still may not have been the freedom he envisioned. Unfortunately for Charles, the end of his known story is not with the U.S. Army.

Although it is not entirely certain, it is likely that Charles was still among the thousands of African Americans within the contraband camp in September 1862. From September 13 to September 15, Confederates under Thomas "Stonewall" Jackson besieged the town until the Union garrison of about 12,500 capitulated. While the 12,500 white soldiers were being paroled and sent North, the thousands of contrabands, including Charles, within the contraband camp were rounded up and sent South, back into slavery. It is not known what the fate of Charles Stewart was, or if he ever experienced true freedom. Although seldom discussed, this occurred any time Confederate armies invaded the North. Any African American they came across, free or enslaved, would be sent South. Jubal Early's command was late to one of its objectives when it invaded Maryland in 1864, because they were too busy capturing African Americans.

A week after Charles' presumed capture, Abraham Lincoln issued his Preliminary Emancipation Proclamation. Ending slavery had now become the cause of the United States, and the United States Army, which would end up including 180,000 African American soldiers, about 10% of the total fighting force, would truly represent freedoms for slaves.