Four Things I Learned From "Hamilton" The Musical

Four Things I Learned From "Hamilton" The Musical

How the hip-hop hit teaches both history and life lessons. 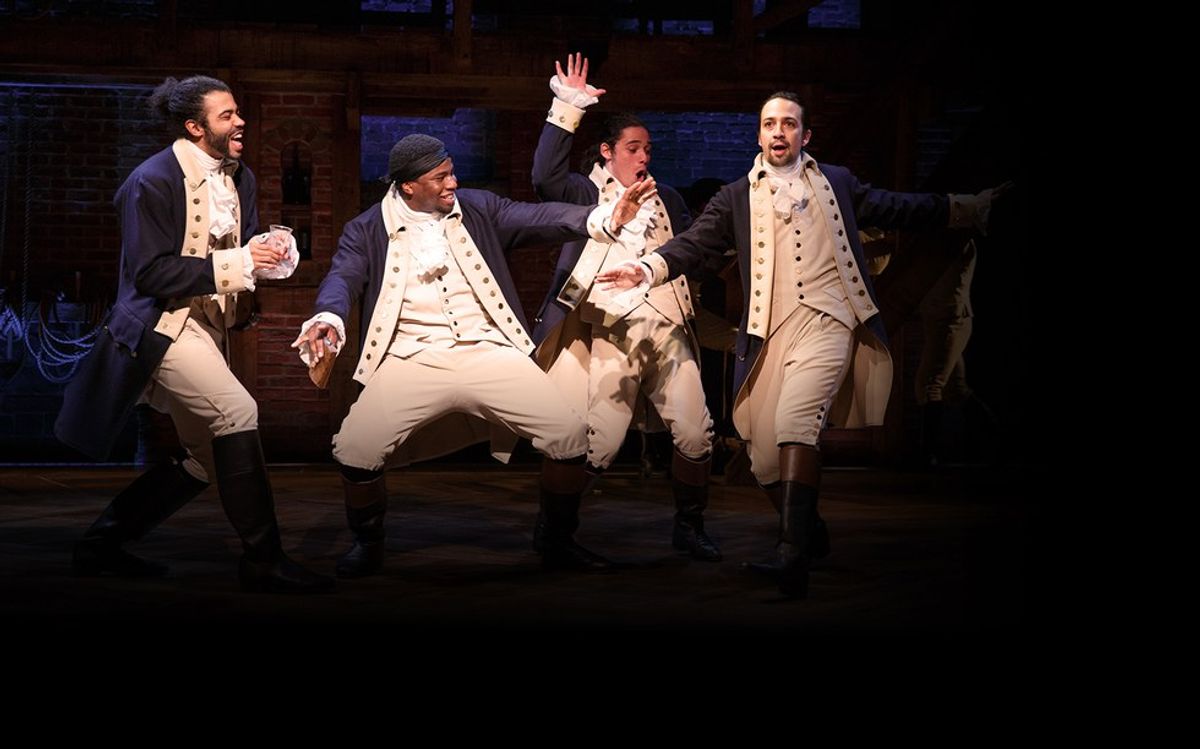 "Hamilton" is the latest smash Broadway hit, bound to snatch up a fair amount of Tony awards. In the past month my playlist, YouTube and Tumblr dashboard have been swallowed by this insane musical, slowly taking over my shower jam sessions and endlessly annoying my roommate. "Hamilton" is a hip-hop musical, one of the first of its kind, written and starring in the Heights’ writer and star Lin-Manuel Miranda as Alexander Hamilton himself. A man of many talents is the perfect shoe-in for "Hamilton," who proves to embody America’s early determination. But what does any of this have to do with me? Throughout being consumed by this musical, I’ve deeply related and discovered some life-lessons everyone could whether starting a revolution or an exam.

I am fortunate enough to be surrounded by people who have done nothing but believe in me and my life’s ambitions, which is why meeting people who snuff down at me or think me a ridiculous person (which, don’t me wrong, I am), is so shocking. But I fought hard to be where I stand today, through mental illness and other serious episodes no teenager should have to go through. The first time I heard this song, I felt relieved. Somebody understood me! Somebody put what I felt into words! Sure, it’s about a man wanting his chance in the revolution, but isn’t that what we all want? To seize any hard-earned opportunity to change the world?

I am the kind of person who spent nearly an hour choosing a pocket-watch once, and returned a tee-shirt three times before I was satisfied. But being more decisive isn’t all I need to work on. Knowing my own limits as well. Hamilton married one sister and had a long-running affair with another, not committing fully to either sister Schuyler. To be content with what one has is a very important life skill, along with learning to get the most out of life. Become satisfied, but know your limits or you will push them too far. Burr was right on that one.

If you’re going to do something, even if it’s something stupid, do it all the way. Don’t half-ass or fake it, but use every power you have dedicated to the cause. America won partially by luck and timing, but that luck was hard-earned through strategy and creativity. Work hard and love just as hard, and I try to do little things to show how much I care. Remember dates, make a point to tell someone I’m listening if I’m multitasking, giving people my full attention as much as I can and respond thoughtfully. I’ve found that my relationships have only grown stronger, and it’s easier to let people into my life when they know that I’m listening wholeheartedly. And don’t be a British king singing Brit-pop in the middle of a hip-hop musical. Could he be the villain any more obvious?


4. "Knowing History Has Its Eyes On Me"

We live in a time of what some people have called the “Second Civil Rights Movement.” I tend to agree with these people, although I would like to think historians will eventually give my generation a more creative name. With the #BlackLivesMatter movement, bills being proposed for women on currency, "In Her Shoes" marches against domestic violence, along with equal pay and plenty of other equality rallies. It’s hard to take a deep breath without inhaling some sort of new, important information. But what will I do with it, personally? I might not be in the text books, but will I be able to look my grandkids in the eyes and tell them what I did in my youth? Can I say that I fought so mommy gets payed the same as daddy, that their black friend can walk down the street with his hood up and people will only see some teenager minding his own business or that they can use the bathroom according to their true gender without fear? It’s all up to us. A little scary, don’t you think? But if Hamilton can become Washington’s right-hand man at age 22, I can go out and vote for what’s right.