Some SPOOKtacular ideas for when you and your BOO thang want to CREEP it real. 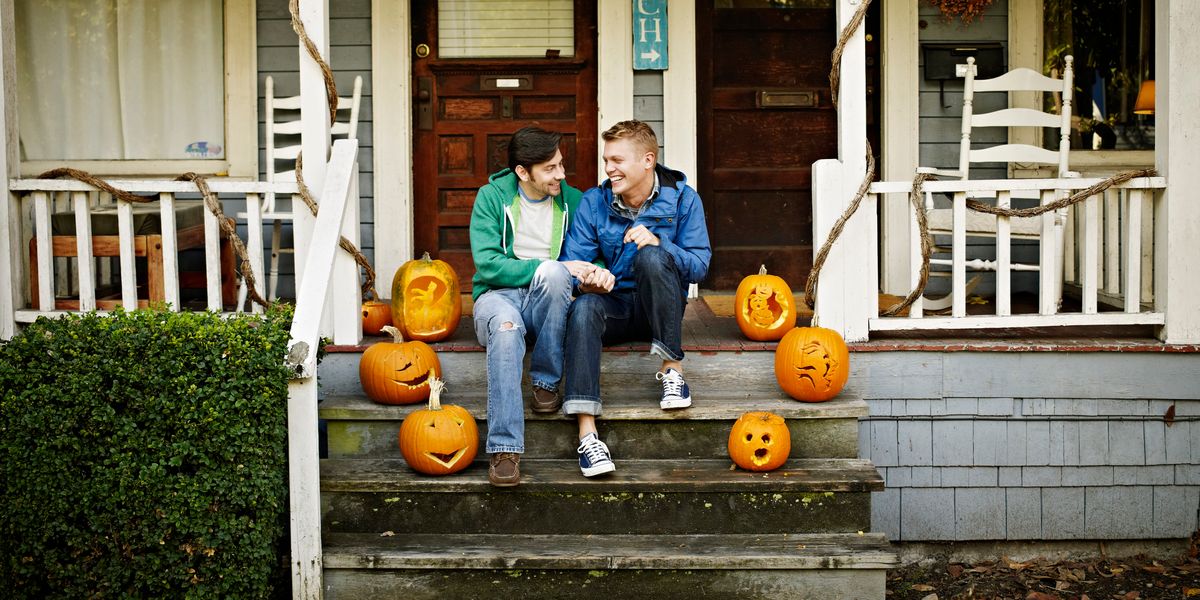 Aww, yes. Halloween is just around the corner!

And that means brisk breezes, hordes of candy for trick-or-treaters (as well as some luxurious gourmet chocolates stashed for yourself), and the premiere of Halloween costumes. However, for us queer folk who are queer as folk, it can be difficult to find solid choices for Halloween costumes, especially couples costumes.

For a very long time, heteronormative media portrayals have left us with relatively few idols to choose from; the majority of the "couples" costumes listed below are women who are BFFs or men with a serious bromance.

That being said, hopefully some of these ideas strike some inspiration for you! Because, please, we can only take so many Sexy Up costumes per year (you know, like the Disney movie with the cub scout and elderly man...yikes!).

1. Piper Chapman & Alex Vause from "Orange Is The New Black"

It'd be a crime not to go as Piper and Alex this Halloween! Simply grab some orange or cream-colored scrubs and you and your girlfriend can easily pull off the iconic couple of Litchfield Penitentiary!

Let that gay subtext that shines through each Batman comic shine out on Halloween...as bright as the Bat Signal.

Jinkies! This makes the perfect costume for any groovy, mystery-solving duo!

“I'm pretty sure there's a lot more to life than being really, really, ridiculously good looking. And I plan on finding out what that is.”

No, they're not a couple, but, yes, everyone wishes that they were. Why not pay homage to the queens of comedy by dressing up as these dynamic gal pals?

6. The Various Stages of Forrest Gump

Who says that a couple actually has to go as separate people? Bring a box of chocolates along with to complete this sweet look.

(Or you can just once again channel your inner Tina Fey and Amy Poehler...it really doesn't matter!) As long as one of you has a paint suit (any color will suffice) and the other can whip out an Alaskan accent, then you'll be golden (in red, white, and blue, of course).

THIS IS NOT A DRILL, PEOPLE. IN RESEARCHING LGBT+ COUPLES COSTUMES FOR THIS ARTICLE, NONE HAVE PORTRAYED THE BROTUS, YET. DO NOT MISS OUT ON THIS OPPORTUNITY. Also, earn extra brownie points if you make identical friendship bracelets.

This look is perfectly achieved with some thrift store shopping. Just aim for the cat lady look crossed with a zany librarian, avid patchwork feminist, and turtleneck connoisseur. The costumes are sure to be Candace-stic and Toni-rrific!

One of the most underrated television bromances of all time. Brownie points if you somehow incorporate a pineapple into your costumes!

This is an easy and inexpensive DIY costume that's sure to be on point.

Aren't we all just looking for the Bert to our Ernie? *sigh* Well, if you find yourself a fella who looks that good in striped sweaters and loves you as much as he loves his rubber ducky, hold on tight.

Bonus, these costumes also work perfectly for an Ugly Sweater Christmas Party! Just make sure the sweaters aren't too thick...you don't want to end up all Schweddy.

This couple's costume is anything but EEEEEEEVIL. Extra brownie points awarded for posing as if you're in your invisible boatmobile.

For this costume, all you need is faith, trust, and pixie dust! (As well as someone who will never leave your side!)

Feel the BURNs. This costume is sure to blow everyone's hearts to SMITHERSeens. It'll be excellent. *maniacal finger twiddling*

Pay your respects to these breath-taking beauties by showing up in their most iconic looks: the long, fitted black dress, string of pearls, and long cigarette in-hand that adorned Hepburn in "Breakfast at Tiffany's" and the sultry, flowing white dress that Monroe wore in "The Seven Year Itch." (Just watch out for those subway grates!)

As long as one of you goes as Rango.

If you and your significant other can find some yellow dresses and red aprons, then this makes a perfect last-minute costume. Just be sure to pack some homemade cupcakes for good measure!

If you're ever having a bad day, just go and check out Neil Patrick Harris' album of family Halloween costumes. Also, family goals.

On a plus side, if you go as Abbi and Ilana, you don't have to smile if you don't want to.

This costume is perfect for the guy who always has your back.

"And as the years go by,
Our friendship will never die.
You're gonna see, it's our destiny:
You've got a friend in me."

24. Carpool Karaoke with James Corden and literally any other celebrity

This is a cute and easy-to-DIY costume that's perfect for any duo who can't help but sing along to jams while driving.

Not only is this an adorable couple's costume, but you'll be perfectly prepared for spotting the Great Pumpkin.

Who needs to catch them all when you've already caught the one?

Pay homage to everyone's favorite early 2000's animated adventure musical fantasy comedy film. Even if you can't con your way into finding the lost City of Gold, at least you may learn that having each other is the greatest treasure of all. *Awwwww*

If you love the film "Napoleon Dynamite," or simply can relate to Napoleon and Pedro on any sort of spiritual level, then this may be the winning look for you and your socially-awkward significant other.

I swear, y'all, this was my original OTP. One is funny, short, and round, while the other is basically a giant blue and purple teddy bear. Not to mention, Mike and Sulley showed that two men can love, protect, and nurture a child (and that resonates volumes to any queer-identifying child unsure about their sexuality and their future).

31. And, last but certainly not least, two of the greatest LGBT icons in history... Pennywise & the Babadook

For those with a flair for the frightening, Pennywise the Clown and the Babadook may be the coolest costume combo. They may be somewhat new LGBT+ icons, but some fans swear by this modernized (albeit only theorized and fictitious) Romeo and Juliet. Plus, after your Halloween party, you and your boo thang can get crepes and terrorize some kids together.