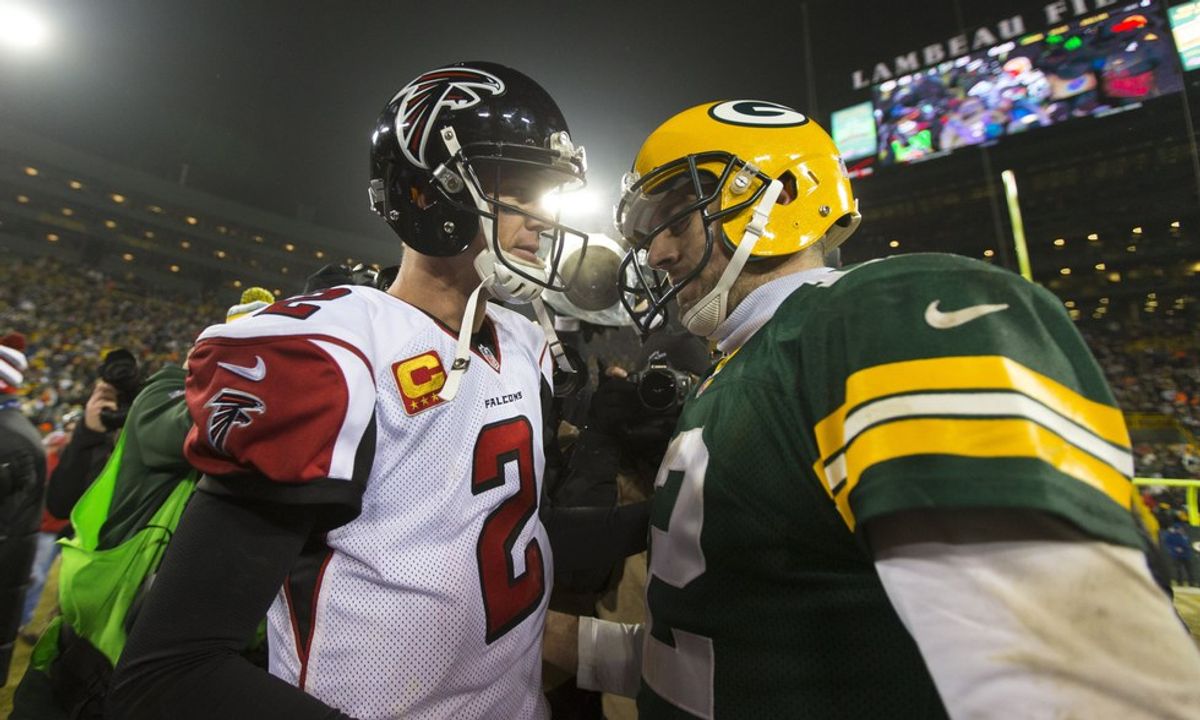 We are one week of football away from knowing who will be playing in the Super Bowl, and the narratives are through the roof. Will we get AR12 v TB12 for the title of Best of All Time in the Super Bowl? Will Matt Ryan get the chance to further his legacy by appearing in the big game? Will Tom Brady get the chance to become the QB with the most rings in NFL history? Time to find out...

Daniel: The magical run that quarterback Aaron Rodgers has had himself this season going into the postseason has been some of the best quarterback play by far. But he is coming to the Georgia Dome for the last game ever at the stadium and these new ‘dirty birds’ look ready to have the dome go out in style.

Green Bay’s injury depleted secondary is the concern for the Packers despite their main playmakers being questionable with injuries. Breakout receiver Davante Adams is dealing with an ankle injury, while Geronimo Allison has a nagging hamstring injury. These two will more than likely take the field but the question remains, is Jordy Nelson playing with his broken ribs? Look for the combination of the tight ends for the Packers, with Richard Rodgers and Jared Cook to be key for Rodgers to put numbers on the board.

Now Hotlanta should be ready to fire on all cylinders. Behind the duo on the ground, Tevin Coleman and Devonta Freeman, they proved they can handle the bulk by run or catching passes out of the backfield. Wide receivers Mohamed Sanu, Taylor Gabriel and Julio Jones should have a field day with the depleted secondary.

Winner: As much as I want to see Rodgers continue his epic postseason run, he can't do it all. The injuries on the secondary let's the ‘dirty birds’ start making plans in the H town.Eddie: The Atlanta Falcons should be favored in this game, as they are a historic offense playing at incredible levels of efficiency and doing an amazing job involving all of their offensive pieces. The often mentioned stat to favor quarterback Matt Ryan’s offense is the 13 different players he has thrown a touchdown to, the most in NFL history. Look for Ryan to target the backups in the secondary if safety Morgan Burnett and cornerback Quinten Rollins miss this game, as they are listed as questionable in the official injury report.

For Green Bay, tight end is the name of the game. Atlanta’s impressive rookie duo of linebacker Deion Jones, and safety Keanu Neal will shadow Jared Cook and running back/wide receiver Ty Montgomery, who will be quarterback Aaron Rodgers’ primary targets in case Davante Adams doesn’t play. Rodgers and Cook gave the Packers a chance to kick a field goal as time expired to beat Dallas on the road, so expect head coach Mike McCarthy get Cook more involved in the game plan due to his ability to be a mismatch in the passing game with his speed and athleticism.

The Packers have an uphill battle to fight in the Georgia Dome, but they can be competitive if Aaron Rodgers continues his unprecedented level of quarterback play. With that being said, the Falcons are a more complete football team and have the league’s MVP at quarterback as well, so that gives them enough to edge these Packers.
Winner: Atlanta Falcons

Daniel: Tom Brady and the New England Patriots will host the ‘Killer B’s’ of the Pittsburgh Steelers in Foxborough. Can the Patriots dominate at home like Brady’s post season home record indicates--16-3--or will the magic of the beehive lead the Steelers to Houston? Either way, each team will make a record ninth appearance the big game.

Pitt will need to feed Le'Veon Bell, chew up clock and not let Brady and company take the field as much as they like. The combination of Antonio Brown making a big play here and there on cornerback Malcolm Butler will be the matchup to see. If Brown can get yards after catch, Steelers could pull it off. Big Ben will need to play smart in a place where he has not won a game in the postseason.

Coach Bill Belichick, will be looking to make another appearance at the big game. All trust will be in Tommy Uggs but the combination of the run game provided by Legarrette Blount will have this team controlling the clock and tempo. Brady who picked part the best defense in the postseason last week will face a young defense that has come together at the right time.

Winner: Tommy Uggs is just clutch at home, continue the redemption tour and give it to the commish. Side note: *crosses fingers for a Rodgers vs Brady Super Bowl.*

Eddie: The Patriots are not very happy with their performance last week--despite winning the game by close to 20 points-- and it is hard to imagine something scarier than a Patriots team with something to prove… that is until you look at Brady’s stat line against head coach Mike Tomlin’s Steelers. In six meetings--including playoffs--Brady has thrown for 19 touchdowns and 0 interceptions, averages 314.8 yards per game, has a 71.2 completion percentage, and can brag about having the highest passer rating against a single coach, 127.5.

For the Steelers, Le’Veon Bell looks like the best running back in football right now due to his unique skill set, receiving ability, and football IQ. However, the Patriots defense has played 7 games against top 10 rushers this season (including Bell), and they haven’t allowed 100 yards on the ground. During those games, the defense only allowed one rushing touchdown and 66.7 yards per game.

Winner: There is no stopping this New England team on their way to Houston.

Glorie Martinez
1226
Why I Write On Odyssey