Controversy caused by racist incidents in majority-white Greek life organizations is nothing new. The latest shook the campus community at UA Little Rock during a crucial time for student government. 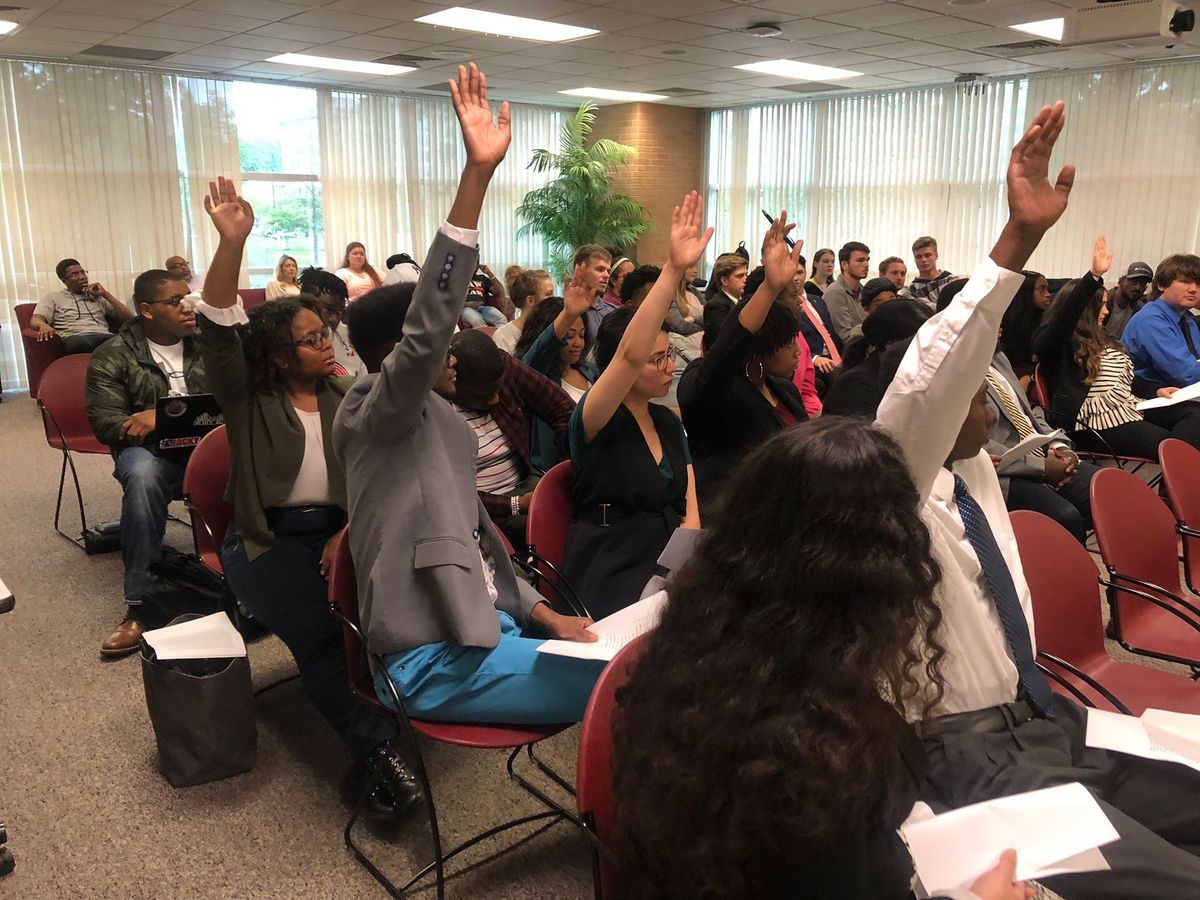 surrounding racist incidents in majority-white Greek life organizations is nothing new. The latest shook the campus community at UA Little Rock during a crucial time for student government.

It’s not often that members of the University of Arkansas at Little Rock’s Student Government Association find themselves voting on the impeachment of a fellow officer, and even less common are discussions about acts of racism. However, both become the topic of focus in last week’s SGA meeting on Monday, Apr. 23, after a member of the Student Government Association reposted a video that received over 7,000 views and has caught local media attention.

Makell Swinney is a political science major at UA Little Rock and Chief Justice of the Student Government Association. Recently, Swinney and his running mate Senator Paige Topping ran in student government elections for president and vice-president. The results from this election and the certification of those results were the first topics to be discussed at this meeting.

More specifically, the students were singing a verse from the song “Freaky Friday” by Lil Dicky and Chris Brown. The song itself has stirred controversy due to its content: the lyrics describe Lil Dicky, who is white, switching bodies with Chris Brown, who is black, and involves the white rapper gleefully using racial slurs with the justification that he’s “allowed to” because he’s now in a black person’s body.

A similar story actually made headlines last year, when white members of a women’s sports team at Virginia Tech faced disciplinary action after a video surfaced of the students singing the exact same verse from this same song, shouting the same slurs.

SGA’s Chief Justice Makell Swinney saw the video on social media and reposted it on Facebook, calling the incident “atrocious”.

“I hope all of you who attend UALR, who work at UALR, are happy because the President Elect and Vice President Elect of the Student Government Association, are members of the two organizations that were caught in the video. This is who you all voted for. I’ve had several people (white people might I add) already tell me to pipe down, to not play into this. And it’s not been the first time I’ve been told to pipe down on racial injustices at UALR, either.”

However, current SGA president Brian Gregory explained to the members of SGA that the president-elect and vice president-elect did not “technically” break any of the election guidelines or fail to uphold the Student Government Association constitution and bylaws. As a result, the election results were certified.

“The Student Government Association at the University of Arkansas at Little Rock is deeply disturbed by the actions of two Greek organizations, Pi Kappa Alpha Fraternity and Chi Omega Women’s Fraternity, this past weekend. We stand firm with our university and our student body condemning their actions.”

On the other hand, a group of students in SGA did feel that Swinney failed to uphold the constitution when he reposted the video on Facebook and tied it to the student government election results. Even SGA president Brian Gregory, at one point, cryptically reminded everyone to consider “freedom of speech” while making their decision. As a result, Makell was held on trial. The President Pro Tempore of the Executive Oversight Committee, Larry Dicus, read a list of charges.

SGA members had to call to extend discussion time three times before voting. Several of the students questioned the charges on the document, including the implication that Swinney is responsible for “false accusations”. In fact, as one senator pointed out, Swinney had not made any direct accusations against the president-elect and vice president-elect besides pointing out their membership in the organizations pictured in the video.

In the end, the overwhelming majority voted NOT to impeach Swinney. When SGA president Brian Gregory was asked about the status of the organizations pictured in the video, he simply stated that they are going through the disciplinary process.

“We always have to be careful of what we say, especially in emotional moments. And it was a highly emotional moment,” says Gregory. “What happened in the video was uncalled for, it was unacceptable. But as SGA president and representative of the organization, and one of the ones helping out with the election: we felt it wasn’t the best judgment […] as SGA we’re supposed to remain neutral.”

"They [the students in the video] had the right to do that," he added.

Mat Wheeler and Caddo Lowry, UA Little Rock’s president-elect and vice president-elect, are in leadership positions in the Greek organizations that were involved in the racist incident that went viral. Though the two individuals were not pictured in the video, their election win is now receiving backlash from many members of the campus community who feel that their role in these organizations are significant.

“Those two are a representation of the school and students, so they are representing us. No one is accusing them or assuming that they are just like those in the video; however, birds of a feather flock together.”

Chief Justice Makell Swinney could not be reached for comment.

There is also a public forum on UA Little Rock’s campus in the Donaghey Student Center (Ledbetter Hall B) at 2 PM on Tuesday, May 1 “regarding the university’s ongoing commitment to increasing diversity and inclusion.”

5 Arkansas grassroots orgs that are doing work where it’s needed most.