Get behind the movie magic. 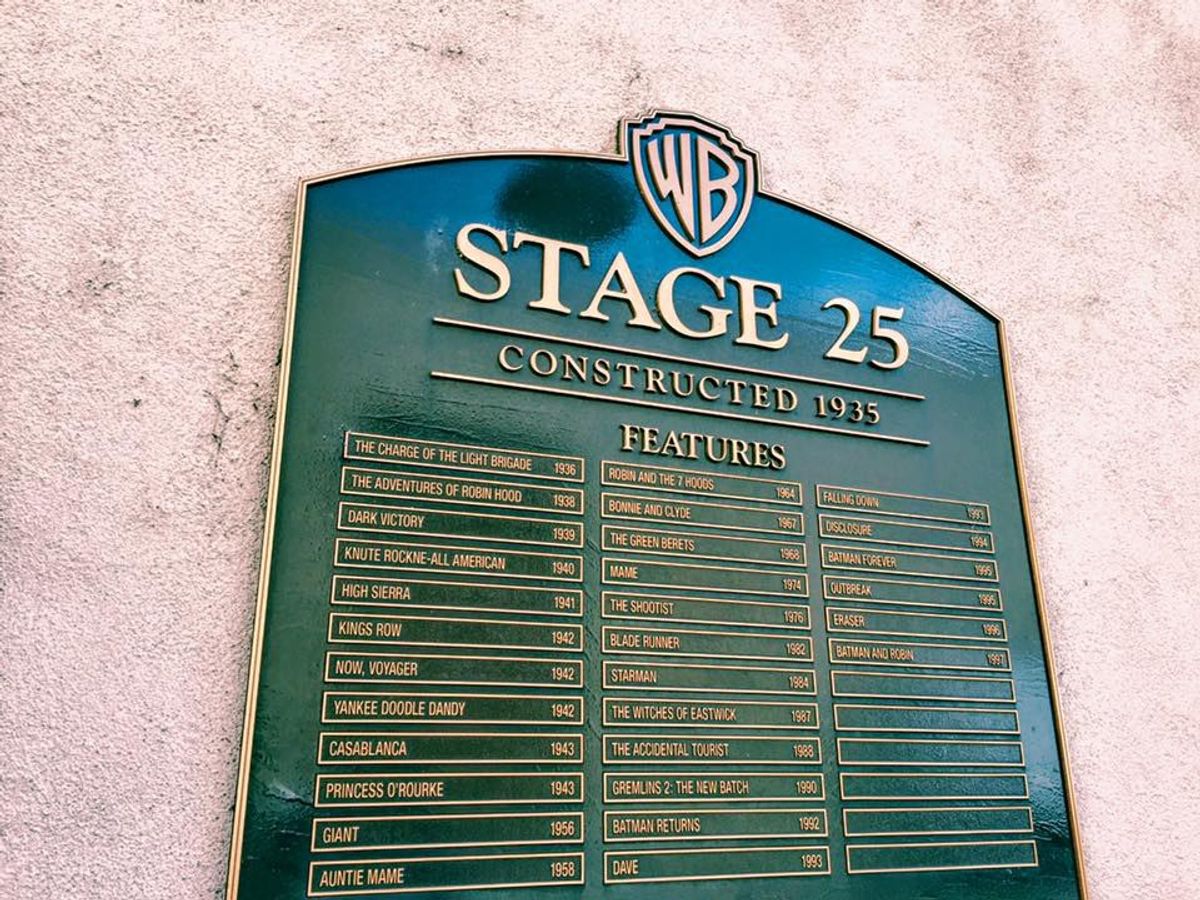 I had the unique opportunity last weekend to go behind the movie magic at Warner Brothers Entertainment Studios to not only visit production sets such as Gilmore Girls, Friends, Big Bang Theory, Chuck and Pretty Little Liars, but also to get the inside scoop on how the world's favorite movies and television shows are made. From script, to stage, to screen, our Warner Bro's studio tour guide showed us all the ins and outs of the entertainment business. Aside from being completely star-struck standing on the porch steps of Lorelai Gilmore's house and being sorted by the same sorting hat used in the first two Harry Potter movies, I learned some unusual, insightful and downright shocking facts about Warner Bros Productions and what it takes to work on a film set. Here are 13 facts you probably didn't know about Warner Brothers Entertainment:

1. Warner Brother's is a television powerhouse with 75 TV shows currently on the air.

The 100, The Big Bang Theory, Legends of Tomorrow, Ellen, Fuller House, Lethal Weapon, Pretty Little Liars and now the Gilmore Girls Revival are just a few of the extraordinary Warner Brothers television shows that are on the air currently. From the major success of earlier shows past like Friends and Gilmore Girls, the foreshadowing of Warner Brothers powerhouse television wave were in the stars from the start.

2. Warner Bro's studios is home to the only Jungle lot still in use.

Since most movies are now filmed in foreign lands outside of the studio, many production companies have no more use for their jungle lots. They can always go to the real jungle. Warner Brothers jungle lot, however, is the last one to still remain in use making star appearances in Chuck, Gilmore Girls, The Little Rascals, Pretty Little Liars and Jurassic Park.

3. In Warner Bro's Suburban Village lot, the houses are merely for show, doubling as writing studios.

Warner Bros jungle lot leads into a suburban neighborhood lot used in shows like Gilmore girls as part of Stars Hollow. Ironically, most of the houses you see on the street are not actually filmed in. Rather, they are used as writing studios for the production teams. The more room for scripts, the better.

4. Trees in WB's Any Town USA lot are seasonally changed by hand, one leaf at a time.

Since Warner Bros is based in southern California, seasons do not change naturally. This is where movie magic hits its high point, in the branches of the lot trees. One by one, stage hands hand-pick the leaves off the trees and either cover the bare trees in snow or zip-tie fall leaves onto the trees. It's a rigorous process that usually takes about a week to transform Any Town USA from a green summer paradise to a winter wonderland or a fall of colors.

5. What you might believe is the footsteps of the actor on television, is actually a grown man in high heels.

Since real life is full of outside sounds like cars, birds, wind and so on, producers need to get creative with how they emphasise sounds on set. When it comes to the footsteps of the actor, rather than hearing the footsteps of the actor themselves, you're actually hearing any stage man available put into heals and walking across the floor of the house. Picture that next time you see (or rather hear) a pretty actress walking down her porch steps for her first date. It's really just a grown man in heels.

6. Any Town USA lot is also home to the last remaining film set of Casablanca

No more Casablanca sets remain except on the street of Any Town USA in Warner Brother's Studios. Little did Lorelai Gilmore know that the one and only remaining set of her favorite movie was just right down the road.

This is where all the street scenes in Friends were filmed and continues to serve an invaluable part in countless Warner Brothers movies such as Argo and Wolf of Wallstreet.

8. Back in the 30s, the WB's water tower was actually used to put out fires.

The water tower all 90s kids grew up with wasn't just a famous Looney Tune logo, but an actual water tower. However, after watching the tower rock back and forth due to repeating earthquakes, Warner Bros decided the tower would be best preserved empty.

9. WB's allots five days for each live Sitcom show appearance, each day with a different and unique purpose.

The first day is dedicated to table readings and run-throughs. On day two the actors work on blocking, or choreographing, to make sure that with each line recited, they hit the small tape marks on the stage telling each actor where to stand for each scene. Day three is network day where standards for the show are analyzed and approved and day four is for pre-shoots, or anything that is filmed off location. Day five is the big day, show day! Dress rehearsals take place in the morning, the actors break for lunch then head to the sound studio where they perform their hard work in front of a live audience.

Contrary to popular belief, Warner Brothers does not use automated laughter for their sitcoms. It call comes from their live studio audience. A big reason why WB performs their sitcoms live is to make the script, in a sense, funnier. If the audience doesn't laugh at a line, the writers will adjust the script until they get the reaction they want.

11. It's FREE to be a part of the live studio audience for a Sitcom show.

That's right, it's completely free to see your favorite sitcoms live at WBs Studio. However, the trick is actually getting the tickets. tvtickets.com is where you go to not only purchase tickets but also see when tickets for certain shows will go on sale. A tip from WBs is to sign on two minutes before ticket release and keep refreshing until you see the "select ticket" button. Then move as fast as your fingers will carry you!

Stage 16 is where the t-rex in Jurassic Park first broke free from it's cage, scaring the pants off of audiences everywhere. It's also the stage where Warner Bros filmed The Perfect Storm and where Mark Wahlberg got seriously sea-sick.

From rotary dial phones of every color, to cell phones of every shape and size, the phone shelves is just a small portion of movie history residing in the incredible maze of Warner Brother's prop house.

Stage 7 is referred to as the lucky stage because it was the set for three of Warner Bros Oscar and best picture winners: Casablanca, My Fair Lady and The Life of Emile Zola.