There are too many people in college who still mix up the basic "there, their, and they're", so here's a compilation of grammar rules that are essential to sounding sophisticated and doing well on papers! 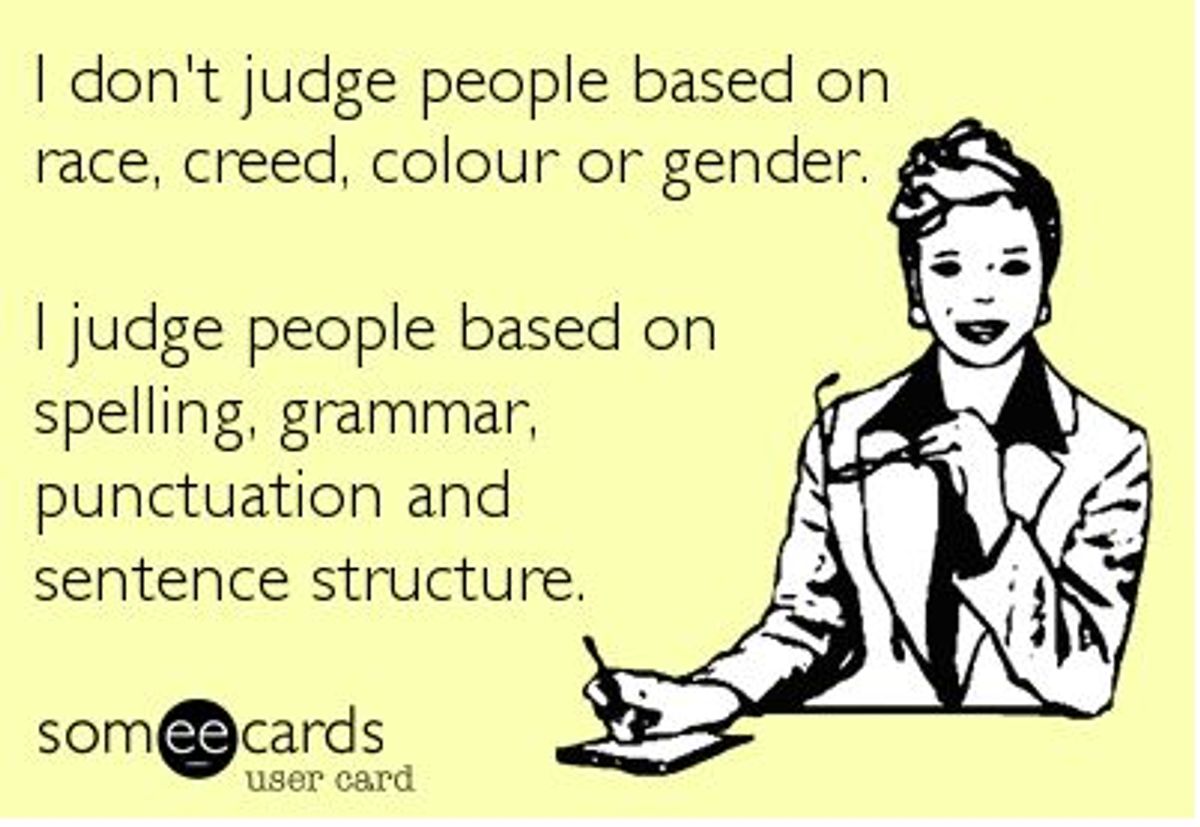 1. Semicolons - These tricky little suckers are used to separate independent clauses with closely related ideas. Often, people will use them as commas to interject a sentence, which is incorrect.

Were: If Kelley were a Zeta Beta Zeta, I'd want her as my big.
Was: When I was going through recruitment, I really liked talking to Kelley.

3. Farther vs. Further - Though the use of these words has become accepted as interchangeable, farther is used more often to describe physical distances, whereas further is used to describe a figurative distance

4. Anyway vs Anyways - "Anyway" is an adverb and "anyways" is used for the same meaning, but has a more colloquial effect. While it is not necessarily incorrect, "anyways" should be avoided in an academic or professional environment.

Anyway: President Doti, I'm sorry we couldn't speak longer, but it was great talking to you anyway.
Anyways: Anyways, it was so nice getting lunch! We should do this again soon.

5. But vs. However - These two are on the list because many people use "but" when they could use "however", especially when writing counterarguments.

6. Oxford Comma - This comma is placed before the conjunction in a series of three or more. Whether or not the Oxford comma (or serial comma) should be used is widely debated among different style guides and languages. In some situations, it creates confusion; in other situations, it eliminates confusion. Whether you use this comma is up to your discretion.

7. Good vs. Well - Responding to "How are you?" with "I'm good" has become so common and automatic that many people aren't even aware it's incorrect. "Good" is an adjective and "well" is an adverb, meaning that "good" describes a noun, while "well" describes a verb.

8. Effect vs. Affect - A lot of people admit that even though they try to remember the difference between these two, they still get confused.  Effect a noun that is used when something happens due to a cause (remember "cause and effect"). Affect is a verb that means "to change" or "to influence"

9. We vs. Us - The type of sentence these two get mixed up in isn't as common, but it's still helpful to know what's correct in case you decide to use it in a paper.

10. Passed vs. Past - These two sound exactly the same, so it's a bit challenging to remember what means what all the time. Passed is only ever used when referring to the past tense of "to pass". Past can be used as a noun meaning "before the present" or as an adjective meaning "finished" or "completed".

Passed: Only three days have passed since formal, but I still have constant withdrawals.
Past: Our formal on The Queen Mary is better than it has been in years past.

11. Adverbs - A lot of people know that adverbs are the words that end in -ly and that they modify the meanings of verbs, adjectives, prepositions, conjunctions, and other adverbs. However, there are too many casual conversations that eliminate the use of adverbs where they are needed.