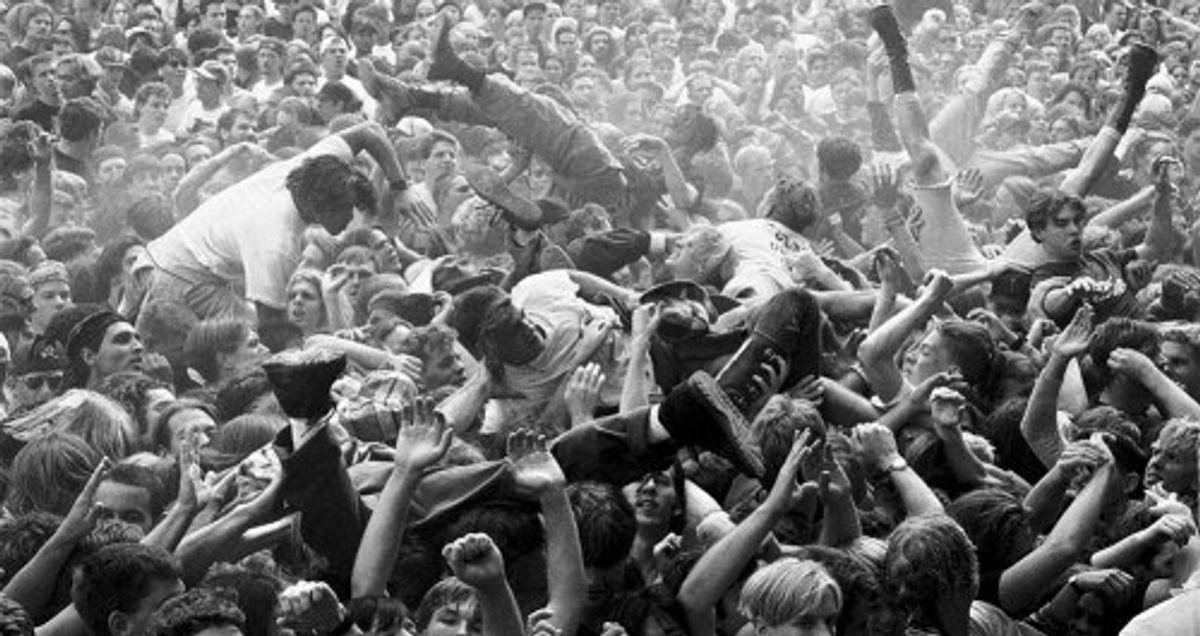 Moshing came about during the '80s hardcore punk scene, as a form of dancing at live shows. Mosh pits normally involve people pushing and slamming into each other and has become a staple of Metal and Punk culture. Many variations of moshing exist, including hardcore dancing, slam dancing, circle pits, push pits, and the infamous "Wall of Death."

While these very physical acts do come with the risk of injury, it is vital to the subculture in which they exist and serves as a very cathartic and surreal experience for many concertgoers. It releases frustration while also celebrating the beauty of music, transcending the act of listening, and compelling one to dance akin to conventional dancing.

The term, "moshing," was coined in the D.C. area, and emerged into the common vernacular due to bands like The Melvins, Nirvana, and Anthrax.

From my many experiences in a mosh pit, I believe them to be essential to Metal and Punk shows. However, many who participate, do so without the proper etiquette or manners required and expected by veteran moshers. Below is the unspoken list of guidelines for moshing. It often goes without saying, but some of these are really just common sense. So next time you hit the local bar scene to catch your favorite bands, keep these in mind.

1. Only mosh with those in the pit.

If someone's not in the pit, they don't want to mosh. It's really that simple. Keep your hands off of people who clearly aren't about it. Everyone has their own concert experience and expectations, so they may not want one that's that physical. However, on the flip side, if you do not intend to be a part of the pit -- STAY THE HELL AWAY FROM THE PIT.

As a bystander on the edge of the pit, it's your responsibility to catch people and toss them back in. Don't stand at the edge of a pit and expect not to catch a stray elbow to the face. Its a team effort and even those in the back play an important, if not vital role.

Don't underestimate how much you are needed.

3. If someone falls, pick them up.

Look out for your fellow moshers and don't let anyone get trampled. Chances are, a few other people will notice and stop the movement momentarily to check if the person's alright; otherwise, they will get trampled and you don't want that on your conscious, right?

4. If you hit someone mistakenly, or harder than you meant to, promptly apologize and check to see if they're OK.

Especially if you draw blood. Some will say it's not a real pit unless someone bleeds, but make sure that that person's OK. Some people take pride in getting a cut on the forehead during the action, but still check it out.

You should enter a pit fully knowing you might get hurt, but some don't expect the bruises and battle damage they'll find upon their bodies after their first few times.

5. Make sure someone holds on to your personal belongings if you're afraid of losing them.

It's sad when someone loses their phone, wallet, glasses or even a shoe in the pit -- if someone's with you and not moshing, ask them to hold your personal items. If you find someone's lost item, hold it up high so they can see it and not have to crawl around on the floor, underneath the pit. See number three.

6. Moshing is NEVER an excuse for groping a woman.

That's just never OK, no matter how you can spin it. You respect others in the pit, regardless of race, gender, ethnicity or religion. I've heard stories about women getting groped in the pit, and the rest of the pit ganging up on the guy who did it (Go them). So, you don't wanna be on the wrong end of that situation. I have a huge deal of respect for girls tough enough to hold their own in pits with big, burly brick wall-looking guys -- so in case, these women don't give it right back to you for groping them, best be sure those guys will.

7. Don't stand in the middle of the pit.

Have some common sense.

8. Going after specific people in a mosh pit is considered bullying, and it will not be tolerated.

No real explanation needed there. But also, don't make any situation personal or take it personally. If you do get knocked in the jaw, don't consider it a personal attack. And, as discussed before, if you do the same to someone else, see how they're doing.

A simple thumbs-up is usually a sign that they're alright and no hard feelings have been had. However, repeated "accidental" knocks to the head or anything with malicious intent does not have a place in the pit.

Don't jump in the pit wasted thinking you're god damn Bruce Lee; kicking and choking people. That's not moshing -- that's attacking people. A stray punch here or there is an excusable act because arms are flying, but don't enter the pit drunk. Enough time in the pit already feels like a natural high.

Overall, the biggest thing you can do is mosh responsibly. Don't be too reckless, and always make sure someone's OK if you end up going a little overboard. Generally, don't be that guy.