Your Cat Owns You

My House Belongs To My Cats, They Just Let Us Live Here 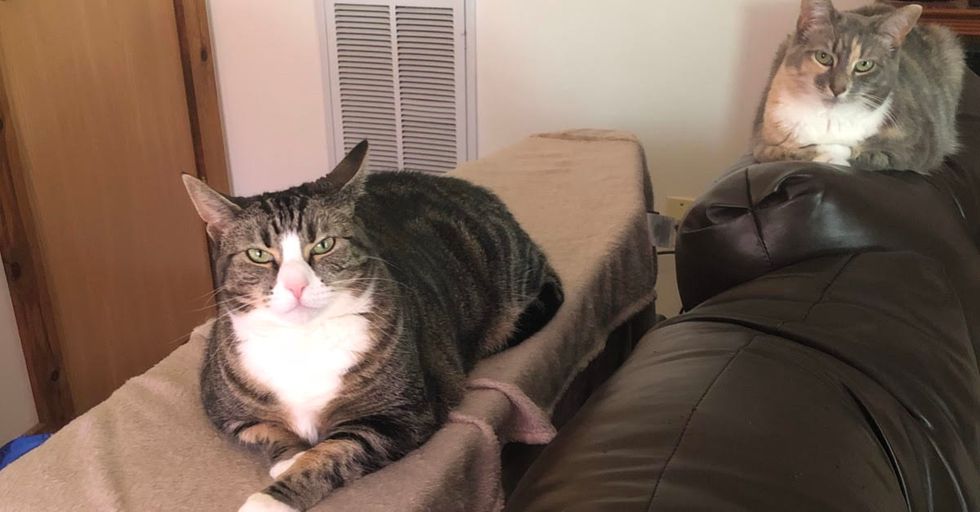 My Husband and I recently got back from a much needed 9-day vacation. We had an awesome time, riding down to Florida with my parents and brother in their RV. In Florida, we visited my Grandparents, swam in the ocean, relaxed on the beach, ate way too much, spent the day at Universal Studios, and took many naps.

But even though we were having a grand time, we missed our cats.

Thankfully they were left in the loving care of my forever best friend, who took care of their needs while also giving them lots of love and attention in the comfort of their own home (we had a terrible experience boarding them when we went on our honeymoon. They both came back with fleas and Bibi had a gash on her nose).

When we got home, Millie rushed right over to me. I picked her up and she wrapped her front paws around my neck and gave me kisses. Bibi, who adores my husband and lovingly tolerates me took a little while to forgive us for leaving. But by the end of the night, they were relaxed back into our normal routine.

When you go over a week cat-free, you kind of forget something about being cat owners: they are in complete control.

That thought hit me, as I was sitting sideways on the couch watching Downton Abbey on my laptop, with my arms outstretched flicking a ribbon in one hand, and a piece of yarn in the other, making it so Bibi and Millie were on opposite sides of the couch batting at their respective toy.

Speaking of cat toys, sitting in our living room is a mesh tunnel and a crinkly-velvety pouch/mat thing that we had to get in the hopes that Millie would play with toys instead of terrorizing Bibi (it rarely works). I absolutely hate the way it looks, but I shudder to think what she would do in its absence.

Millie in her tunnelPhoebe LaFave

Let them out once, and you just entered into a lifetime binding contract.

I made the mistake of letting Millie have outside time. She would always dart outside when we got home from work, so I figured it couldn't hurt to let her have some time to lay in the grass. *Facepalm.* Now, every single day when we get home she incessantly screams at the door. And because her crying over and over and over again is soul-crushing, she always gets her way. Six times out of 10 it's not an issue and she just rolls around on the pavement and chomps on grass. The other four times she darts across our complex, or under parked cars, causing us to sprint after her or crawl under our neighbor's vehicles. Bibi comes out occasionally but is usually overwhelmed after 20 seconds.

Both are guilty of it, but Millie is the worst when it comes to biting. Today she was all snuggled up at the end of the bed, purring and being all cute. I leaned down to kiss her cheeks like I normally do, and bam, bites me right on the nose, breaking the skin. She'll clearly want rubbings, and then will just snap and bite you. Bibi on the other hand only bites when she wants your attention or is being playful, which we do not encourage because, oww.

Bibi is normally so well behaved though. She is my husband's cat through and through and her favorite spot is anywhere that he is.

Which is why, if our door is closed for the night, she will paw at the door making a "swish, swish, swish, swish" sound for literally a full hour. I wish I was using hyperbole, but I'm really not. This girl is determined. And because it's impossible to go to sleep with the steady sound of paws scraping at the door, we let her in. And the cycle continues on, and on, and on.

Millie is our forever kitten.

Both are high maintenance, but Millie is "special." She was clearly the runt of the litter, as she's always been small and has a slew of health problems (asthma, bowel issues (blech), and has had light-induced seizures). She was clearly taken away from her mother too soon, she suckled on my finger for the first year of her life and a vet once said that she doesn't know how to communicate with other cats which is why she has never really been able to get along with others. But, with all of her quirks and moments of meanness, she also will decide it's time for cuddles and plop herself onto one of our laps, chests, legs, or pressed between us.

Pro tip, put your legs on the coffee table and your cat now has a hammockPhoebe LaFave

Bibi is a genius.

Roll your eyes, make fun of me, I don't care. Bibi is the smartest cat I've ever met. My husband adopted her when she was no more than eight weeks old. She imprinted on him instantly and ever since is in tune with him in a way that I have never seen. If he's stressed or upset, she places herself right on his lap. She has figured out how to open doors, she knows the sound of our cars, and I swear understands what we say to her as she truly listens to commands.

Add in generic cat stuff like: knocking anything and everything in reach off of flat surfaces, marking their territory, chewing on shoes and purses, demanding more food even though there's clearly enough in the dish, and randomly yelling at you, I think it's safe to say cats are in charge of us more than we are of them.

And they're so darn cute there's nothing you can do about it.

Related Articles Around the Web
pets
Report this Content
This article has not been reviewed by Odyssey HQ and solely reflects the ideas and opinions of the creator.
Swoon