10 Reasons You Should Be Watching 'Ted Lasso' Right Now

10 Reasons You Should Be Watching 'Ted Lasso' Right Now

No, you don’t have to like soccer. It’s just that good. 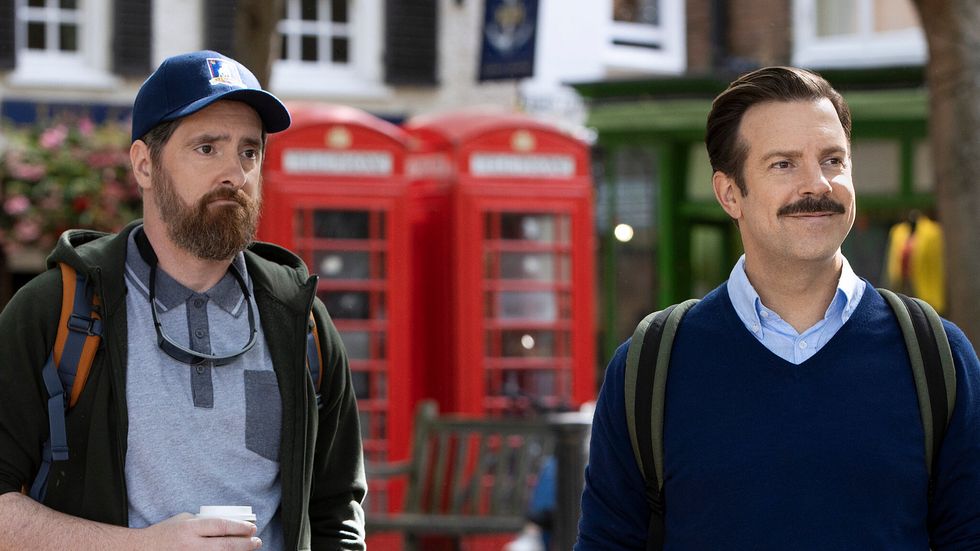 "Ted Lasso" found on Apple TV, is nothing short of extraordinary. The characters are lovable, the plot is engaging, and the optimism is much appreciated, especially in times like these. The show consists of 10 half-hour episodes detailing the story of an American football coach, Ted Lasso, played by Jason Sudeikis, moving across the sea to London to coach football there. The catch? He doesn't know a thing about soccer. Refreshingly, the show is not spent watching him trying to figure it out. Lasso believes in himself - and, even more touchingly, everyone else - with complete certainty, and it is this refreshing optimism that carries the show. Add in deep character development, light-hearted comedy, real-world issues of divorce and sexism, and characters I would die for, and you've got a near-perfect watch. Still not convinced? Here are 10 more reasons you should stop what you're doing and go watch "Ted Lasso."

With his charming accent and unfettered optimism, Lasso aggressively stands out in his new British home. With his quick and clever sayings, like “takin’ on a challenge is like riding a horse: if you’re comfortable while you’re doin’ it, you’re probably doin’ it wrong,” It is impossible not to smile at his charm. It is his kindness, however, that truly sets him apart. He goes out of his way to always do the right thing, without hesitation. He is truly impossible not to root for.

2. Everyone loves an underdog

Both Lasso and the team, AFC Richmond, are underdogs in the league, with absolutely no one believing in Lasso’s ability and Richmond’s threat of relegation, or being sent down a league due to their performance. These obstacles keep you on your toes as you watch, hoping things will get better and that Richmond will win and Lasso will become as beloved by his community as he will be by you (because he definitely will be loved by you).

I would describe myself as a very casual fan of soccer. Yes, I like watching the sport. No, I do not seek out ways to watch it, save for a friend’s game or if it happens to be on the TV. But watching the fictional players of Richmond play was perhaps the most I’ve ever been invested in any game. My sister and I stood up, cheering or booing, throwing our hands in the air and screaming at the - again, fictional - players to “PASS!! OH MY GOD PASS!!!” whenever a game was shown.

No, its not just the football players and male coaching staff. The owner of the club, Rebecca (played by Hannah Waddingham) struggles with her self-worth after a recent upheaval in her own life: her ex-husband, and former owner of the club, had multiple affairs during their marriage, creating a field day for the press and the only character I find completely unredeemable. Her desire for revenge on him mixed with her own personal morals and her journey towards being okay after such an experience creates an incredibly well-written character arc.

Another favorite is Keeley, who is introduced as the girlfriend of Jaime, the star player for the team, but quickly revealed as independent, as she makes her own as a model and has a remarkable ability to make connections with people. She is fun, flirty, and honest, but is truly marked by her way with people. Keeley has the remarkable ability to always be kind without ever sacrificing her self-worth or personal needs, a talent few people ever achieve and one I truly admire.

The friendship between Keeley and Rebecca is outstanding. Keeley helps her come out of her shell and boosts her confidence to the woman she used to be, while learning some strength and power from Rebecca herself. This friendship was a highlight of the show for me, and introduced me to the best of both women (not to mention by far passing the Bechdel test).

While certainly fun, “Ted Lasso” is not all jokes and games. The show goes into real problems too, including Lasso’s marital issues and the sexism Rebecca faces after her husbands affair. The show does not shy away from the impact this has on their lives, showing panic attacks, strained relationships, poor choices, and personal struggles to do better. I loved that they gave each character dimension and used the show to talk about the character’s lives, not just their role on the team.

Every character (save for Rebecca’s ex-husband) is given a some sort of growth, and the players are no exception. Lasso walks in to a locker room divided, with tensions high between the two leaders of the team: Captain Roy Kent, the angry football star who’s age is starting to catch up to him, and young Jaime Tart, the up and coming talent who lets his gifts go to his somewhat inflated head. Both characters are given a chance to show the audience more about themselves than initial introductions give. Even the smaller players, who are given less screen time, still have remarkable personalities. My personal favorites are Sam, the smiley recruit from the Nigerian team who misses home but is remarkably kind, and Danny, the talented player who rejoins half-way through the season with the energy and disposition of five golden retrievers. I love the attention given to each one - it makes the already-good show something remarkable.

There are several times I thought something romantic might happen in the show, especially with Ted’s incredibly-likable demeanor, but thankfully, they largely refrain from easy romantic plots. That’s not to say the show doesn’t have romance, as it does, but it also shows real relationships and, blessedly, does not feel the need to force every male-female connection into something romantic.

9. The feeling you get watching it

You’ll have to watch it to really understand what I mean, but the show just pulls you into a warm hug. I was completely invested while always left feeling happy and warm by the show, no matter the well-executed plot twist. In a time where so much is limited, the magic of this show is especially clear in the warm fuzzy feeling it leaves you with.

10. Because it shouldn’t be a good show

Perhaps the most compelling reason the show is fantastic is that, by all means, it shouldn't be. The show was based on a few short NBC promos with Jason Sudeikis when they got the rights to the English Premier League. They were fun, with most of the jokes based on the American-football/rest-of-the-world-football confusions. While a solid promotion, it should certainly not translate into any sort of appealing show. This should not have worked. And yet “Ted Lasso" stands as perhaps the best show I've seen all year.

Are you convinced you should watch this show now? Go stream "Ted Lasso" and enjoy!