Why We Need to Dismantle The Two-Party System
Odyssey
CurrentlySwoonLifestyleHealth & WellnessStudent LifeContent InspirationEntertainmentPolitics and ActivismSportsAdulting
About usAdvertiseTermsPrivacyDMCAContact us
® 2023 ODYSSEY
Welcome back
Sign in to comment to your favorite stories, participate in your community and interact with your friends
or
LOG IN WITH FACEBOOK
No account? Create one
Start writing a post
Politics

Why We Need to Dismantle The Two-Party System

Will we have the courage to dismantle the two-party system and return to the kind of American democracy that our Founding Fathers envisioned? 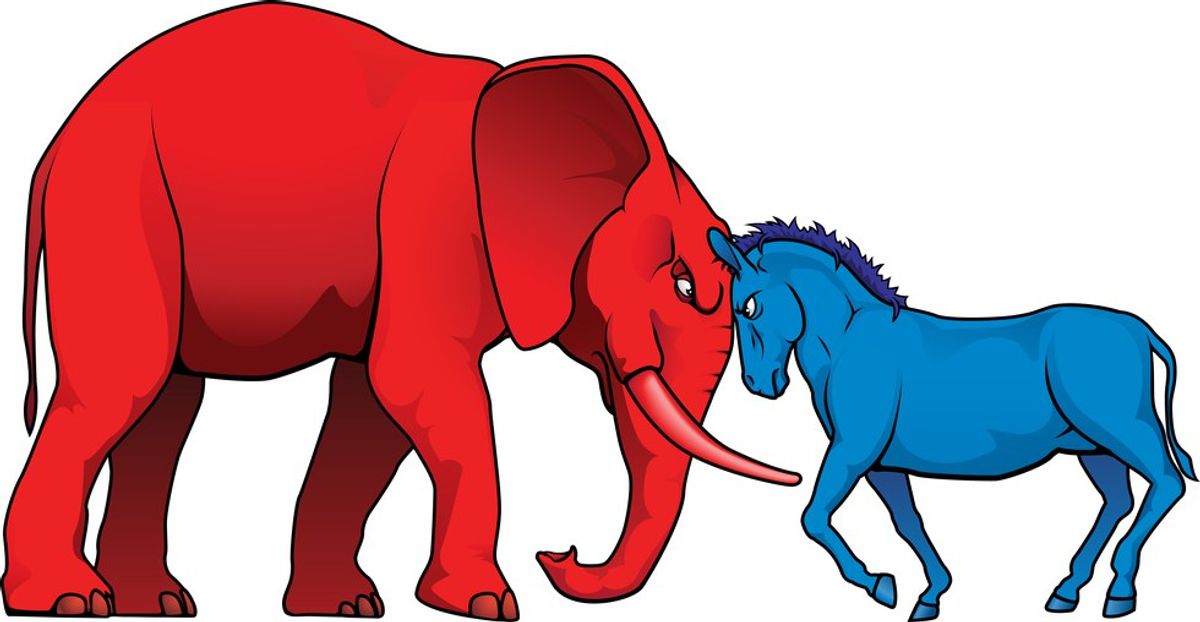 The two-party system has been a staple of American politics since the earliest days of the country. Prior to the modern day Republican and Democratic parties, the Whigs and Democrats dominated U.S. politics, and the Federalist and Anti-Federalist factions before them. This longstanding tradition of two major political parties dominating U.S. politics is a result of the “first past the post” system of the Electoral College. As a result, other political parties like the Libertarian or Green parties have only been able to achieve a limited - and often local - impact. The result is an America where citizens feel abandoned and manipulated by both major parties. The continual bickering and obstructionism carried out by both contemporary Republicans and Democrats is evidence that we have let sectionalism and partisanship drive America towards the edge of a dangerous precipice. It was George Washington who first recognized the threat to the U.S. posed by political parties, warning Americans of the “alternate domination” of one party over another and the tendency of political factions to seek revenge against each other, building up their own power while tearing down the U.S. Constitution. One only has to watch the evening news to conclude that this is the case. As a nation, we have failed to heed the wisdom of our first president—and the average American has paid a steep price for our tolerance of partisan politicking.

Those who defend the two-party system maintain that having two parties forces each party to appeal to moderate voters, as opposed to multi-party systems which encourage fringe candidates and radical political parties. However, I would argue that the ever-increasing hostility between the major parties in U.S. politics stems from the very existence of the two-party system. Instead of encouraging cooperation and coalition building, the binary options of governing as a majority or being an opposition party force the Republican and Democratic establishments to fight for their survival in a type of political-Darwinism that mandates each party must achieve victory at all costs or perish. Rather than arguing the merits of a policy or position, both the Republican and Democratic parties attack each other, each side viewing the other party and its supporters as an existential threat to our nation. This way of thinking is a byproduct of the lack of political and ideological diversity in U.S. politics that is a natural result of our two-party system. Moreover, regardless of one’s political ideology, the ongoing war between Republicans and Democrats is political theater at its finest.

Legislation implemented when one party achieves a majority, only to be overturned when the other party wins four years later, does not benefit the American people. There are appropriate times to rescind policies that are ineffective or harmful, but the reasons for abolishing laws and policies should not be simply partisan politics—they should be centered around a bipartisan analysis of the success or failure of the respective policies. But once again, the two-party system makes even this a near impossibility. Under our current two-party system, Republicans and Democrats have an incentive to capitalize on the failures of their opponents, turning mistakes or bad policy into ammunition to score political points and boost the public’s opinion of their own party. This victory-at-all-costs mentality is especially deleterious when it takes a priority over legislating effectively.

Both parties engage in this type of rigmarole, often at the expense of the American people. When Republicans in the House of Representatives attempt to repeal the Affordable Care Act more than 60 times, it does not benefit the American people. When Democrats in the Senate attempt to introduce and force a vote on gun control legislation that has been defeated repeatedly by a significant margin, it does not benefit the American people. Instead of focusing on issues which have overwhelming bipartisan support, the two-party system encourages each party to stake out opposite, and often extreme stances on national issues. Most Americans agree that our immigration system needs reform and that our economy needs to be reinvigorated. However, when it comes to fixing these problems, common sense bipartisan legislation is abandoned out of fear that one party will lose credibility for simply attempting to find common ground with the other.

At a time in which radical Islamic terrorism continues to claim more American lives, and American jobs are being outsourced to foreign countries, the American people deserve a real choice concerning the future of our nation. Will we continue to allow Republicans and Democrats to rob us of that choice, or will we embrace our individuality and reject the notion that we must check one of two boxes on the ballot? Will we have the courage to dismantle the two-party system and return to the kind of American democracy that our Founding Fathers envisioned?