Why The Ghostbusters Remake Is Important
Odyssey

Why The Ghostbusters Remake Is Important

Who knew that women could bust ghosts just as well as men? 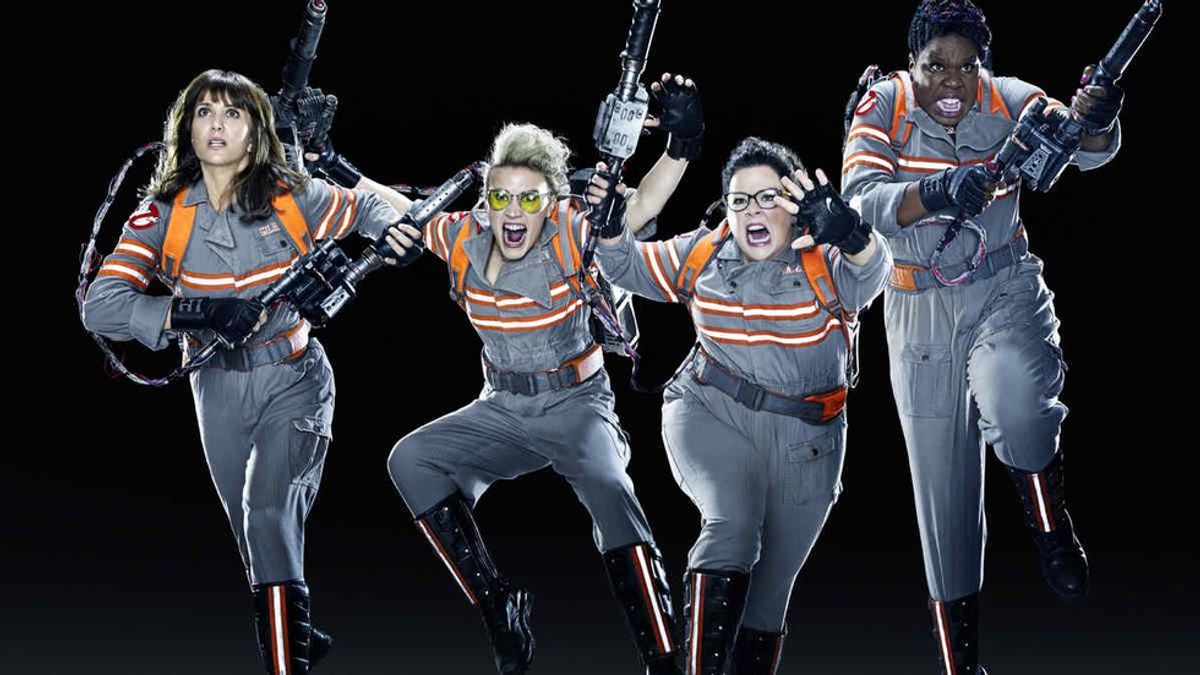 I'll be the first to say that I am tired of remakes and sequels dominating the box office. I feel like most movies that are released now are continuations or reimagined classics. The only remake that I haven't rolled my eyes at lately was the new "Ghostbusters" film. When I heard that a franchise that I had a lot of love for was going to be relaunched -- starring a heavily female cast! -- I knew that I had to give it a try. I saw the movie twice and fell in love. It was highly criticized and highly praised in its opening weeks -- it had been a while since I had heard such mixed reviews from people for one simple film. Many argued that remakes cheapen the experience of an older film, and others simply didn't like the replacement of the leading men with women. The movie was incredibly important to me, though, as something that I already loved. Here are a few reasons that I think the "Ghostbusters" remake might be one of the most important recent movie remakes. Be warned: there are mild spoilers ahead, so you should just go see the movie right now and report back.

It doesn't sexualize the Ghostbusters as they fight crime. When I first heard the news of a Ghostbusters remake where women held the lead roles, I feared the worst. I was so sure that the women would be gussied up in booty shorts and crop tops, catching ghosts with their physical attractiveness rather than their science. I was pleasantly surprised when promotional photos came out to reveal the women in coveralls and weighed down with gear. Don't get me wrong, I am an advocate for people wearing whatever they want to wear, but one can only sit through so many films featuring slim, pretty women seducing their way through a plot before they become discouraged. As someone who is neither model-slim nor interested in seducing people, I was thrilled to see women of different body types and features wearing garbage collector gear and souped-up vacuums to capture spirits, each one just as important to the operation as the next. While everyone should have the chance to decide how to present themselves, be it in lots of clothing or with minimal fabric, it was refreshing that sex wasn't the thing selling the film. It was the raw intelligence and determination of the women that helped them meet their goals and do their work.

It reinforces the idea that women can do exactly what men can. Shocking, right?! Who knew that weak feminine bodies were just as capable of battling spirits as chiseled man bodies? Oh wait -- lots of us have. For a long time. Despite the fact that women are just as capable as men, the media often doesn't let feminine people display their strength and abilities in the way that men do. Too often, women are depicted as "damsels in distress" who need to be saved rather than do the saving themselves. In the same way, this movie shows us that the Ghostbusters are mentally able to handle fighting ghosts as well -- they make decisions in the movie without those decisions being clouded by feminine angst and flowery thoughts! Who would have thought that women can fight ghosts just as well as their male counterparts?!

It lacks a romantic subplot. I absolutely loved this about the new Ghostbusters film. Aside from the light flirting between Erin Gilbert and ditzy blond secretary Kevin (more about that ahead), there is no romantic focus to speak of in this film. This crushes the idea that a movie featuring women in the leading roles has to have romance and men to make it interesting. This movie passes the Bechdel test with flying colors, and it makes no implications that women are best suited for wifely duties.

It challenges traditional gender roles. Both times that I went to see "Ghostbusters" in theatres, there was a collective swoon from much of the audience when Chris Hemsworth appeared onscreen as the secretarial candidate Kevin. Rocking tightly fitted jeans, a skinny red tie, and thick-rimmed glasses, Kevin was immediately assumed by many to be a knight in shining armor or love interest to the women. But as we saw him rub his eyes for the first time, we realized that he might not be the sharpest tool in the shed. The "dumb blonde secretary" role was filled by a man in Ghostbusters -- and this was the first time I've ever seen that happen. Pop culture is so quick to shove men and women into boxes for the sake of familiarity: men are the ones fighting and working while the women sit and answer the phone. This is not the case in Ghostbusters. The women are the ones who not only physically go out to do their ghost fighting work, but they do all the lab and technology work as well. All of the women bring something to the team, and even the clumsy Kevin plays a big role in the saving of New York City. I loved this about the film -- I'm so tired of seeing women degraded and told they aren't good enough for the hard work that goes into making a change.

It emphasizes the importance of friendship. I know, I know -- this is not a trait exclusive to "Ghostbusters." Many films make sure that friendship is an important theme. But this one struck me differently. At the beginning of the film, once-best friends Erin Gilbert and Abby Yates were not on speaking terms, professionally or personally. The republishing of a collaborative book brought Erin to Abby's eccentric university to confront her, and they weren't on good terms right from the get-go. The women had to see each other's points of view and go through the experience of seeing a spirit together before their friendship began to repair itself. The relationships among the four main characters were not always easy, either. Each woman had some self-doubt and trouble finding her place. As my fave, Jillian Holzmann, puts it in a toast at the end of the film: "Physics is the study of the movement of, uh, bodies and space, and it can unlock the mysteries of the Universe, but it cannot answer the essential question of what is our purpose here, and to me the purpose of life is to love and to love is what you have shown me. I didn’t think that I would ever really have a friend until I met Abby, and then I feel like I have a family of my own, and I love you, thank you." That sums up the importance of friendship in this film and, by extension, the importance of this film.

Even if "Ghostbusters" isn't really your thing, I highly recommend it to anyone who is willing to watch it. It's hilarious, it's empowering, and it's a healthy reminder that not all of the entertainment industry underestimates women.