Why 'Pushing Daisies' Is Amazing

Why 'Pushing Daisies' Is Amazing

The show has been off the air for seven years, yet still continues to touch the hearts of those who watch it. 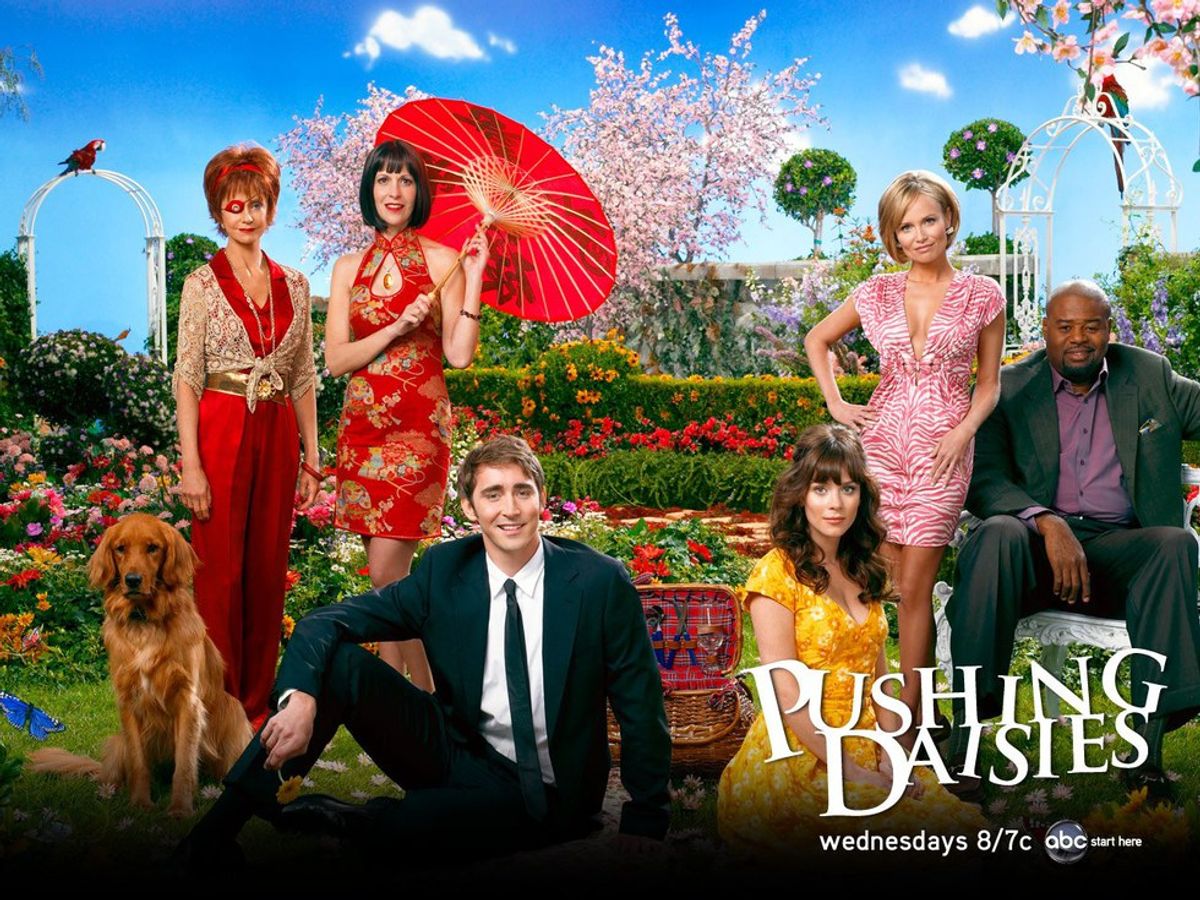 "Pushing Daisies" was a show which was on air on ABC Family from 2007 to 2009. It featured the characters Ned the Pie Maker, Charlotte "Chuck" Charles, Emerson Cod, and Olivia Snook, played by Lee Pace, Anna Friel, Chi McBride, and Kristin Chenoweth, respectfully. It was created by Bryan Fuller, and features Ned, a pie maker who is able to bring the dead back alive- conditionally of course. Ned owns a bakery called the Pie Hole, and on the side works with Emerson Cod to solve murders by bringing back dead victims for a short time to figure out who had killed them. Olivia Snook is a waitress at his bakery, and has a massive crush on him. She aims on winning his affections by taking care of his dog and hoping to hook him with her sweet personality. Everything is thrown off course when Ned brings his old childhood sweetheart, Chuck, back to life. The two fall in love, however, there are complications because if Ned touches her again, she will go back to being dead. The shows two seasons surround these characters placed in a storybook-like town characterized by bright and bold structures and colors, particularly yellows and reds and greens, filled with brutal and grim murders.

This show went off the air in 2009 as it had begun to struggle with ratings. Though taken off the air, in 2015, it was also named the number one show which fans wanted rebooted onto the silver screen. Though unlikely it will return, there are a few reasons why I will continue faithfully to wait for this beautiful, wonderful show to come back on air.

Pushing Daisies has one of the most unique sets in television. It's bright and colorful and the scenery seems to be just as animated as the characters themselves. Matching the dynamic set is the series of wardrobe choices for each character in each episode. Chuck wears brightly colored dresses and outfits, while Ned sports blazers and sweaters with the occasional solid t-shirt while in his bakery. Olive Snook is seen often in whatever uniform she is prescribed, whether it be her waitress uniform in the Pie Hole or her uniform during her time at the nunnery. In the event Olive isn't in a position to be in a uniform, she wears brightly colored dresses.

The characters in "Pushing Daisies" have lives that go very hand in hand with one another, ever intertwining, but separate all the same. Each character goes through changes through each season as a matter of their circumstances, and as much as the characters move the plot, the plot moves the characters. There is a fine balance between the two which is beautiful and very well done, making it truly enjoyable and each character, whether good or evil, secondary or primary, is rounded and dimensional.

Probably the best of all of the characters is The Narrator. "Pushing Daisies" is narrated by an omniscient, third person narrator who speaks with the audience while telling you what is happening in each character's mind during any given moment. He takes the audience back into each character's lives, and details the setting with remarkable clarity, describing the setting and the character's age, down to the minute. The narrator is humorous and has a very soothing voice, and speaks as though he is reading from a children's book about the events taking place in each episode. It creates a stark contrast between the actual occurrences- necromancy and intense third degree murders- and the animated story book like nature of the entire show itself.

Ultimately, "Pushing Daisies" is a well rounded show, with well balanced characterization and plot sequencing, solid narration, and stunning cinematography. It has a bright juxtaposition between a macabre plot line and a bright and sunny visual style similar to that of a story book. Though it has been off the air for seven years, there have been many attempts and efforts both by Bryan Fuller and the fans of the show to bring it back on the air.