Why I'm Not Afraid To Free The Nipple

Why I'm Not Afraid To Free The Nipple

Free the nipple; free the woman. 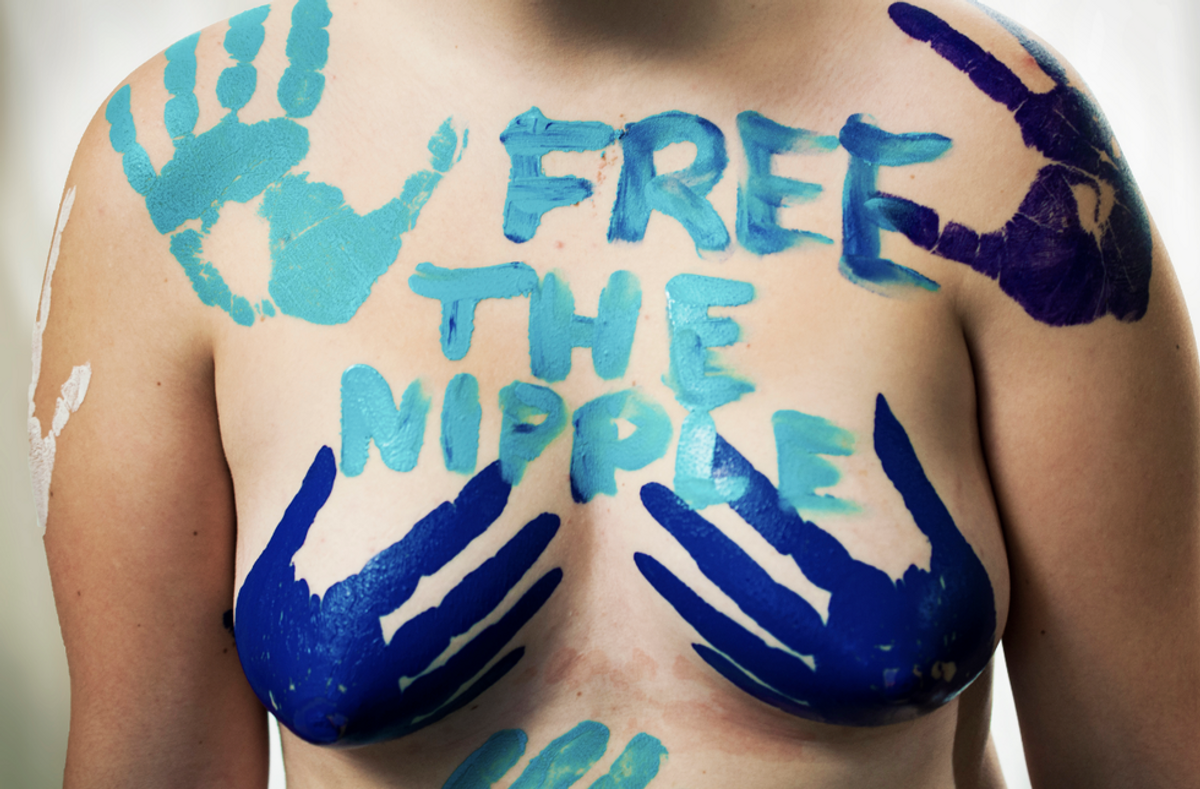 Having my naked body plastered online for all to see has taught me a lot. Mostly, I've learned that nakedness and vulnerability are not synonymous with shame, and that revealing my body does not ruin me. It has not ruined me.

We live in a society where women's bodies are oppressed- considered obscene, lewd, and pornographic. Naked breasts are banned from virtually all social media and censored on our television screens. Breastfeeding mothers are often shamed from publicly feeding their children. We are taught that our nipples are inappropriate, indecent, and shameful. At the same time, we are told that women's bodies are sacred and inviolable. What should really be sacred is the shameless ownership of our own nakedness.

Female toplessness is accepted and praised in many countries around the world, however, in the United States, it is considered a felony. In thirty-five states, it is presently considered illegal for a woman to be topless- including breastfeeding mothers. In some states, toplessness can lead to arrests and fines of up to $2500.

At birth, male and female breasts are virtually identical, including a nipple and areola. Both male and female breasts contain connective tissue, fat, and muscle. During puberty, however, the female body begins to change- along with the societal mindset over what is considered publicly acceptable. At this time, female breasts develop milk-producing lobules, allowing a female to lactate. Lactation is the only differing feature between male and female nipples. This is not a indecently sexual or pornographic component- but is essential for providing food and bond between mother and child. Another difference between men and women's breasts is size. While women's breasts come in a variety of sizes, from relatively flat-chested to extremely busty, it is more common for men's breasts to remain relatively flat. However, male breasts are subject to enlargement due hormonal or weight issues.

At this point you may be wondering: Are we legitimately censoring female nipples because they produce milk? By this logic, should we censor the caps on milk cartons, too?

Women's nipples are considered indecent because they can produce milk and somehow subconsciously indicate thoughts of reproduction in men? This cannot be true. This seems too lackluster to be true. I was expecting to learn that the female nipple contains black magic that is simply too horrific to reveal to the public. Tell me we aren't being oppressed just because of a biological and hormonal difference. Unfortunately, we are.

Fortunately, the jailing of women's bodies is beginning to spark outrage and worldwide conversation about the price of shame. Women are realizing that we should not be degraded because of hormonal differences. We have just as much right to be topless as our male counterparts. Toplessness is not just the freedom to leave your shirt or bra in the laundry- but rather the freedom of knowing that women and men are equal and can freely display their bodies without shame or sexual stigma. By censoring our nipples, society is conveying the message that we do not deserve to be seen. That we must be hidden, covered up, ashamed.

In 2016, little girls deserve to grow up knowing that their nipples are nothing to be ashamed of. By merging the gap between men and women via our bodies, we take steps towards gender equality in all forms. Perhaps one day, we will live in a society where there is no gender gap. By freeing women's bodies, we begin to free the woman.

Free the Nipple is a women's empowerment and equality movement that has sparked an international dialogue about injustice over unnecessary censorship of women's bodies. It is a film, social media phenomenon, and grassroots campaign. I strongly encourage you to learn more about this progressive organization that is leading the fight for the freedom of women's bodies.

Presently, the nipple is stigmatized and over-sexualized. With short term progressive efforts, society will slowly normalize female toplessness. Eventually, the long term effect of female toplessness is the normalization of the naked female nipple and the end of unjust censorship .

We have been oppressed for centuries by those who think women should be ashamed for living freely in their own skin. I believe that owning our bodies and being unashamed of our nakedness is just the revenge WE women need.