My journey, my story, my Why. 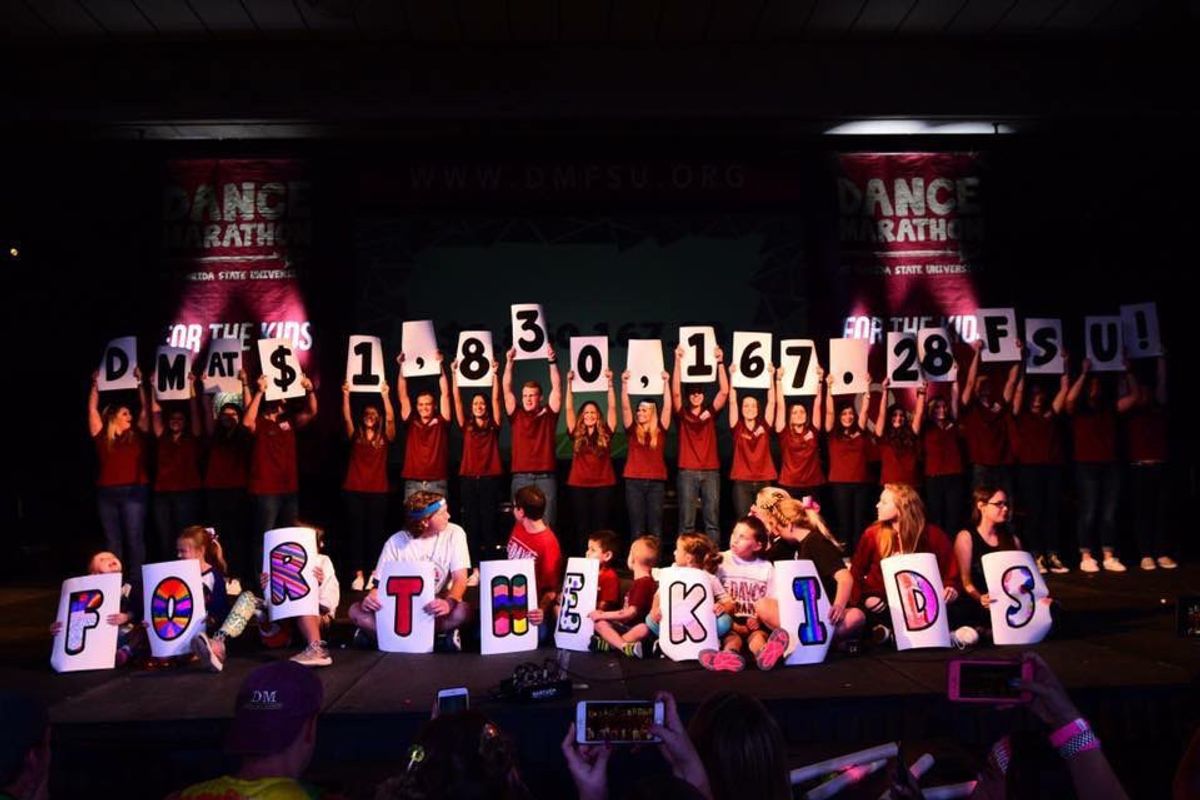 82 hours ago, I arrived at my first ever Dance Marathon. 58 hours ago I left. For 20 hours in between, I stood on my feet.

For just about an hour now, I have been staring at my computer screen attempting to write this piece. From a very young age, I have always considered myself strong at conveying my thoughts through writing. This, in itself, served my main purpose for applying to write for the Odyssey. I constantly had thoughts of all sorts rambling throughout my mind and I sought a place to release them. This week, I have decided to focus and dedicate my piece on Why I #DoMore.

My story begins a couple of years back in my junior year of high school. In February 2015, I learned that my high school would be putting on its first Dance Marathon ever. Prior, I had seen so many family members and friends get involved with DM at their respective universities, always knowing I wanted to do the same. Never did I think I would get the opportunity to do so before ever stepping onto a college campus. Looking back now, I feel so blessed to have been given the incredible opportunity to get involved with such a life-changing organization at such a young age. From the very second I was introduced to this organization, I knew I wanted to #DoMore.

So why #DoMore when you can just "do"? At Florida State University, an individual must raise a minimum of $300 in order to receive an invitation to actually dance at the marathon. As I said before, growing up, the concept of giving back was always a big thing in my home. Fast forward more than two years, I officially registered for my very first Dance Marathon at FSU. I set my first goal as $500, thinking it would be an appropriate and attainable goal. Until just two months after receiving my first donation, I woke up, and I had done it. With a great deal of time left until the marathon, I figured why not raise it to $750? And so I did. But eventually, I reached that goal too. I proceeded to state on Facebook that I would be increasing my goal to $1000 for the kids, hoping I would be able to join the prestigious "comma club." As a first year dancer, this was a huge accomplish to begin with and with the marathon was growing closer, I honestly thought this would be the final number if I was able to get there. This remained... until I reached my goal just over two weeks before the marathon would even begin. That very weekend, I was given the opportunity to tour Shands Children's Hospital in Gainesville. Finally, I could see with my very own eyes one of the greatest beneficiaries of this cause.

Looking back now, this tour was the one thing that changed it all for me. This experience was what gave me the ever-growing and incredible passion I now have for Dance Marathon. I knew it would be a powerful experience, but upon discovering a mother of a miracle child (s/o Amber Ferrell) would be giving me this tour, I knew I was in for something unforgettable. Every floor we visited and every unit we walked through, you could feel her immense gratitude from the very second we begun. She would point to machines, toys, you name it... anything with a Children's Miracle Network (CMN) sticker on it, each time telling us how much our efforts mattered. And you knew she meant it, being that her son was a direct beneficiary of it all. That tour was my turning point.

I continued to raise as much as I could within the two weeks left until the marathon. I continued to increase my goal, accomplishing more than I ever thought I could before. First I hit $1200, then $1500, $1700... finally, I walked into the marathon with $1,740 for the kids. I thought I had reached out to every single person in the entire world. But with every miracle child that stood before me, and every story that I heard, my heart grew fuller and fuller, and my desire to #DoMore grew greater and greater. For the thousandth time, I ran through my contacts list on my phone, as did my parents. I sent more texts, more emails, and made more calls. I continued until the very last possible moment. And finally, I was able to reach over $2,000 for the kids.

In the second to last hour of the marathon, every individual in the room stood in a Circle of Hope. Here, we were able to listen to the words of one last miracle family. I'll place a picture below to show what this looked like. In fact, I actually make an appearance in the background. This family celebrated their child's very first birthday in a Shands Children's Hospital playroom, something that really hit me hard. No child should have to grow up in hospital walls, let alone celebrate birthdays within them.

Within that Circle of Hope, as the Irwin family concluded their story, the miracle families began making their way around. As they went around, the children cut off the dancers' bands given upon their initial entry to the marathon. I couldn't help but tear up as the child before me cut mine off. There are so many children out there who desire nothing more than to rid themselves of their hospital bands forever. We had the ability to remove ours, but too many children don't.

When I saw the reveal of the final number, I completely lost it, along with everyone around me. Not only did we meet our goal of 1.7 million dollars, but EXCEEDED IT. I truly feel so blessed to have been apart of something so incredible, and so powerful.

The following people deserve incredible thank you's for their support throughout this journey I took. It's long, but well-deserved. So thank you to...

When this whole journey began, I knew I wanted to make a change for these kids, but honestly had no idea how much these kids would change me. Just after 4pm on February 25th, I walked into the Donald L. Tucker Civic Center. 24 hours later, I walked out a changed person.

Thank you, Dance Marathon. I'm already counting the seconds until next year. Forever and always, FTK.