Why Are We At War with Our Own Citizens?
Odyssey

Why Are We At War with Our Own Citizens?

A trip through the life of a fictional protester. 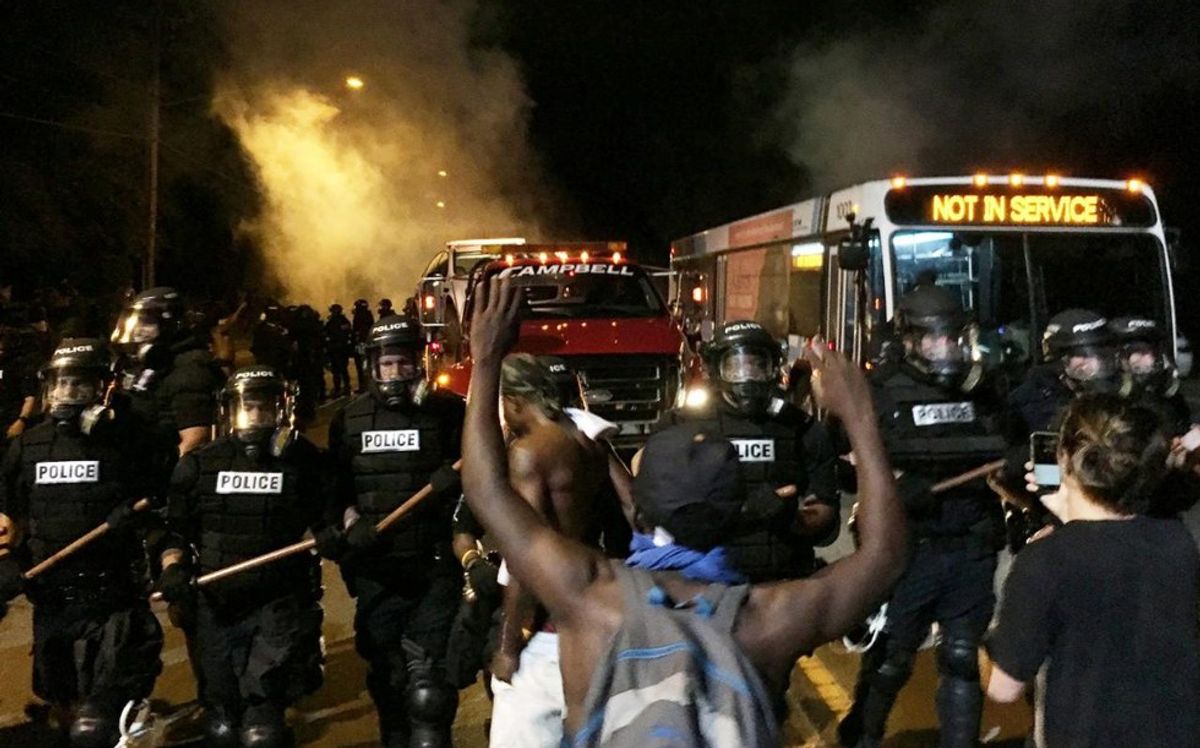 We all know the feeling, when a cop pulls up behind you for a little too long. We start doubting our actions or think about what we could have done wrong. Now imagine the same situation is life or death. Imagine you could be shot and killed even if you are unarmed or free of any guilt. This is the reality for many black Americans. The average road stop could escalate and result in your death. Would you run? Would you be scared? What if this happened to your family? Would you be upset? Would you protest? Or riot? Of course you would! This begs the question, when did we become at war with our own citizens?

As a result of recent events protest have broken out in North Carolina. During these protests, police were summoned wearing full riot gear. They bashed their buttons on their shields. They threw Concussion grenades and tear gas. How did we get to this point? Aren’t police supposed to protect these citizens? What ever happened to deescalating the situation? It seems as though the establishment would want to hear and speak with the protesters, instead they waged war, and we wonder why they riot….

Let’s break this down as I see some confusion on this very issue. I see individuals who think the rioting is proof these people are no good. Black lives matter spray painted on buildings is proof it is a terrorist organization. For a second let’s take a walk through the fictional life of one of these protesters. You were born to a single mother as statistically your father is less likely to be in your life. She has to work sixty hours a week to provide for you as wages are so low, in addition she can’t afford a babysitter so you largely raise yourself. You go to a crowded inner city school which is underfunded and ran more like a prison. The teachers have low expectations and do not challenge you to succeed let alone do your best. You are poorly educated and desperate. The street gangs give you the tempting promise of family and financial stability, but instead, you decide to do it the old fashion way. You can pull yourself up by your bootstraps, right?

You work hard and graduate with decent credentials. You have a hard time getting into a school because you don’t have the privileges other students do such as alumni references and the ability to pay your own tuition. Again you decide to pull yourself up by your bootstraps and work to save up for college. You have a hard time finding a job as many studies show identical resumes with “black sounding” names get less call backs than white counterparts. Never the less you find a job working for minimum wage 50 hours a week. Much of your money goes to housing and expensive as your neighborhood is being gentrified. As you go about your business you are constantly under scrutiny by the establishment. Then one day someone like you, someone who worked hard like you, couldn’t get a break like you gets shot. Of course you are outraged! But what do you do? Do you fight through the system and due process? But you don’t trust the system! Do you push policy and write a formal letter expressing outrage? You can’t you don’t have the education! Do you go out with those from your neighborhood and face the militarized police harassing your family? Of course you do! You don’t know what else you can do, you can only last out the only way you know how. You take your cues from the police. You do exactly what society expects of you. And they call you a thug, entitled, a terrorist.

This is not a stretch of a story. This is the sad reality for many Americans. This is why we can’t just stop talking about race, this is why they riot.