What My Horse Taught Me
Odyssey

What My Horse Taught Me

The truths of learning from a 1000 pound animal. 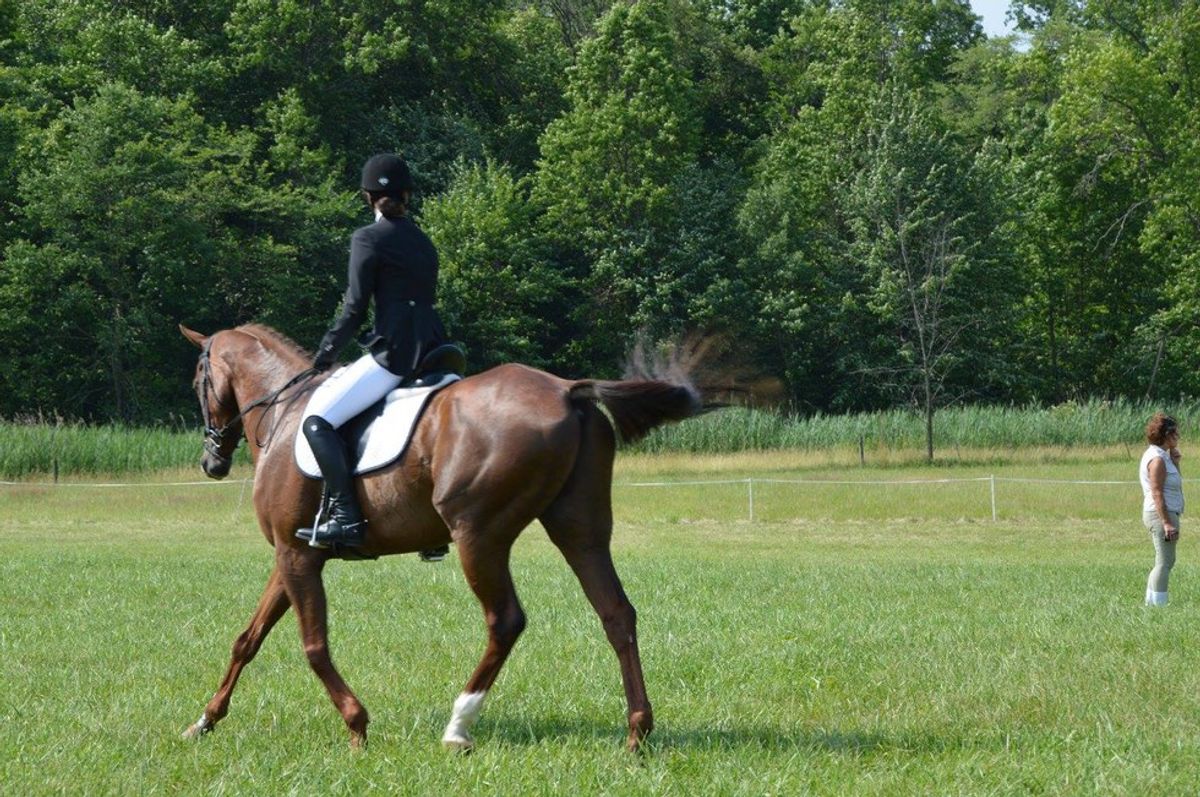 In having been horseless for about a year now, it’s got me reflecting a lot on all the memories I have made as an equestrian. I have been taking lessons since I was seven years old, and it has been one amazing experience. I credit horses with teaching me many life skills, some of which I would like to share.

I was lucky enough to purchase my very own horse when I was 14 years old, a promise my dad made to me and may have regretted keeping. I brought Chance home on November 16th, 2010. I spent the next few weeks in the joyous bliss that I tricked myself into thinking horse ownership would be. It wasn’t all sunshine and rainbows, though. A four year old, stubborn, “red-headed,” Thoroughbred horse turned out to be anything but manageable. I quickly learned that he had quite the affinity for putting things in his mouth, which included, but was not limited to, hair, brushes, clothing, food, and body parts; one time he even ate the zipper off of my jacket. He loved to grab his winter blankets and pull them up his neck until he gave himself a sort-of wedgie with the straps. One of his favorite past-times was throwing his head up and down like Animal, the drummer from the Muppets. He did this at the most inopportune times, whether I was riding him or standing in front of him on the ground. He discharged unpredictable temper tantrums, often unprovoked. He would launch his massive body off the ground, doing anything he could to unseat me.

At first, all of these things were successful in upsetting me a great amount, which Chance would use to his full advantage, getting more and more worked up. Sometimes, it was so bad I would want to give up. One day, I was riding him in a clinic (a special teaching session with a professional rider), and he was engaging in his typical misbehaviors, which to my surprise now included running away with me on his back. The clinician, Eric, addressed me after watching me pull Chance to a screeching stop. He told me not to get upset with him, because that’s exactly what I wanted. I needed to be more patient, proactive, and positive.

I had never approached Chance’s issues quite like that before, and his solution finally resonated with me. The three P’s of horse training. I credit my horse with teaching me a lot of important life skills, and patience was one of them. With a lot of work, I learned to take my horse’s temper tantrums and wild spats in stride. Over the six years that I owned him, he became drastically more manageable. That’s one thing about horses. You can’t change them overnight. It takes endless amounts of early mornings and late nights, carrots and apples, and a whole lot of patience. Especially when your horse is more stubborn than gum stuck to your shoe.

Not only did I just ride, but I also took Chance to shows and events. Competing requires constant preparation, waking up at 5:00AM, waiting long days at the show grounds, and baking in the hot sun. It requires piloting a 1,200 pound animal with a mind of his own through three different patterns and courses in front of a judge, who has no regard for what mood your horse is in or how he is acting on that particular day. Sometimes you win, and sometimes you make a complete fool of yourself (with Chance, I’ve had my fair share of both). And when you’re not at shows, you put up with the constant hay in your hair, the funny looks when you go out in public in your horse clothes, and the total disregard for the fact that you smell like horse manure.

So, you might ask why I’ve stuck with riding for fourteen years of my life. It is not just “getting on their back and going in circles.” It’s so much more than that. I still put up with these wild beasts and unpredictable scenarios because riding these animals has taught me a multitude of invaluable life lessons.

When my boyfriend of six months broke up with me, I drove to the barn to seek solace in the big, brown eyes peering through the stall bars with all the innocence of a newborn baby. Crying into Chance’s mane until I had no tears left, he would cheer me up with a playful shove of his long red and white-tipped nose. He reminded me that with time, things would get better.

I’ve fallen off numerous horses in my riding career—fifteen times to be exact. I’ve been trampled, crashed into fences, and had the wind knocked out of me. Since day one, all of my instructors have told me the same thing—you always get right back on.

The ability to trust each other enough to fly around three and a half foot jump courses at top speeds is unparalleled. Having a partnership with an animal is an experience unlike any other. I wouldn’t trade the countless hours spent at the barn riding, or all the parties and memories I might have missed because I “had to go to the barn.” I have fully embraced the fact of the matter that I am the epitome of a “crazy-horse girl.” Especially now, without Chance around, I have fully embraced the things he taught me. Thank you Chance, for everything.