What Is Ehlers Danlos Syndrome?

It can be a lot to handle. 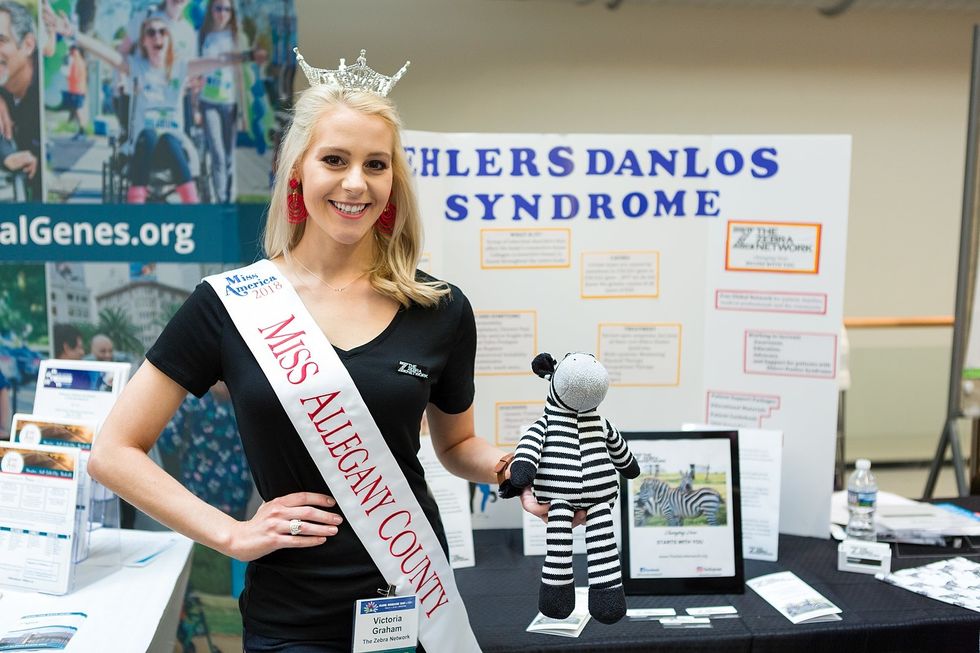 However, there are still plenty of people who still have absolutely no idea that this medical condition even exists. The only way to bring awareness to this condition is to inform, advocate, and educate.

1. It's all about connective tissues

Ehlers Danlos Syndrome (EDS) is defined as "a group of disorders that affect the connective tissues supporting the skin, bone, blood vessels, and many other organs and tissues." This can result in a variety of symptoms including loose joints, fragile skin that is velvety and highly elastic, muscle pain and fatigue, and heart valve problems. EDS is a genetically inherited condition but can also be the result of spontaneous gene mutations.

2. There is more than one type of Ehlers Danlos Syndrome.

Ehlers Danlos Syndrome is a broad term for a variety of disorders. According to the 2017 International Diagnostic Criteria there are 13 EDS subtypes and each subtype is unique and has specific criteria for diagnosis. The most common subtype is Hypermobile Ehlers Danlos Syndrome (hEDS) along with Vascular and Classic EDS. The remaining types are typically pretty rare and include Classical-like EDS, Cardiac-valvular EDS, Arthrochalasia EDS, Dermatosparaxis EDS, Kyphoscoliotic EDS, Brittle Cornea Syndrome. Spondlodysplastic EDS, Musculocontractual EDS, Myopathic EDS, and Peridontal EDS.

3. Ehlers Danlos is a rare condition

Ehlers Danlos Syndrome is classified as a rare condition by the National Organization for Rare Disorders. All subtypes combined can be found in approximately 1 in 5,000 people around the world. The hypermobile subtype affects anywhere from 1 in 5,000 to 1 in 20,000 people. The classical subtype most likely affects 1 in 20,000 to 40,000 people. Only about 60 cases of Kyphoscoliotic EDS have ever been reported.

4. People with Ehlers Danlos most likely have another chronic condition

Most people who have been diagnosed with Ehlers Danlos also have another chronic condition. For example, I have Ehlers Danlos Syndrome and I also have fibromyalgia (a chronic pain disorder). The presence of two or more chronic diseases in a patient is called a comorbidity. Common EDS comorbidities include Postural Orthostatic Tachycardia Syndrome (a condition that affects circulation and the autonomic nervous system), gut dysmotility (malfunctioning of the involuntary muscles that facilitate digestion.), anxiety, small fiber neuropathy (nerve damage resulting in chronic pain), various sleep disorders, and craniocervical instability (joint instability at the top of the neck).

5. Ehlers Danlos Syndrome can present itself in different ways

Ehlers Danlos Syndrome does not affect every person the same way. Some people are able to pace themselves, manage their pain well, and live fairly normal and healthy lives. Others may be bed or wheelchair-bound, unable to work, and rely on a caregiver. Ehlers Danlos Syndrome is a spectrum and everyone experiences the illness in a different way. Most people with EDS are able to mask their pain and go about their day. However, this does not mean that they are not "actually sick" or not suffering. They may just be really good at hiding it.

6. There is no cure for Ehlers Danlos Syndrome

Ehlers Danlos Syndrome is considered to be a chronic illness. This means that it is persistent and does not go away. There is currently no cure for EDS. With that being said, the goal for those with EDS is to manage their symptoms. The most common treatments for Ehlers Danlos Syndrome include physical therapy to strengthen muscles and reduce the risk of dislocation and other injuries, wearing braces or splints, steroids, pain medications, surgery, and various lifestyle changes such as avoiding contact sports.

7. People who have Ehlers Danlos constantly suffer with chronic pain

8. It can be incredibly hard to get a diagnosis

There is an old saying commonly taught in medical school that says "when you hear the sound of hooves, think horses, not zebras." This essentially means that if a patient is presenting symptoms for a large variety of medical conditions, it is more likely that is not something rare. Because EDS is considered to be a rare condition, doctors are often very hesitant to diagnose a patient with it. People with Ehlers Danlos Syndrome (myself included) are often misdiagnosed with medical conditions such as amplified pain syndrome, depression, chronic fatigue syndrome, insomnia, and hypochondriasis. There are only a handful of doctors in the country that specialize in diagnosing Ehlers Danlos. The most common way to diagnose Ehlers Danlos Syndrome is through genetic testing.

Until I was diagnosed with EDS I thought I was just clumsy because I was CONSTANTLY getting hurt. I usually made a trip to urgent care every other week for a jammed finger or a sprained ankle. I realized something was not right with my body when I dislocated my knee while getting my purse out of a car. Not only do those with EDS get injured more often but they also heal slower due to joint laxity.