What Can We Do About The Shooting In Oregon?
Odyssey

What Can We Do About The Shooting In Oregon?

And what needs to happen if there is a chance for these mass murders to cease. 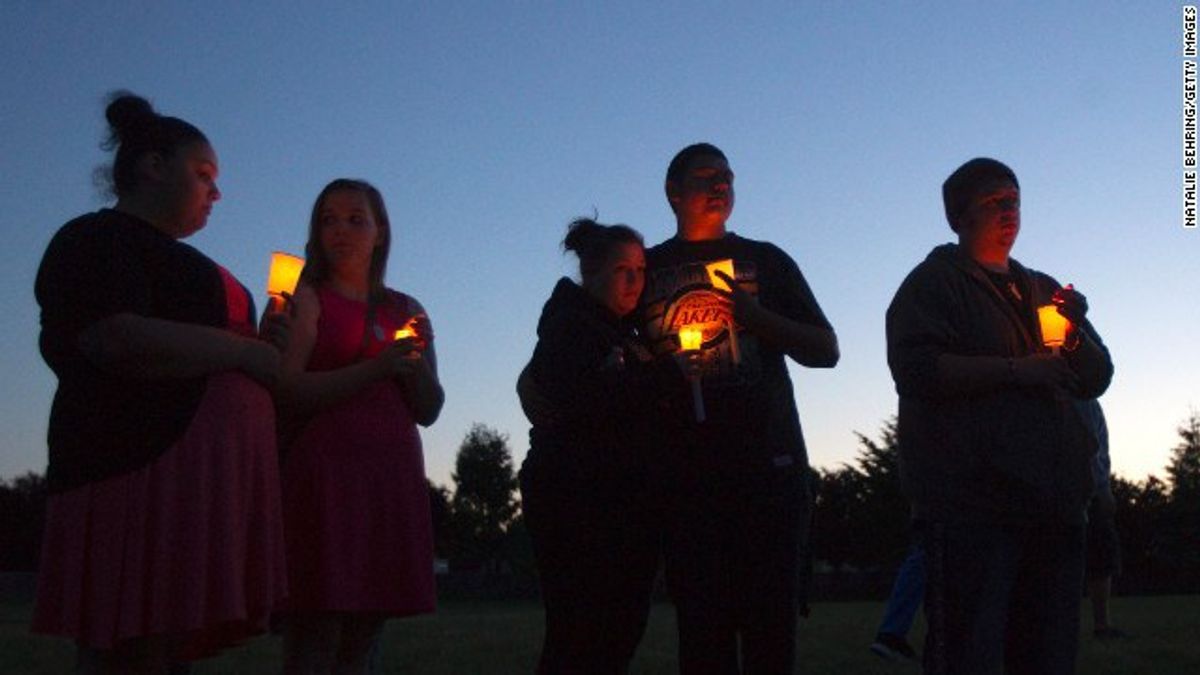 But as I said just a few months ago, and I said a few months before that, and I said each time we see one of these mass shootings, our thoughts and prayers are not enough. It's not enough. It does not capture the heartache and grief and anger that we should feel, and it does nothing to prevent this carnage from being inflicted someplace else in America. Next week, or a couple of months from now. -President Barack Obama, transcript from The Oregonian

On Oct. 1 of 2015, a gunman armed with multiple weapons open fired on a group of students at Umpqua Community College in Roseburg, Oregon. Nine lives were taken, and nine more were put in critical condition. This is all common knowledge by now, but the fact of the matter is that this has become something of a norm in the United States. It seems as though every few months, another unstable individual with access to a firearm either puts innocent people in danger or takes their lives altogether.

While some Americans may take offense to the fact that Obama failed to mention that the attacker was targeting those of a specific faith, I take offense to the fact that some Americans are more concerned with their guns being taken away than with the innocent human lives that are being taken. While it is truly awful that a gunman would target followers of a specific religion, it is even more atrocious that someone would take an innocent human life at all. All lives matter, whether they are a Christian, Atheist, Agnostic, black, white, male, or female. How many mass murders is it going to take before Americans realize that families are being robbed of loved ones on an almost weekly basis, and nothing is being done to stop it?

As Obama stated in his speech given Thursday evening from the White House:

We spent over a $1 trillion and passed countless laws and devote entire agencies to preventing terrorist attacks on our soil, and rightfully so. And yet, we have a Congress that explicitly blocks us from even collecting data on how we could potentially reduce gun deaths. How can that be? This is a political choice that we make, to allow this to happen every few months in America. We, collectively, are answerable to those families who lose their loved ones because of our inaction.

So, if we as a nation are capable of coming up with countless ways to remedy other serious problems, why aren't we capable of solving the issue of gun violence? The answer is simple: gun violence has become a matter of politics, rather than a matter of humanity. As soon as this tragedy occurred, media sources and politicians alike took to social media to begin shouting their opinions and beliefs about gun laws. While stricter policies involving guns are a great way to help remedy the issue, these voices never get anything done. These arguments that go back and forth between political parties only fuel the fire between the two sides. It gets the general public talking, which is also an excellent outcome, but again, nothing substantial ever comes forth. How can we change this on a national level?

There is a gun for roughly every man, woman, and child in America. So how can you, with a straight face, make the argument that more guns will make us safer? We know that states with the most gun laws tend to have the fewest gun deaths. So the notion that gun laws don't work, or just will make it harder for law-abiding citizens and criminals will still get their guns, is not born out by the evidence.

As this chart shows, a significant amount of people are killed by gun violence rather than acts of terrorism. While correlation does not prove causation, trends are still vital to solving problems. If there's even a slight possibility that these two variables are related, it is worth the try if human lives are on the line. How is it that our Congress can push so hard for eliminating abortion or terrorism with the explanation that "lives are at stake," but ignore the same reasoning when it comes to gun violence? Are lives only important inside the womb or when threatened by a terrorist?

A common point brought up, which many gun-enthusiasts attack Obama for regularly, is the fact that a gun ban did nothing to stop gun related deaths in Chicago.

There lies but one problem with this argument: a city-wide ban on handguns does not have any relevance with stricter nation-wide gun policies. For one, an individual could easily go outside of city limits to purchase a handgun. Secondly, those people going to other cities to purchase a firearm would have just as easy a time purchasing a weapon outside the city as he or she would if there was no gun ban in the first place.

We know that other countries, in response to one mass shooting, have been able to craft laws that almost eliminate mass shootings. Friends of ours, allies of ours. Great Britain. Australia. Countries like ours.

President Obama knows that banning weapons isn't the answer here, unless there is a nation-wide ban. However, under the second amendment a law as such would be considered unconstitutional, as the ban in Chicago was ruled last year. What our nation needs is a Congress willing to discuss possible solutions to the problem. For instance, if gun distributes implemented more thorough background checks, that would make it that much harder for someone mentally unstable to purchase a firearm, yet would allow all law-abiding gun owners to make their purchase without problems.

With this information in mind, think about the following questions: are stricter gun policies really such a big issue if they have the potential to save lives? Is a complicated or long process an acceptable solution if it means criminals will have a harder time getting their hands on a weapon? And lastly, does the prospect of a solution not solving a problem entirely outweigh the possibility of it saving at least one person.