Weekend Bingewatch: I Watched ALL The Marvel Movies And Here's What You Need To Know — Part 1

The Marvel franchise definitely gives the people what they want. 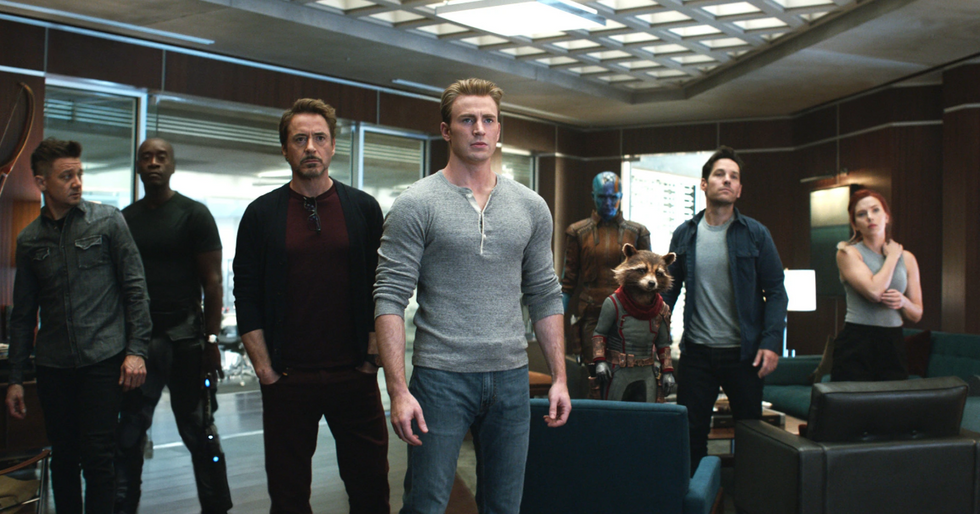 OK, to give you a run down, there are 23 Marvel Cinematic Universe (MCU) movies that all tie together. Starting with "Iron Man" and ending (for now) with "Spider-Man: Far From Home."

So, obviously, you will need more than just your weekend to watch them all. Marvel fans are divided on the best way to watch these movies, whether you should watch them chronologically, or in the order they came out in theaters.

Personally, I think watching them in the order of when they came out in theaters makes the most sense.

Here is a quick synopsis of my opinions and individual ratings of movies one through eight.

"Iron Man" is the first of all the MCU movies and features Robert Downey Jr. as Tony Stark, aka Iron Man. He is a super-genius, cocky, wealthy man who inherited a very successful company from his father creating weaponry for the military.

Tony Stark finds himself in a severe life-or-death situation that provokes him to create the Iron Man suit to save his life. The moment he is rescued is pivotal for his character development in that he realizes that instead of creating weaponry, he needs to use his knowledge and platform for something better, thus, Iron Man the superhero is born.

This film is the foundation for the rest of the Marvel films and the "Iron Man" films are by far my favorite in the entire series. You don't need more than the first "Iron Man" to become TRAPPED into being a Marvel mega fan.

Full transparency, I hated this movie. The biggest deal-breaker for me was knowing that the actor who portrayed Bruce Banner/The Hulk in every other movie was Mark Ruffalo, but in The Hulk's intro movie, he is played by Edward Norton.

The Hulk's schtick is that his human form, Dr. Bruce Banner, was studying what gamma radiation does to humans and tested it on himself, turning him into The Hulk, a giant, green, strong monster-turned-superhero (sort of).

The problem for me with this storyline for me is that it wasn't essential in the Marvel world. I could easily check out a short bio on why The Hulk is the way that he is and not need to watch the movie at all.

"Iron Man 2" was my least favorite of the "Iron Man" movies. My favorite part about this movie was that we are introduced to the one and only Black Widow, aka, Natasha Romanoff, aka, Natalie Rushman.

This movie focuses on media attention around Iron Man where you see his cockiness get even more intoxicating. Trust me, it's a good thing because it is an essential part of Tony Stark's personality. After we see that Tony's health is deteriorating rapidly from the device put in his chest from the first movie, we realize that his cockiness and spontaneity are a final attempt at living life.

This movie's villain is the least interesting and the fight between them really falls flat for me. He is more of just a pest than a calculated villain trying to strategize a plan to win.

Another great part of this movie is seeing Tony's relationship with Pepper Potts grow tremendously.

Thor is the God of Thunder and is known for his hammer, Mjolnir. He is also one of the funniest superheroes. In "Thor," he definitely starts off as a more entitled superhero who always wants to lead conflict with battle, which his father tries to teach him differently by stripping him of his "powers" and sending him to Earth to learn some humanity.

After he heads to Earth, he falls in love and gains humanity which earns him back his powers.

Oh, by the way, Thor is from another realm, called Asgard.

Yes, you read that right, Captain America, aka Steve Rogers, is the FIRST Avenger. His storyline takes place during WWII, making him very, very old, but still very very sexy because he does not age. Why? Because he was initially a scrawny but very patriotic young man who want SO badly to be drafted but wasn't.

He's discovered by a man who sees his potential and patriotism and brings him into training for the military anyway where he has a scientific experiment done on him that makes him absolutely ripped, very fast, and essentially can live forever and ever.

Steve Rogers then fights for America in the war against Hydra, the villain group in the movie's storyline. While fighting, he gets thrown into the ocean and turns into a Steve-popsicle for decades.

This movie shows how loyal and brave Cap's character is, but is not my favorite. I love Captain America, but there's something about his movies that really just don't hit home with me.

The Avengers films cannot be beaten, they are cinematic genius. In the first Avengers film, we see Iron Man, Bruce Banner (Hulk), Black Widow, Thor, and Captain America come together at the hands of Nick Fury, the Avengers' leader, to fight to save NYC.

The film shows Thor's incessantly sneaky and ruthless brother, Loki, working together with evil to get the first Infinity Stone we are introduced to, also called the Tesseract, which is the Space Stone.

Loki unleashes the Chitauri, evil space creatures, out of a portal to terrorize New York City. The Avengers have to find a way to get the Tesseract back, fight the Chitauri, and protect innocent lives — all while stopping Loki. No big deal.

This movie is action PACKED and you get to learn a lot more about the individual characters. We are also introduced to another Avenger, Hawkeye, who is possessed by Loki to help him until Black Widow saves him. His deal is that he is a super, super accurate archer.

Oooh, this Iron Man is the most intense of all three. A lot happens in this movie, and we see a lot more of Tony Stark's vulnerable side. He now suffers from PTSD due to his experience in New York during the Avengers movie.

After Tony's home is destroyed by a new enemy, The Mandarin and his army, his suit drops him off in Missouri where he works with a young boy to restore it and fight the Mandarin. The Mandarin essentially injects people with some sort of serum that turns them to his side and gives them mega-strength and resilience to death and injury.

Essentially, Tony Stark is forced to try and find a way to be a hero and save humanity with an Iron Man suit that isn't 100 percent effective.

In this film, we see Loki is still imprisoned in Asgard after he tried to destroy New York in the Avengers movie. The meat of this film really focuses on Jane, on Earth and in Asgard.

Jane is a scientist and while she is searching for new information on a project, she finds herself infected with the red Infinity Stone, the Reality Stone. It alarms Thor in Asgard and he returns to Earth to save her by bringing her back to Asgard to get help.

They are forced to get Loki's help to escape when they are ambushed by the Dark Elves who want Jane because they want the Reality Stone.

This movie has a lot going on throughout it, but it's nice to see the romance between Thor and Jane grow while seeing a lot more of him on Earth, too.