How Walking With Lions Contributes To The Cruel Canned Lion Industry

How Walking With Lions Contributes To The Cruel Canned Lion Industry

Discover the dark side of lion "conservation." 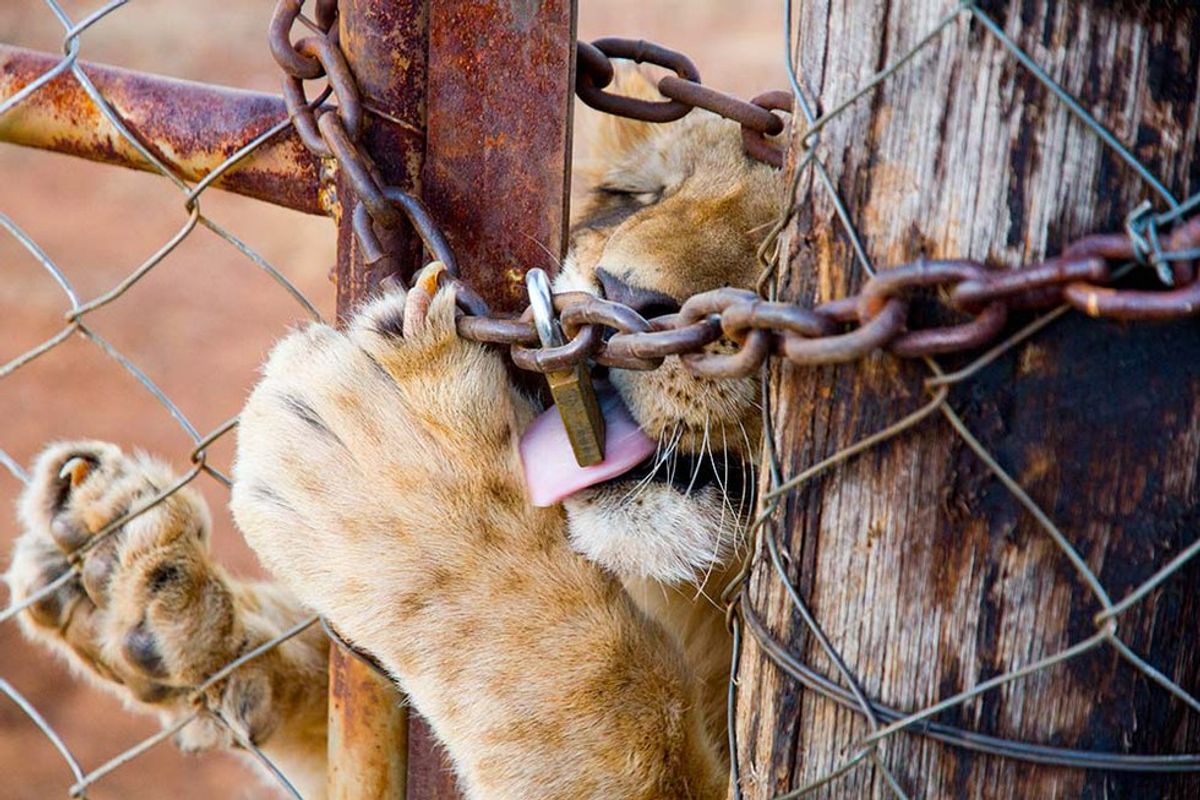 Last year, the world was shocked by the news of a dentist from the US killing the famous lion Cecil in Zimbabwe. It sparked an outrage around the world. Although Cecil was a wild lion, it was a canned hunt in the manner it was carried out. It was the first time the canned lion industry made the world news.

What is canned lion hunting?

More and more lions are being bred for just one reason: being shot to serve as a trophy against the wall. The word canned is being used because these lions are in a confined space with no place to escape, guaranteeing a kill. There are around 8000 lions or more bred for this purpose in over 200 breeding farms. They offer cub petting, walking with lions or trophy hunting. The lions on these farms are tightly crammed in enclosures and, according to reports, are kept in unsavoury conditions and are largely neglected. The lions are basically bred for the bullet. They meet their fate by the shot of a gun or a bow and arrow. This practice is legal in South Africa.

Before the shooting takes place or even before the hunter arrives, he can select online from a catalogue which lion he wants to kill. White lions fetch the highest price. Also, the bigger the lion’s mane, the higher the price. Prices range from $4,000 to $40,000.

When we go only 50 years back in time, they were approximately 200,000 lions across Africa’s Savannahs with now fewer than 20,000 left. South Africa has less than 3,000 lions in the wild. This decline can be attributed to poaching, human/wildlife conflict, habitat destruction and excessive trophy hunting.

How do tourists contribute?

The canned lion industry in Africa involves the captive breeding of lions, which are hand-reared, mostly by volunteers, and pass through a cycle, until they ultimately land up on trophy hunting farms.

Every year, many volunteers travel to South Africa wanting to help the conservation of lions. They pay a hefty sum to raise cubs by bottle feeding them and tending to their needs. They’re being told that the cubs have been rejected by their mother, that the male lions are threatening to kill them, that the mother has no milk or that the cub was sick. Not only does the breeder make money out of this, they also ensure a lot of profits from the cubs by allowing tourists to interact with them as well as hiring them out for a photo shoot, special events or educational school visits. When these cubs grow older, they are being used to walk with them. After that, they are being hunted.

Volunteers are being told the mother rejected the cubs and doesn’t know how to raise them because she was born in captivity. The truth is that these cubs are taken away from the mother soon after they are born leaving both of them very distressed. By removing them, the mother can stop lactating in order to breed as soon as possible.

Some breeders say they’re helping the wild lions because by breeding lions the wild lions are safe. But this isn’t true. Excessive breeding of lions weakens the gene pool with the consequences of inbreeding becoming apparent. That’s why the gene pool has to be strengthened by looking for stronger and bigger lions from the wild. Not only that, hunters sometimes also want to ‘upgrade’ to a wild lion kill.

The future of the lions

Since the death of Cecil, many airlines have banned the transport of lion trophies and a lot of countries restricted the import of lion trophies. This decline is good news, but, unfortunately, there’s a rise for in the lion bone trade. In the Far East bones are being used as a substitution for tiger bones in traditional medicine.

What can you do to help?

Wildlife is one of South Africa’s greatest assets and brings in a lot of money for the country. It’s important to preserve it before time runs out. The canned lion industry is placing these iconic animals at risk which will affect the whole wildlife ecosystem.

What can you do?