Walking Home Alone Late At Night: Don't Do It
Odyssey
CurrentlySwoonLifestyleHealth & WellnessStudent LifeContent InspirationEntertainmentPolitics and ActivismSportsAdulting
About usAdvertiseTermsPrivacyDMCAContact us
® 2023 ODYSSEY
Welcome back
Sign in to comment to your favorite stories, participate in your community and interact with your friends
or
LOG IN WITH FACEBOOK
No account? Create one
Start writing a post
Student Life

Walking Home Alone Late At Night: Don't Do It 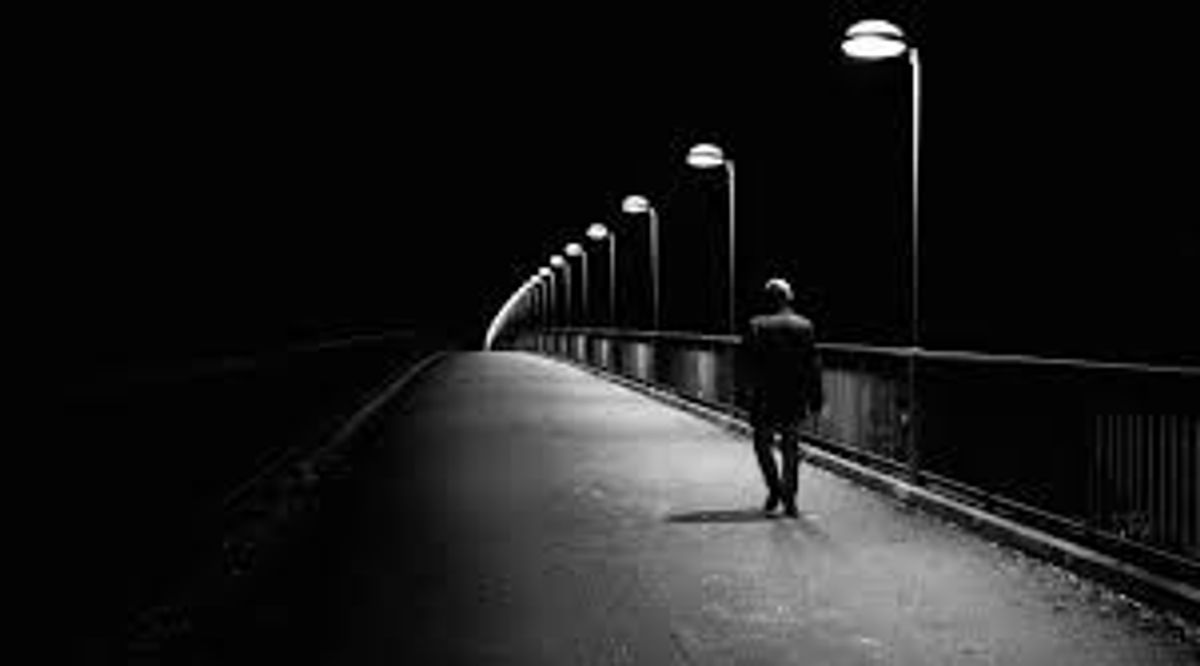 Going into college from high school, you are constantly told things like "be careful when walking home," "always stick with groups," "never leave for home alone" and are even told to carry pepper spray. However, this is something I never really took that seriously. I always thought that Iowa City is one of the safest towns around, and that there's nothing I have to worry about—which was naive of me.

Freshman year, I lived on the West side of my campus, which was a further walk than most to the bars, downtown area, and my friends dorms. Walking home from the bars late at night, or even from my boyfriend's dorm after a night of hanging out, was a regular occurrence. My boyfriend and friends always offered to walk me home, or at least halfway, but almost 90 percent of the time I would refuse the offer and walk home alone. This never bothered me; I would listen to music, talk on the phone, text, or absorb myself in thought the whole way home. Even though there was a bus system, I rarely took it because it was a pain to have to leave when it was scheduled, rather than for me to go home on my own time. There was also Nite Ride, but I never used it. I actually liked walking home alone because it felt serene to me, and I loved looking out over the river late at night.

Sophomore year I lived in my sorority house, and Pi Phi was about a 20-30-minute walk to most of my friends apartments or to the downtown area. Again, I was so used to walking far distances, I was never concerned about the long walk alone late at night. I would walk all the way home, pass a park where homeless people often slept, and past many apartment parties with lots of drunk people, and it never phased me. Nite Ride, our campus bus system for girls, that will pick you up on campus property and drop you off at your home from 10 p.m. to 6 a.m., would be used only after I worked and was too lazy to walk. I would laugh at my friends who refused to walk home without a buddy or who carried pepper spray and called them paranoid or even got frustrated because they would make me leave somewhere early so that they didn't have to walk alone.

But now, as I am beginning my junior year, something has changed in me. I don't know if I have just felt more vulnerable or if I have become more aware of my surroundings, but I realize how dangerous it is to walk home alone when it's dark. First, and this doesn't get said enough, walking home completely sober is still extremely dangerous. There are a few homeless men that sit outside my building and ask me for change every time I walk into my apartment complex, and god forbid if there's a time they get mad if I don't have change for them, they could try to mug me or even follow me into my building. This isn't just about girls, either; I know many guys that have been mugged in Iowa City and/or jumped.

Second, and more prevalent, is when alcohol is involved and you're walking home totally unaware of your surroundings. I can't tell you how many times I would get cat called from cars or even a group of guys as I passed the street. Usually, I would just roll my eyes and keep walking. I began to think: what if one day I couldn't keep walking? Sexual assault on college campuses is prevalent, and this may not be a huge problem on Iowa's campus, but it still happens, and that's enough to stay conscious of it.

Walking home alone at night, especially while on your phone not paying attention like I used to do, raises your risk for unsafe behavior -- whether it be getting mugged, assaulted, injured, or even put in an uncomfortable situation such as cat-calling. You can probably avoid this by walking in big groups home or catching a safe ride from a sober friend or Nite Ride. Don't put yourself at risk and don't wait till something bad does happen for your decision to change. Luckily, realized how unsafe I was being and now I will take more cautionary steps towards walking home late at night. Be safe, even if you feel you're being too paranoid. Trust me, I was naive once too and thought the rules didn't apply to me as long as I walked home and minded my own business. No one can be 100 percent certain when you assume there isn't any danger at all. Make sure you are doing all that you can to get home comfortably, and I promise you that it'll make you that much safer.