We Need To Talk About Violence In America
Odyssey
CurrentlySwoonLifestyleHealth & WellnessStudent LifeContent InspirationEntertainmentPolitics and ActivismSportsAdulting
About usAdvertiseTermsPrivacyDMCAContact us
® 2023 ODYSSEY
Welcome back
Sign in to comment to your favorite stories, participate in your community and interact with your friends
or
LOG IN WITH FACEBOOK
No account? Create one
Start writing a post
Politics and Activism

We Need To Talk About Violence In America

Peace becomes obsolete in humanity when violence is answered with violence. 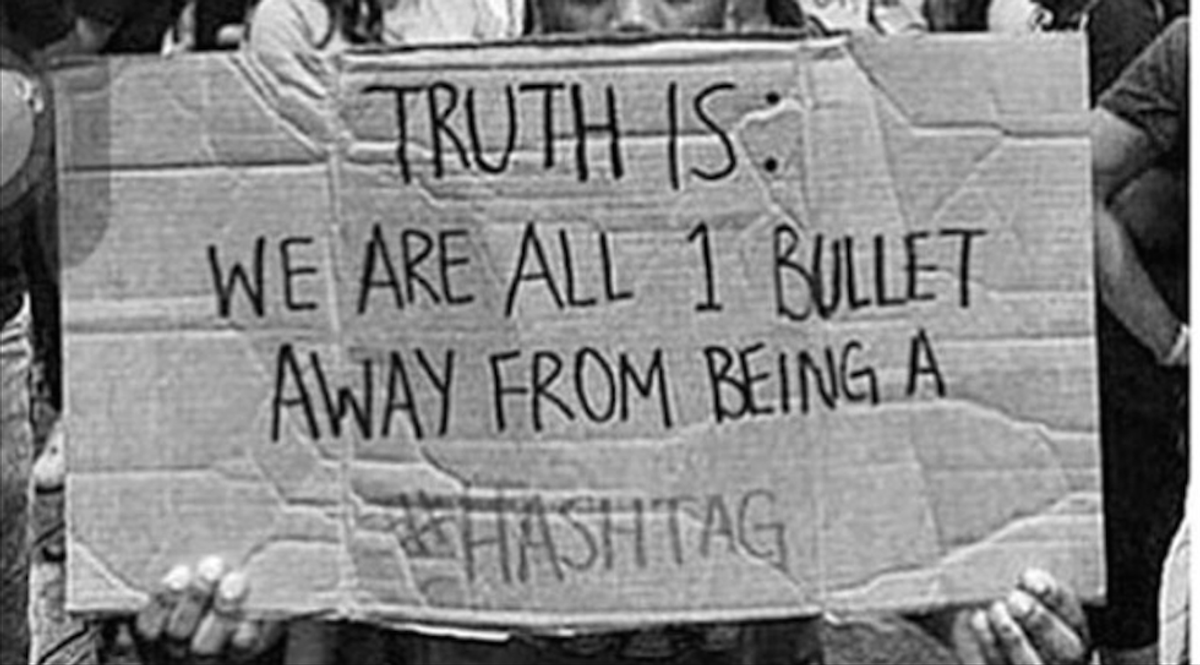 If you haven't been watching the news, then you've seen it on twitter, Facebook, in magazines, newspapers, by word of mouth, or even experienced it first hand: violence. This past week has been a whirlwind of emotions; on one hand we have the joyous celebrations for the fourth of july and on the other we have extreme sadness for the continuous violence that keeps occurring. This violence has rendered men, women and children dead or injured and torn families apart. It has sparked outrage from fellow Americans... and from the media. Violence in America is escalating, and we need to talk about why this is happening and why we need to answer with peace, not more violence.

Every day, why is there always news about mass murders, random shootings, rape, abuse and innocent people being killed?

It's because the internet is watching and counting our culture of violence.

In the past five days the media reported, two young men lost their lives; the reason you believe they were killed is up to you, but they are now gone. They left behind family and friends, jobs and a legacy. These two men were not the only ones who lost their lives: five Dallas officers were gunned down while protecting PEACEFUL protesters, also leaving behind many people who cherished them. If you didn't know, at least seven others were also wounded during this attack.

How do we know all this? There are many media outlets that reported on the shootings as well as an online data base run by The Atlantic. The internet is watching and keeping count of how many people are killed everyday. In fact, magazines such as the Chicago Sun-Times, New York Times and LA Times have a website subsection of their online database that tracts homicides throughout the city.

So, we know that people are being gun downed and murdered, but now we need to ask ourselves why: why is this happening? Why is violence everywhere?

Like I stated before, we are now a culture of violence. How did we end up this way? I can't say for certain, but there is one factor I know plays into our now homicidal and murderous nature and that is answering violence with more violence.

Two young men lost their lives because they were shot and killed by law enforcement officers. These incidents prompted protests in several cities including Minneapolis, Chicago, New York and Dallas. Now, let's focus on Dallas for a second. Peaceful protesters gathered in downtown Dallas in remembrance of Alton Sterling and Philando Castile when shots were fired around nine in the evening. Twelve officers and two civilians shot; four Dallas police officers and one Dallas transit officer were killed.

Violence -- the killing of two men by law enforcement officers -- answered by violence -- five officers killed and seven more wounded by a lone gunman in retaliation to the shootings.

[Side Note: Before you criticize the Black Lives Matter protesters and make a rash judgement about how they caused this to happen, understand that they were being peaceful and respectful in Dallas. If you don't believe me, read this: http://usuncut.com/black-lives-matter/black-lives-...]

What can we do to stop spreading the violence?

It always seems like when something bad happens it is answered with more violence and hasty judgements instead of with peace and negotiation. Every killing ends up another hashtag in the media and instead of uniting as human beings against murders, we become even more divided. Suddenly, it becomes a contrast against black vs. white or blue vs. civilian instead of GOOD VS. BAD, and the media is often escalating the situation.

We have to understand that when someone make a poor judgement call, when a mistake is made that causes someone their life, a nation that prides itself on equality and justice is going to get angry no matter who was killed. Now, we have to find another way to channel that anger instead of more murders.

This article is not meant to cause controversy. This article is meant to bring to light the situation our country is placed in right now. it is meant to educate, inspire discussion and (hopefully) provoke a change in our generation and future generations. It is meant to provoke a discussion about peace and reformation. When we finally understand that violence answered with violence does nothing but promote more hate and intolerance, then we can finally begin to unite.

It's time to make a change in the world.

It's time to be the change in the world.

With all that is being said and done, do not forget Philando Castile and Alton Sterling, and do not forget the five Dallas PD officers killed.