Video games ARE NOT THE PROBLEM but access to automatic weapons that can wipe out the lives of 9 innocent people in a matter of 60 seconds IS ONE HUNDRED PERCENT THE PROBLEM. 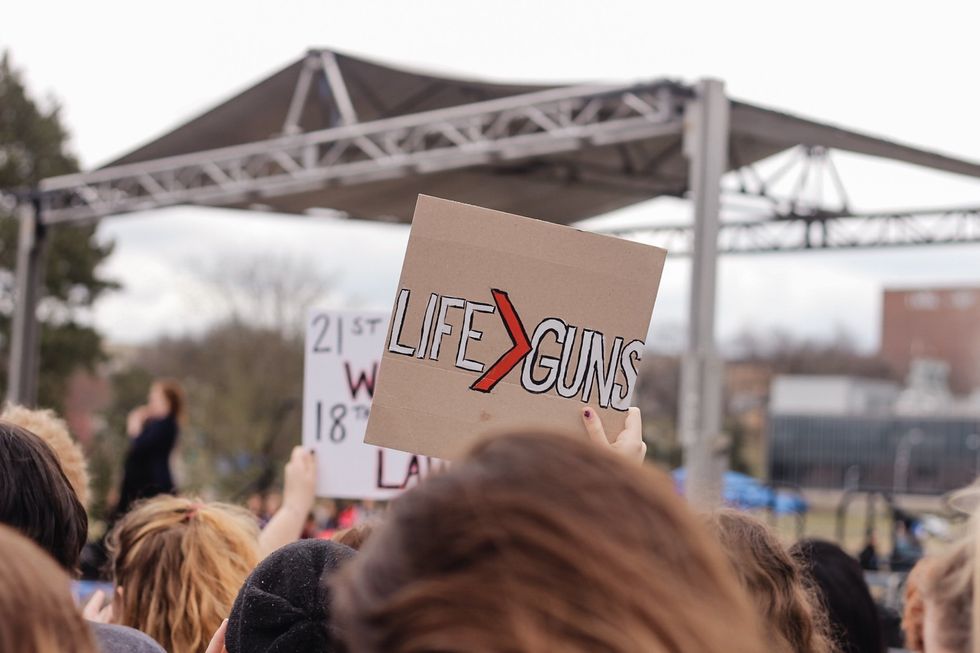 Here we are America, back again with another installment of senseless violence and mass killings to make us cry ourselves to sleep. After the loss of at least 31 innocent Americans this past weekend in two separate mass shootings in Dayton, Ohio and El Paso, Texas, we once again look domestic terror in the face as fascism and racism run rampant across our nation. I mean honestly, we should be used to this feeling by now, right? Desensitized even? Well, not me. And based on my Twitter feed over the last week, you aren't desensitized either.

While everyone in America searches high and low for someone or something to blame, I sit quietly sobbing in the corner in complete awe. I'm in awe of the fact that we are still looking for a scapegoat when the whole reason something so tragic could occur within 24 hours in two separate parts of the country is one thing, a lack of sensible gun control.

To make matters worse, the idiot in charge (who is also a huge factor in why so many white men feel emboldened to open fire on innocent lives) is blaming social media, mental health and of course every angry mom's favorite scapegoat, video games.

SHOOTER: I was inspired by trump. MEDIA: what could have caused this? SHOOTER: look at this cool photo of the wo… https://t.co/NBqAmvQdpn
— Imani Gandy (@Imani Gandy)1564932724.0

I have a bundle to say on this topic but let's stick to why video games ARE NOT THE PROBLEM and access to automatic weapons that can wipe out the lives of 9 innocent people in a matter of 60 seconds IS ONE HUNDRED PERCENT THE PROBLEM.

Video games have been my saving grace in some of the darkest times in my life and I know that can be said for most of us in the gaming community. Yes, even the violent ones serve some sort of purpose in helping us cope with stress. In fact, more often than not, finding solace in having the best Kill/Death ratio in a violent video game has kept me from inflicting pain on myself or completely losing my shit on someone else.

For most Millennials, we can't help but laugh that you would foolishly blame a community rooted in relaxation, teamwork and FUN for such senseless acts of violence that are so clearly rooted in a commitment to destruction and division inspired by Donald Trump and his "real-talk" (basically what I mean by "real-talk" is racist bullshit, you get that, right?) politics.

My generation watched 2000 people die on live television when we were 10 years old. Then we watched countless lives wiped off the plane of existence year after year, month after month, while our schools, places of worship and neighborhood stores were gunned down because of easy access to incredibly deadly weapons.

I have spent thousands of hours in video games killing imaginary characters with imaginary weapons. But you know what I've never, ever done? Thought about actually killing someone. Because video games have nothing to do with it.

I know you might think that if we regulate the purchase of these deadly weapons then they will just become available on the black market, well sure, you're right. But that's why we pay federal taxes, so the FBI can find those guys and add them to watchlists. Get logical.

If we as a nation continue to look for solutions in places where there are none, we will only see the loss of more lives. If you feel like shit this week, WHICH YOU SHOULD. This is a reminder why you need to VOTE IN EVERY ELECTION, big and small. Now go be the change you want to see in the world, oh and call your congressperson and tell them how you feel.