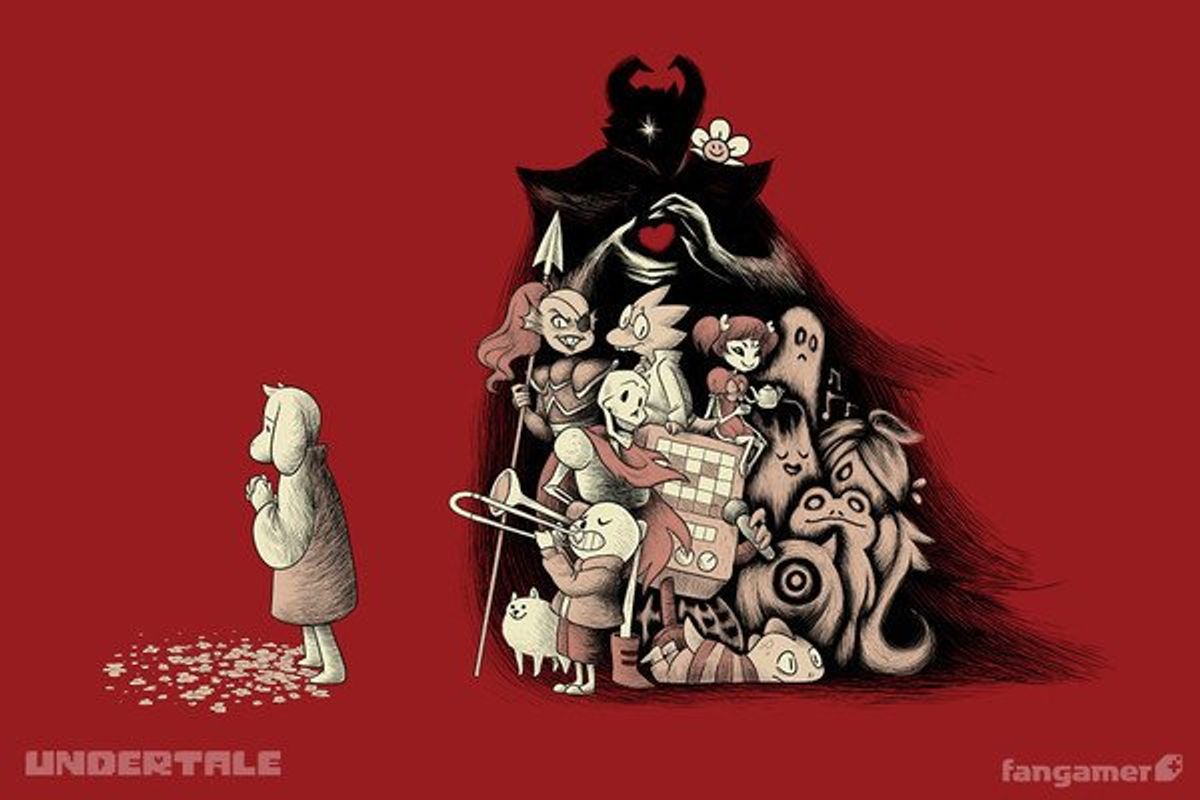 Spewing forth from the genius of mostly one guy, Toby Fox introduced the gaming world and culture to new concepts in storytelling and gameplay mechanics in video games with his opus so far: "Undertale." And the most impressive thing is: He did this with just the passion in his soul and the support and financial backing of a Kickstarter.

Before we go into praising the most popular indie game of recent memory, we must attribute its roots. Fox was in love with "EarthBound" as a kid and young adult. "Undertale," in major part, was inspired both aesthetically and conventionally from the likes of that 1995 SNES gem. "EarthBound" was an RPG that rocked the genre, providing a unique setting of modern Earth, unlikely protagonists in a group of children and a quirky set of maps to explore and beat up even weirder enemies in. "EarthBound" was just as much a parody of the genre in which it was based as it was a great game on its own merits.

And then came along the cult fan following of "EarthBound" and the "Mother" series of which "EarthBound" was the second in the trilogy. The most prolific fanbase congregated in a once small website named Starmen.net, and Fox was one of the young kids who pledged themselves to the ever-growing community Earthbound inspired. It would turn out that "EarthBound" inspired more than just his ROM hacks and friends that he would make on the site; it would lead to the creation of one of the most unique games this century.

"Undertale" reached critical claim immediately upon release (it is still one of the highest rated PC games of all time), and the commercial success followed soon after which lets players and fan artists rejoicing in everything Fox’s game had to offer. This all happened in such an explosive way because "Undertale" is indeed so unique. It combines the niche quirkiness and character of "EarthBound" with the viral sensationalism of "Five Nights at Freddy’s" to create a gaming juggernaut that only has room to thrive over the vast obsession-filled pool of the Internet. The thing is though: "Undertale" deserves all that praise and more.

First it is obvious that "Undertale" is simplistic in its visual design. This is purposely so in order to call back to the nostalgia of 16-bit platforms and serve up modern proof that a masterpiece does not need to rely on graphical prowess in order to be a sensation and a deserved one at that. The sprites of the characters and their animations in the bright environments all manage to shine with a magnificent color and personality because of the game’s visual simplicity. So much love and care was poured into making every monster likable and redeemable so that the gamer would experience feelings with any palette of sprites in "Undertale."

The music backs up all of this as well. Fox does an incredible job fixing together a soundtrack that will ease your mind with songs like "Ruins and Another Medium" while traversing the world. But during boss fights (of which there are many with varied gameplay mechanics), tunes like "Asgore" and "Battle Against a True Hero" crank up the tempo with beats that will be eliciting many emotions from you on their own.

However, the most genius thing about "Undertale" is how it so effortlessly and gorgeously blends story and gameplay together in immersive harmony that few, if any, games have ever accomplished so wonderfully. The first and most crucial ingredient is player choice, and you would know this if you have ever set foot into the underground or have even seen the advertising for "Undertale." As the human who has fallen into this new place beneath the crags of Mt. Ebott, you have the simple yet elegant choice of either fighting to the death with the beasts that you encounter or sparing their lives through an elaborate thread of actions that can lead to mercy.

This pivotal mechanic allows the player to switch up their styles of play, allowing for infinite "replayability" and options to kill or spare the most minor of enemies or the major bosses who also turn out to be lovable, three-dimensional characters if you take the chance to know them. That is the thing though. You have to take that chance, that risk, to get to know them. They may even want to kill you at first, so only you can choose what kind of person you are going to be.

Are you going to take the easy way out and plow your way through all the monsters in your way and commit mass genocide just to reach the highest level?

Are you going to mix it up and only kill things when you cannot figure out how to beat them with kindness?

Or are you going to try your hardest to find the path to mercy for all monsters and potential friends and learn to be a beacon of hope for the underground?

Every action you take in pacifist, genocide or neutral play-throughs affects the story and how the game is even played on its most basic level. Characters will react to you differently. Bosses will waver their difficulty setting depending on what you have done. Most importantly for some too, the ending you receive will change drastically depending on your choices and yours alone.

This may all sound complicated, but "Undertale" also knows how to make itself as accessible as possible. The story starts out simplistically at first: you are a human boy or girl who falls down a pit into a world filled with monsters. There was a war that brewed bad blood between humans and monsters in ancient past. "Undertale" gives you a setup and then truly makes you feel like you are the most powerful driving force in Toby Fox’s scripted scenarios of good and evil within you, the player, happening in the underground.

As you progress too, you find out just how deep and complex the lore, RPG combat, character and puzzle system is in "Undertale." Different bosses have different ways to be defeated whether you are shooting Mettaton in a pseudo third-person shooter segment, hopping over Papyrus’s obstacles like in an old-school 2D platformer, timing out plane switches against the spider girl Muffet or dodging Undyne’s insanely fast glowy spear projectiles.

Even the simplest of monsters like Froggit and Whimsum you meet in the first area in the game have different personality archetypes with which to play with. Will you hurt their feelings by saying something they may or may not understand or will you join in their antics and make them feel better? You decide either way.

On top of these engaging gameplay mechanics, the story too develops into one unique and relatable in its own right. Characters you interact with end up having interconnecting, emotional pasts. Bosses you perceive as the greatest threat can turn out to be the biggest softies, and innocent-looking creatures can end up being self-loathing pessimists. "Undertale" not only plays with your emotions by revealing more under the surface layer, but it also manipulates the way you feel in real life.

The true perfection of "Undertale" lies in its ability to make you care so much about fictional characters and lines of code in ways you would feel about your friends in real life. And as the player, you accept the responsibility to love them or the burden of destroying all their hopes and dreams. You decide.